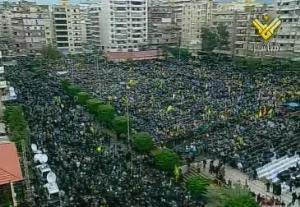 Tens of thousands of Lebanese, Palestinians and Arabs responded Monday to Hizbullah Secretary General Sayyed Hassan Nasrallah and gathered in Beirut's southern suburb in solidarity with Gaza and to pay tribute to the 318 martyrs who fell so far in the "Israeli" barbaric attack on the Strip.

Despite the cold weather and rain, the Raya field and surrounding areas in Dahiye were full with protesters hours before the rally began.
The waved Palestinian, Lebanese and Hizbullah flags and shouted anti US and "Israeli" slogans and calls for Egypt to take a historic stance in support of Gaza amid a suspicious official Arab silence.

Sayyed Nasrallah addressed the protesters through a wide screen and praised their resolution and determination to support their brothers in Gaza.

"I thank you and appreciate your response to the call to support Gaza. Today you are expressing your constant commitment to respond to this yearly call (Ashoura) and today is one of Imam Hussein's days and one of the days of Jihad and martyrdom. Today you are responding to the call of this great Imam Sayyed Ali Khamenei for this nation to express solidarity and pride in the martyrs. To Gazans I say: your pain is our pain and your wounds are our wounds."

His eminence stressed the whole world should understand that Gaza is not alone and that some media outlets, the retreat of some Arab political elites and time can never take Palestine from the hearts and minds of the nation. "Palestine will remain right and "Israel" will always be wrong," the Hizbullah leader said.

"Today we meet again to express pride in the martyrs of Gaza, because we are the nation of martyrs and we bear the culture of martyrdom that is the culture of life with dignity. Those martyrs have fallen in the greatest most sanctified battle. Those are the martyrs for the sake of Allah, on His path where there is no room for abandoning a grain of sand from our sacred land," Sayyed Nasrallah added.

His eminence reiterated that everyone should act responsibly with regards to the situation in Gaza. "I don not want to repeat what I said yesterday but I would like to add something. On your behalf, I call on Lebanese President Michel Suleiman as a consensus president to spare no effort to push for holding the Arab summit because some sides are already trying to frustrate it.

Today, Lebanon's position should support Gaza and should not take the same side as this or that Arab regime. The president is cognizant of Lebanon's triumphant experience in 2006 and based on this he is requested to play a central role and hear his brave voice in support of the oppressed Palestinian people in any summit just as we heard him in the conference for the dialogue of religions."

Sayyed Nasrallah urged the Palestinians everywhere to unite and cooperate. "It is wrong to believe that this war is waged against Hamas. It is in fact waged against all the Palestinians and their will, right and determination. The US administration's scheme is to establish the Zionist entity over the heads of all Arabs in the region. It does not care who governs Arab states.

In principle, the US administration has no objection if an Islamist, extremist or fundamentalist rules any Arab country. What's important for the US is the ruler's political program and his stance regarding "Israel" and the US; will he sell his oil and yield to Washington and Tel Aviv's political and economic terms or not? Will he abandon his rights and the rights of his people or not? That's what governs the US position concerning any political regime in the Arab and Islamic worlds. The US administration regards any Islamic party according to its position from "Israel" but not according to its religion, religious rites or ideology.

"Israel" and the US problem with Hizbullah is not based on the party's religious nature. If one Hizbullah leader calls Washington, and they really wish we'd do this, and told the American that we are ready to discuss our weapons, our resistance and our sovereignty, the American will help us govern Lebanon. Their real problem is with our political program that refuses to abandon prisoners, land and sovereignty."

The Hizbullah chief also stressed the target in Gaza was the remainder of the resistance and the will of the Palestinians. "This is why I support all call for a third Intifada in Palestine and similar uprisings in the Arab and Islamic worlds. We call on all Palestinian factions to unite and work on stopping this aggression without allowing the "Israelis" to achieve their goals. We also call on Arabs and Muslims to continue action because the aggression continues.

The Qana massacre in the "Israeli" war of 1996 changed the formula and the second Qana massacre changed the formula of the 2006 "Israeli" war on Lebanon, however the difference between these wars and the war on Gaza is that "Israel" began its aggression on the Strip with a massacre which means they are determined to exploit every second to achieve their goals and this is why Arab rulers are requested to exert real efforts to stop this.
People have begun taking to the streets of Arab capitals and this is a good sign that we did not witness during the 2006 war. This also means a real improvement in the position of the peoples."
Sayyed Nasrallah said he had expected he would be assailed after his Sunday speech, yet he firmly said that defending Gaza is worth offering blood and being blasphemed or insulted in much less that offering blood. "We are all engaged in the battle of the nation and the battle to awaken awareness against delusive campaigns. Yesterday I hears one of the Arab blasphemers and liars saying that Hizbullah has bombarded the Egyptian embassy in Beirut. What kind of lies are these. We avoided going to the Egyptian embassy because of the sensitivity of the situation.

All we are doing is peacefully asking the Egyptians to change their position. I also read prominent Arab journals accusing Hamas and the resistance of selling their people for the sake of regional powers and regime and they named Syria! What is Syria's interest in killing civilians in Gaza?

Syria took the initiative and stopped its indirect talks with "Israel". And is Hamas really defending Iran in Gaza? These are trivial and hateful accusations regardless of their source. Resistance factions are defending their people in Gaza. They accuse the victim of being faithful to their people.

The people of Gaza are the purest and most honorable people, and those who abandon them are participating in the crime, killings and treason. We have been calling to open the Rafah crossing; today if you hear all speeches you will see that the calls for Egypt to open the Rafah crossing are unanimous. We are talking about steadfastness in Gaza and the first condition to consolidate steadfastness there is to open the gates for it."

Sayyed Nasrallah underlined "what would settle the course is the battlefield and the steadfastness of the people and the political and military leaderships."

"Persistence in firing rockets is an indication to power in the battlefield. What is happening in Gaza today is similar to what had happened in Lebanon in 2006. Settlers living 40km from Gaza will stay either in shelters or outside their settlements. The war in Gaza is a matter of time, and the "Israeli"s can't endure a long war.

Questions about the feasibility of the war will emerge soon. In Lebanon, "Israel's" strategic stockpile of missiles was depleted and the "Israeli" air force failed to achieve its goals although there were many martyrs, many injured and many destroyed houses, however we did not lay down arms and our will was not taken from us. "Israel" is involved in a psychological war campaign against the Palestinians through news about masses of soldiers and tanks preparing to storm into Gaza. But when they begin their ground offensive, they will begin to lose as they will be faced by brave resistance fighters."

The leader of the resistance addressed Egypt and renewed his call to open the Rafah crossing. "We are asking Egypt and the Arab leaders to secure the requirements of steadfastness for the Gazan population if they were not able to stop the aggression."

His eminence concluded his speech by urging Arabs and Muslims to keep working on all levels to back the Palestinians in Gaza, "and I hope that you would remain alert to respond for future calls, positions and decisions."