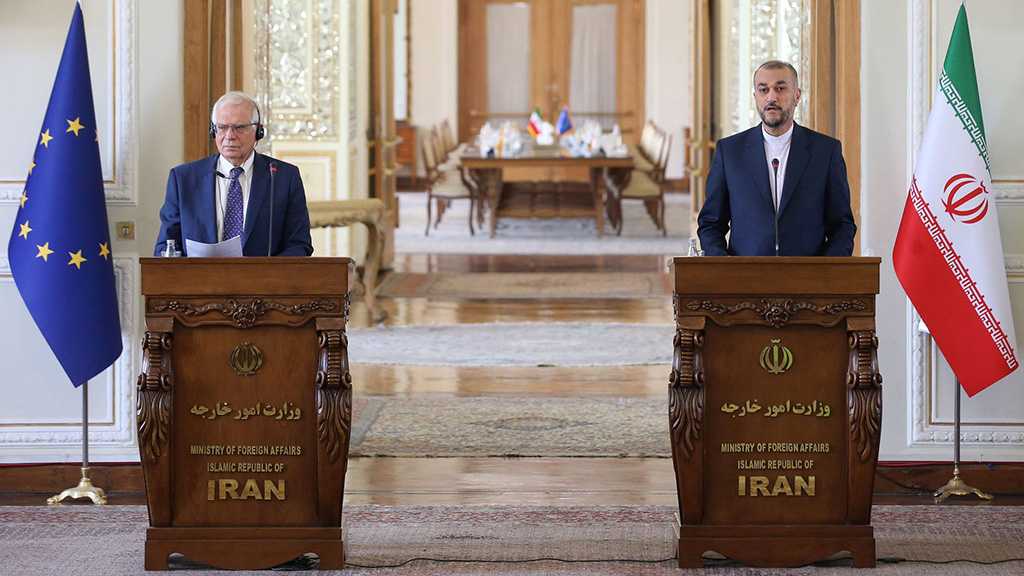 Iranian Foreign Minister Hossein Amir Abdollahian says the United States must set aside its extravagant demands and instead take realistic steps toward reaching an agreement on the revival of the landmark 2015 Iran deal.

Amir Abdollahian made the remarks in a telephone conversation with the European Union’s foreign policy chief, Josep Borrell, on Monday evening, praising the continuous efforts of the top EU official and those of his deputy Enrique Mora for the restoration of the Iran deal, officially known as the Joint Comprehensive Plan of Action [JCPOA].

Iran’s top diplomat also briefed the EU foreign policy chief on his recent talks with Italian and French counterparts, Luigi Di Maio and Catherine Colonna respectively, stressing that Washington should abandon the ineffective approach of the past and the sanctions it has slapped against Tehran as part of the so-called “maximum pressure” campaign.

“There is no doubt about the Islamic Republic of Iran’s determination to reach a good, strong and lasting agreement,” Amir Abdollahian highlighted.

Elsewhere in the telephone conversation, the Iranian foreign minister elaborated on Tehran’s approach to food and energy security and pointed to the tripartite meeting between the presidents of Iran, Russia, and Turkey in Tehran.

Amir Abdollahian also referred to his recent conversation with Ukraine’s Foreign Minister Dmytro Kuleba, and noted that it is of great importance to facilitate the unhindered export of grain from Ukrainian ports.

Borrell, for his part, appreciated the positive and serious will of the Iranian side during the JCPOA revival talks and underlined the need for collective proposals to break the impasse.

The EU foreign policy chief also lauded Iran’s initiatives to overcome the remaining obstacles and disputes to reach a final agreement, emphasizing that he and Mora would spare no efforts to facilitate and accelerate the process through communication and consultation with all parties involved.

Iran and the US concluded two days of indirect talks, mediated by the European Union, in the Qatari capital of Doha, late last month in an attempt to break the stalemate in reviving the JCPOA.

At the end of the talks, Iran and the EU said they would keep in touch “about the continuation of the route and the next stage of the talks.”

The talks in Doha followed seven rounds of inconclusive negotiations in the Austrian capital of Vienna between Iran and the five remaining parties to the JCPOA since April last year.

The Vienna talks were put on hold as Washington insisted on its refusal to undo its past wrongs through measures such as removing the Islamic Revolution Guards [IRG] from its foreign terrorist organization list.

Iran maintains that the IRG’s designation in 2019 was part of former US president Donald Trump administration’s so-called maximum pressure campaign against Iran, and, therefore, it has to be reversed unconditionally.

Meanwhile, the United States on Monday threatened Iran with fresh sets of sanctions if Tehran does not succumb to its excessive demands.

Pentagon Press Secretary John Kirby alleged in an exclusive interview with CBS News television station that US President Joe Biden believes the best way to resolve Iran’s nuclear case is through diplomacy and a negotiated settlement.

However, he claimed that it’s up to Iran to decide whether it wants to have the sanctions removed or not.

“All they have to do is to comply with the deal that is on the table right now. If they don’t, then President Biden made it very clear that we are going to work with our allies and partners in the region and in Europe to increase pressure on Iran. At the same time, we are making sure that we have the appropriate military capability in the region to defend our national security interests,” Kirby said.

The senior US official added that Washington will impose more sanctions against Iran if the Islamic Republic does not agree to its demands.

Separately, Ned Price, the spokesman for the Department of State, echoed Kirby’s remarks.

“We continue to believe under that framework that a mutual return to compliance with the JCPOA is the most advantageous course that remains viable, and we’ll continue to pursue that as long as it’s in our interest,” Price said.