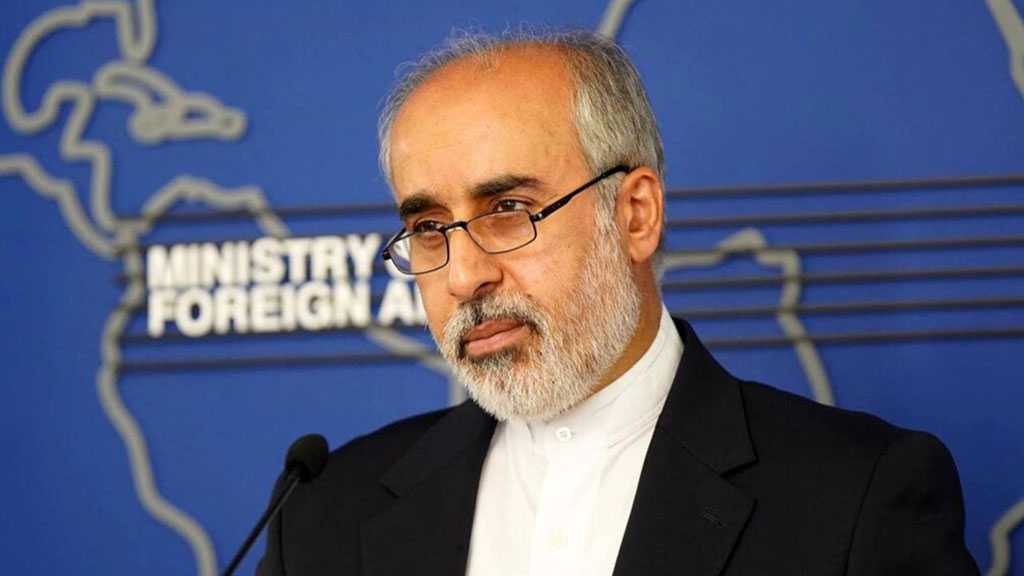 Iran’s foreign ministry spokesman on Monday derided US President Joe Biden for his unsubstantiated claim about Iran’s peaceful nuclear program, calling out double standards of the US military-industrial complex.

In a Twitter post, Nasser Kanaani said Biden’s declaration of stopping Iran from “acquiring a nuclear weapon” ironically came on the anniversary of the world’s first nuclear explosion, carried out by the US.

He said the remarks, made by the US president during his maiden West Asia tour last week, were aimed at pleasing the apartheid ‘Israeli’ regime as the Islamic Republic has never sought nuclear weapons.

“Irony of our times: just on the anniversary of 1st US nuke test & after visiting an outlaw regime that possess clandestine nukes, Mr. Biden stresses that he would not ‘allow’ Iran to build bombs,” Kanaani said in his tweet.

“Sales pitch to charm the ‘Israeli’ apartheid regime by bombs that Iran has never sought.”

On Thursday, after signing a joint declaration against Iran with the Zionist regime’s acting premier Yair Lapid in the occupied al-Quds, Biden said the US “will not allow Iran to acquire a nuclear weapon.”

He later repeated the rhetoric during a regional summit in the Saudi port city of Jeddah, on the second leg of his four-day regional tour.

The tour coincided with the 77th anniversary of the world's first nuclear explosion which occurred on July 16, 1945 in the US state of New Mexico.

The test, code-named "Trinity," was of a plutonium implosion device and the total yield of the explosion was 21 kilotons, more than 1.5 times larger than the Hiroshima bomb.

New Mexico residents were left to deal with the massive amounts of dangerous fallout from the explosion that was so bright it could be seen more than 280 miles from the test site.

Of the 13 lbs of plutonium in the Trinity bomb, only around 3 lbs exploded and the remaining 10 lbs rose into the atmosphere as a cloud of heavily contaminated soil and debris, casting fallout across an area nearly 250 miles long and 200 miles wide, according to independent accounts of the tragic incident.

Iran has repeatedly maintained that its nuclear program is for peaceful purposes only, in line with a religious decree issued by Leader of the Islamic Revolution His Eminence Imam Sayyed Ali Khamenei against weapons of mass destruction.

Kamal Kharrazi, the head of Iran’s Strategic Council on Foreign Relations and the former foreign minister, in an interview on Sunday rejected allegations that Iran seeks nuclear weapons.

He asserted that the Islamic Republic possesses “technical capabilities” such as increasing the level of uranium enrichment beyond the current 60 percent, but will not go down that path.

Russia's permanent representative to international organizations in Vienna Mikhail Ulyanov also stressed on Sunday that Iran’s capability does not mean the country has any plan to pursue a nuclear weapon, blaming Washington for the current standoff over Iran's nuclear deal.

“Capable does not mean willing or planning. In any case the current situation with the nuclear program of Iran is the product of maximum pressure policy of Trump/Biden,” Ulyanov said, referring to former US President Donald Trump and the current leader Joe Biden.

The Iran nuclear deal, officially called the Joint Comprehensive Plan of Action [JCPOA], was abandoned by Trump in May 2018.

Biden initially pledged to reverse the previous administration's measures and return to the deal, but it has failed to walk the talk.

Tehran insists that all sanctions must first be removed in a verifiable manner before the Islamic Republic reverses its remedial measures and returns to the full compliance of the deal.

Since April last year, Iran and the remaining signatories to the deal have been engaged in marathon talks to salvage the accord and seek a reversal of Trump’s ‘maximum pressure’ campaign against the Islamic Republic.

But the indecisive approach of the Biden administration coupled with continued pressure policies against Iran have so far prevented a breakthrough.