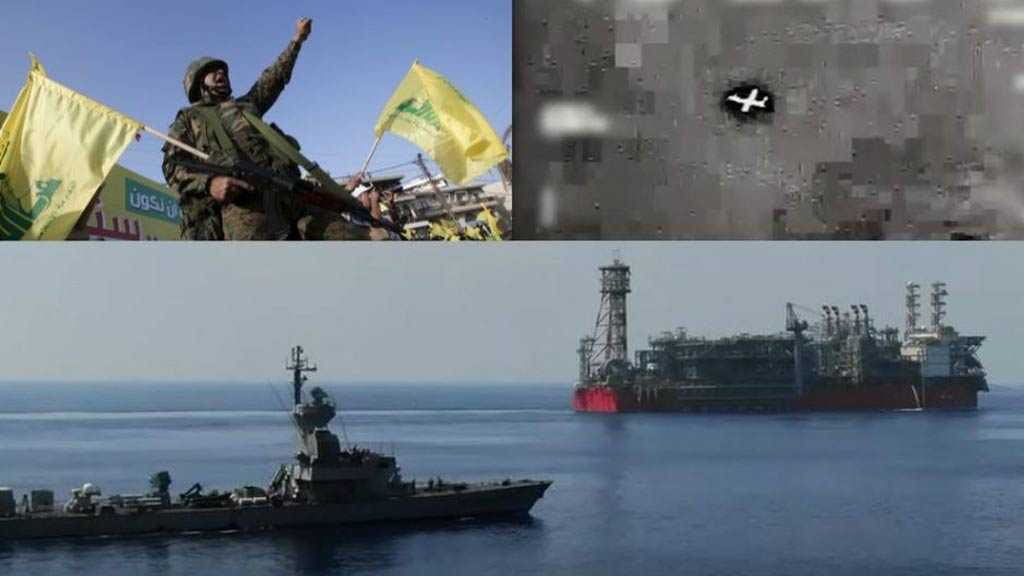 “'Israel' is deterred, and as long as it does not respond to Hezbollah’s launch of UAVS at the drilling rig in the Karish gas field, [Hezbollah Secretary General His eminence Sayyed Hassan] Nasrallah will continue to test the limits of 'Israel’s' restraint," Udi Dekel, a senior research fellow at the INSS and who filled various positions in the “Israeli” Occupation Forces [IOF], said.

Dekel went on to explain that “Sometimes it is necessary to play different, surprising cards in order to return to previous rules of the game.” He advises that the “Israeli” entity “should respond in the air campaign and attack the Hezbollah-operated air defense systems in Lebanon, even at the risk of escalation, which at the present time is likely to be limited.”

Furthermore, the INNA fellow explained that “A campaign is underway between ‘Israel’ and Hezbollah over air control in the skies” of both Lebanon and the northern occupied Palestine, as the group launched three unmanned aerial vehicles toward the “Israeli” drilling rig in the Karish gas field.

“The ‘Israeli’ entity should consider leveraging the current struggle in the aerial dimension and respond to Hezbollah's provocation by striking the Iranian air defense systems in Lebanon that were supplied to the organization,” Dekel added.

According to Dekel, by doing so, this would signal to both Hezbollah and ally Iran that “‘Israel’ is not deterred from conflict and will not continue its restraint in the face of Hezbollah’s expanding the boundaries and intensity of the campaign.”

On the afternoon of Saturday July 2, 2022, Hezbollah launched three unmanned aerial vehicles [UAVs] over the Mediterranean Sea toward the drilling rig in the Karish natural gas field.

Dekel explianes that the UAVs flew slowly at a low altitude in order to make it difficult for the “Israeli” entity’s early warning radar systems to locate and identify them, but the IOF detected and intercepted them using a fighter aircraft and Barak missiles launched from an “Israeli” navy ship. In the assessment of “Israeli” military sources, the UAVs were not carrying explosive materials, as no secondary explosions were identified during their interception.

Apparently, Hezbollah's purpose was to threaten the entity by demonstrating its ability to penetrate the area of the rig and even to threaten attacking it in the future, as well as to present aerial photographs as part of the organization's propaganda, the INSS fellow said.

In the report, Dekel mentions what he says are Hezbollah's goals:

It seems that the organization proceeded from an assumption of a low probability of an “Israeli” response at the present time, due to the weakness of the political system in the “Israeli” entity and its preference to maintain restraint and contain events with a potential for escalation, in particular in advance of the upcoming visit by US President Joe Biden to the occupied Palestinian territories and Saudi Arabia.

According to Dekel, Sayyed Nasrallah sees the use of UAVs and air defense systems as a kind of strategic counterweight to the entity’s regional air superiority. Furthermore, Hezbollah recently increased its use of reconnaissance UAVs and drones for propaganda purposes against “Israel”, almost on a daily basis, and for surveillance of the construction of the security barrier along the occupied Palestine-Lebanon border. Three months ago, a miniature UAV penetrated deep into “Israeli” airspace. Sayyed Nasrallah even boasted during the past year that "since we started operating our air defense system," Hezbollah has succeeded in reducing the entity’s freedom of aerial operation over Lebanon’s skies.

On April 5, 2022, these statements received confirmation from the outgoing commander of the “Israeli” Air Force [IAF], Maj. Gen. Amikam Norkin, who acknowledged in an on-camera interview that in the past year the entity’s freedom of operation in Lebanon was undermined.

The INSS fellow concluded the report by saying that, “Hezbollah is challenging ‘Israel’ and testing its red lines in order to demarcate its area of operation against it, but without deteriorating into a large-scale military conflict. Hezbollah's great success is in removing Lebanon from the arena of the ‘campaign between wars’ and in reducing the IAF’s freedom of operation in Lebanon's skies.”

He further added, “Hezbollah also challenges ‘Israel’ by penetrating its territory with UAVs [Hezbollah has hundreds of UAVs for intelligence gathering and attack] and in demonstrating a direct threat to strategic sites in ‘Israel’ and in its EEZ.”

Despite the IOF's success in detecting and intercepting the UAVs that Hezbollah launched, Dekel explains that the lack of an “Israeli” response to their penetration will necessarily lead to the next event, which could take place under circumstances that are less convenient for the “Israeli” entity.

“From the perspective of Iran and Hezbollah, there is a great temptation to strike an ‘Israeli’ drilling rig outside of its territorial waters based on the claim that it is maritime territory that is subject to a dispute between the countries,” he said.

Consequently, the “Israeli” entity would do well to consider leveraging the struggle underway in the aerial dimension to strike the Iranian air defense systems that were supplied to Hezbollah in Lebanon, according to Dekel.