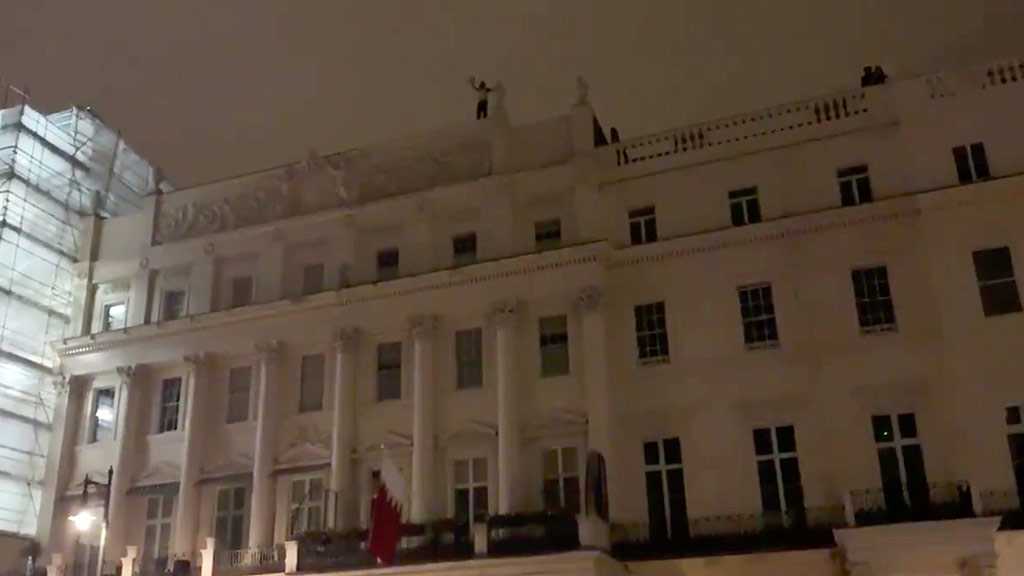 A Bahraini dissident has said he was beaten and threatened with being thrown from the roof of the country’s embassy in London last month by staff trying to halt his rooftop protest against the execution of two men in the Gulf nation.

Moosa Mohammed said he feared for his life in the struggle atop the five-story Belgravia building. He said it began when an embassy staffer pushed him, then hit him with a meter-long plank of wood while he was perched precariously on the edge.

“We have two people being executed in Bahrain and you will be the third,” the man with the makeshift weapon said, according to Mohammed. His accomplice later declared that nobody would help him because he was on “Bahraini land”.

Speaking publicly for the first time, the protester said that he believed he could have become “a second Jamal Khashoggi, in London,” comparing himself to the Saudi dissident murdered by the country’s agents in its embassy in Istanbul.

“I believed at the time he was trying to push me off the roof without anyone seeing that he had done this, so that it would look like I had fallen down by accident, or I had jumped off the roof,” Mohammed said, referring to the staffer he says had the weapon.

The incident is said to have taken place after Mohammed climbed to the top of the five-story embassy building at 10.30pm on 26 July via scaffolding in an attempt to get more coverage for a protest against the planned executions, which had been condemned by Amnesty International and other human rights groups.

It ended when British police and the fire brigade took the unusual step of forcing entry to the embassy. Mobile phone footage filmed by fellow Bahraini activists shows that police became concerned when they saw Mohammed sitting on the edge of the roof with another person nearby.

Officers can be clearly heard at street level threatening to “break down the door” if the embassy staff visible from the rooftop did not return to their building. Once the police officers entered the building, the incident ended and the human rights protester was arrested for aggravated trespass.

A statement from the Bahraini embassy on Wednesday praised staff for responding with “professionalism and courage” and said an “objective view of this incident would determine that peaceful and lawful protest does not take place on the roof of a diplomatic premises at 10.30pm”.

The statement added that the allegation that “embassy staff were trying to kill Mr Mohammed is completely unfounded and ridiculous” and accused him of “unlawfully trespassing” – and seeking to repeat a previous protest in 2012 when he climbed to the rooftop with a friend to protest against the jailing of a dissident in Bahrain.

Mohammed, however, said that the two embassy staffers held him down and tried to suffocate him with a wet T-shirt in a second phase of the struggle. “I couldn’t breathe. I felt like I was being suffocated and I was going to die,” he said.

The protester said he managed to wriggle free, and the two embassy staff are then alleged to have tried to tie his hands with a cable. One of the men, Mohammed said, then threatened to “tie him and throw him like a sheep down the stairs”.

Footage filmed by activists shows Mohammed clearly limping as he leaves the embassy escorted by police. There were bruise marks on his forearms and left leg, documented in a medical examination made at a London clinic two days later.

Mohammed, a longstanding campaigner for human rights in Bahrain, left the country and obtained asylum in the UK in 2006 after he had been repeatedly detained and harassed by the authorities in the authoritarian country.

The activist had decided to make the late-evening climb in the aftermath of an earlier, peaceful street-level protest, and had brought up a handwritten banner saying “I am risking my life to save 2 men about to be executed in the next few hours”. He shouted “down, down with Hamad”, referring to the country’s king.

Shortly after he climbed on to the embassy roof, staff arrived and the violent incident began, he said. When activists subsequently examined some of the mobile phone footage taken from the ground frame by frame, they appear to show a white object striking Mohammed. None of this, however, was spotted at the time.

Mohammed was released on police bail shortly after the incident. With the help of fellow activists and the law firm Bindmans, he is preparing to make an official complaint to the Met police and ask them to investigate an alleged assault by embassy staff.

Despite the protests, Bahrain went ahead with the executions.

Sayed Ahmed Alwadei, the director of advocacy at the Bahrain Institute for Rights & Democracy, who is helping represent Mohammed, said: “The UK government has spent millions of pounds of taxpayer money providing training to Bahrain’s violent police force. However, the oppression in Bahrain is only getting worse, with more violence and more executions. It is time for the UK government to end its complicity.”