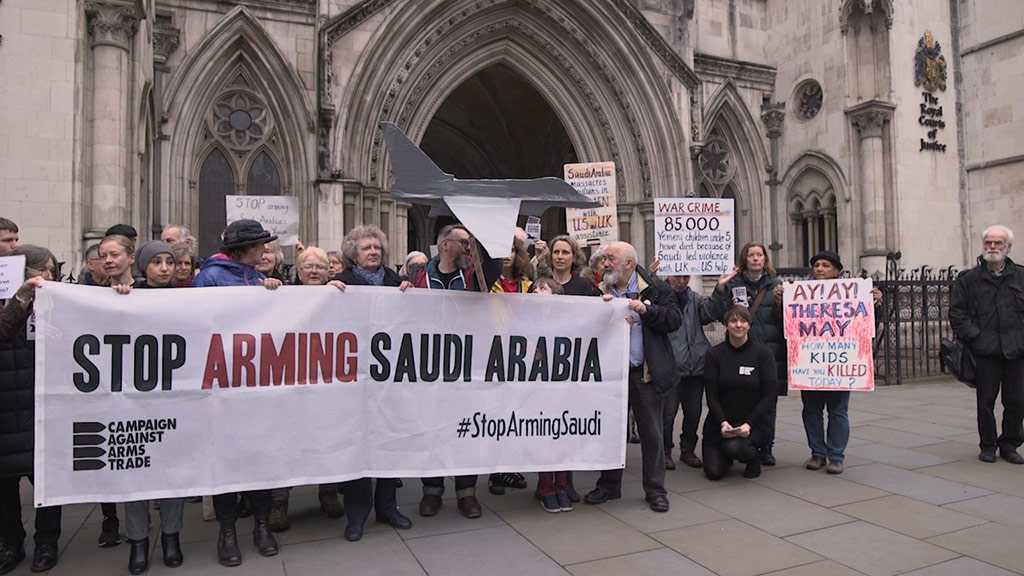 By Andrew Smith, The Guardian

For four years, the people of Yemen have endured a Saudi Arabian-led bombing campaign. Tens of thousands of people have been killed in the bombardment, with many more injured or displaced. The assault has created the worst humanitarian crisis in the world, with more than 50,000 children dying of preventable causes. A recent UN report warned that if things continue as they are then by the end of this year 250,000 people will have died as a result of the war.

This is a war that has been armed and supported every step of the way by the UK government, which has licensed over £5bn of military aircraft and bomb sales to Saudi Arabia since the war began. In a damning court of appeal verdict this morning, which followed a case brought by Campaign Against Arms Trade, the master of the rolls, Sir Terence Etherton, Lord Justice Irwin and Lord Justice Singh concluded that the export licensing decisions were “irrational and therefore unlawful”.

Successive British governments have been far more interested in arms export promotion and industry profits than in the rights and lives of Yemeni people. No matter how desperate and appalling the situation has become, the daily atrocities have done nothing to stop the drive for ever-greater arms sales.

On the fourth anniversary of the war, the foreign secretary, and Tory leadership hopeful, Jeremy Hunt, claimed it would be “morally bankrupt” to stop selling arms to the Saudi regime. That same day, Saudi-led forces bombed a hospital killing eight people. Hunt’s wording was particularly crass, but he was following the same disgraceful policies as his predecessor, and Tory rival, Boris Johnson, who in 2016 signed off on new bomb sales only two days after Saudi forces destroyed a food factory, killing 12 people.

The assault on the factory was not an isolated event. Since the war began, weddings, funerals and school bus trips have all been turned into massacres. Schools, hospitals, homes and even a refugee camp have been bombed. The EU and national arms export licensing criteria, which govern UK arms exports, are very clear in saying that if there is a “clear risk” that a weapon “might” be used in a serious breach of international humanitarian law [IHL] then an arms sale should not go ahead. Despite repeated reports from reputable sources that Saudi-led forces have been responsible for consistent and serious IHL breaches, the government continued to offer its uncritical political and military support for the war.

Many of the killings have been painstakingly documented by organizations such as Mwatana for Human Rights, a Yemeni organization that this year published an exceptionally detailed report that linked UK-made bombs to specific attacks on civilian targets. The evidence of war crimes has been overwhelming, but the government has refused to listen.

This morning’s result is unprecedented, and will have international repercussions, but it is a case that should never have needed to be brought. It should not take a legal case brought by campaigners to force the government to follow its own rules. What must happen now is an immediate revocation of all arms sales to Saudi-led forces for use in Yemen, and an end to UK support for the war in Yemen. The human cost of this war is abhorrent, and it has been made immeasurably worse by decisions made by the UK government. Saudi-led forces have carried out the bombing, but it wouldn’t have been possible without the complicity and support of arms-dealing governments such as Britain’s.

This case proves that the government’s priority is arms export promotion, not arms export control. How can a government violate its own laws and arm one of the most brutal dictatorships in the world while it inflicts a catastrophic humanitarian crisis on another state? There has always been a moral imperative to end arms sales to Saudi Arabia, now there is a legal imperative as well. The court has done its job, now it’s time for the government to do the same.