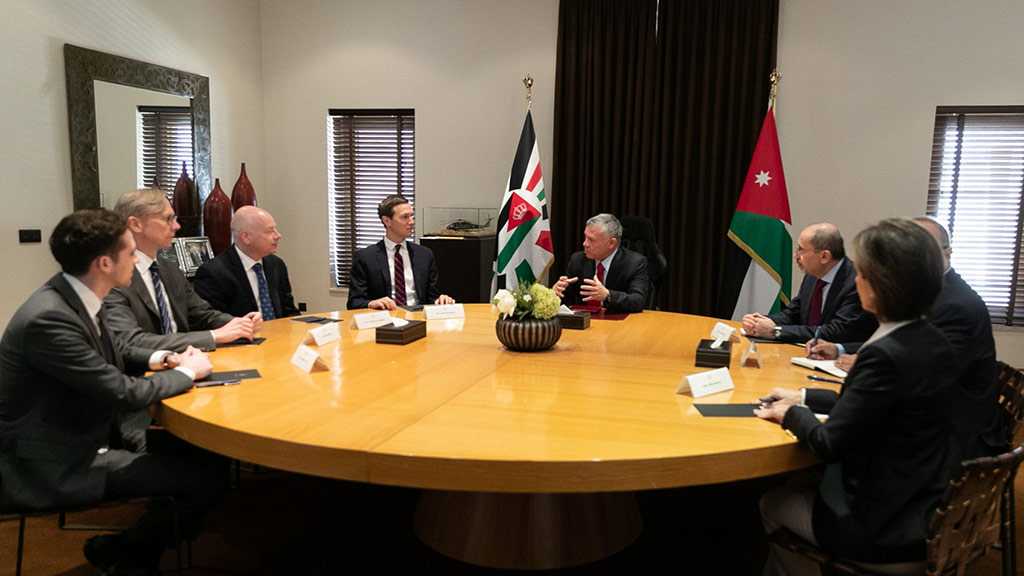 Jordan’s King Abdullah II has called for the formation of an independent Palestinian state along the 1967 boundaries with East al-Quds [Jerusalem] as its capital, in what appears to be at odds with Washington’s upcoming proposal on the “Israeli”-Palestinian conflict.

He made the remarks in a meeting with a US delegation headed by US President Donald Trump’s son-in-law and senior adviser Jared Kushner, along with Middle East Envoy Jason Greenblatt, in Amman on Wednesday.

King Abdullah II, who acts as the custodian of Islamic holy sites in al-Quds, expressed his commitment to the so-called two-state solution.

The Jordan king had “stressed the need to step up all efforts to achieve comprehensive and lasting peace on the basis of the two-state solution, guaranteeing the establishment of an independent Palestinian state on the 4 June 1967 lines, with East Jerusalem [al-Quds] as its capital ... in accordance with international law and relevant UN resolutions,” the Royal Hashemite Court said in a statement.

Greenblatt also tweeted that he had a “constructive meeting” with King Abdullah II that included “a good conversation about regional dynamics.”

The US delegation is meeting with top officials in Morocco, Jordan and the "Israeli" entity this week before it unveils the economic portion of the so-called “deal of the century” during a conference in Manama, Bahrain, on June 25-26.

On Tuesday, Kushner and Greenblatt held talks with Morocco’s King Mohammed VI on the Manama forum, which has been boycotted by all Palestinian factions.

The Palestinians have also rejected the US Middle East initiative as “the slap of the century” because it is said to hugely favor the "Israeli" entity.

On Tuesday evening, Jordanian activists held a protest near the heavily-fortified American embassy in Amman to denounce Kushner’s visit and Trump's plan on the "Israeli"-Palestinian conflict.

The demonstrators chanted slogans such as “The deal of the century will not pass,” and “Down with the US.”

They also held placards reading, “No to the deal of the century,” and “Go back home Kushner.”

Addressing the crowd, Abdul Hamid Thunaibat, leader of the Jordan’s Muslim Brotherhood, called on the government to adopt a clear position regarding its participation in the Bahrain conference.

Saudi Arabia and the UAE have said they will send delegations to the event and the “Israeli” entity’s so-called Finance Minister Moshe Kahlon has said he will also intend to attend.

The so-called Middle East peace process was dealt a major blow in December 2017, when Trump recognized al-Quds as the so-called “capital” of the “Israeli” entity. He also moved the American embassy from Tel Aviv to the “Israeli”-occupied city in May 2018.

Angered by Trump’s contentious move, Palestinian Authority President Mahmoud Abbas said Palestine would no longer recognize the US as a mediator in the decades-long conflict with the entity.