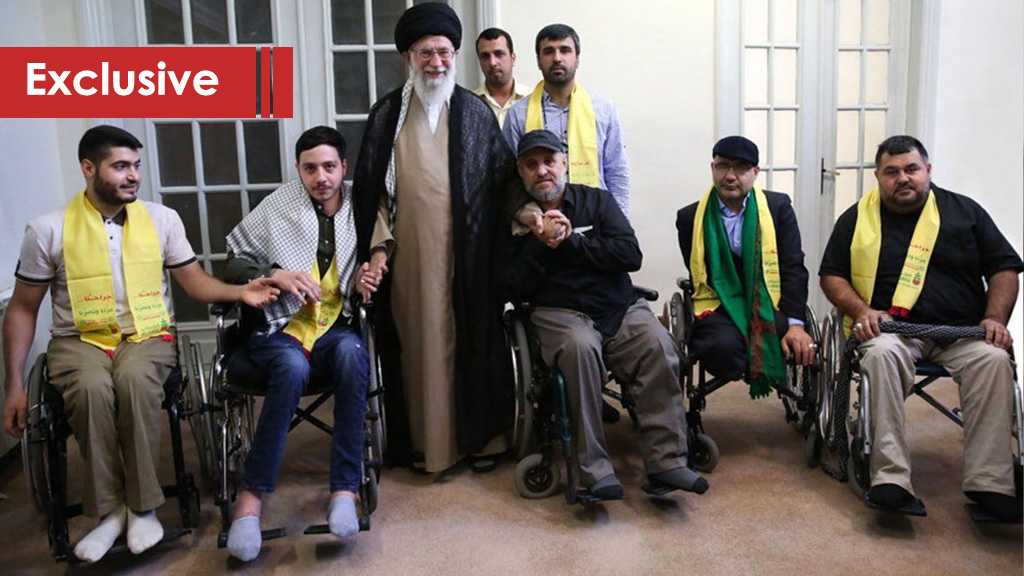 This is the story that goes way back in time. It is deeply rooted in the heart of humanity and what defines it. Not 10, not 100, nor 1000 years. It goes back farther.

It is a historical narrative about a never-ending faith. It is the most definitive concept of sacrifice, persistence and the continuation of Jihad from the time of Karbala of [Imam] al-Hussein (PBUH) and his son al-Abbas (PBUH). The wounds gave rise to the school of resistance. This permanent resistance continues to flourish because of the sacrifices it made, its martyrs and its wounded [resistance fighters]. It also thrives because of its icons and mujahideen. Inspired by that eternal story, Hezbollah intended to mark the day of its wounded on the birthday of Abi al-Fadl al-Abbas (PBUH), which falls on the 4th of the holy month of Shaaban. It is a rendezvous with an icon and the lesson that summarizes the journey of the supreme Jihad, starting from the situation, to the confrontation, to the sacrifice, steadfastness, and continuing the path despite the severity of the wounds.

Often a journalist or a writer lacks the words to describe them. What can be written about young men, fairer and more youthful than flowers? Their injuries have changed their physical abilities, paralyzed them or took away their ability to lead normal lives, yet they are in a state of complete acceptance. “We gave what Allah made possible for us to give. This is the least we can do,” Hadi Krayyem, a wounded fighter of the holy defense, tells Al-Ahed News Website.

Words do not do them justice when describing them. They amaze everyone who meets them or looks at them. Astonishing are the wounded resistance fighters in all the stages of Jihad. They fought and won it all. Hezbollah Secretary General Sayyed Hassan Nasrallah said that they expressed a high level of faith, patience and foresight. They are astonishing in their silence, steadfastness and their faith to continue their path despite the severity of their wounds. Being hit by a bullet or shell fragments does not hinder them from continuing the path. They are astonishing when they say: "What does not affect our faith is not considered an injury."

Wounded fighter Hadi restates it to our website tenderly, "the real injury is in the heart. As long as the heart is heading toward Jihad and faith, there is no fear of bullets." Hadi, who fought in the great battles of Aleppo, presents himself as a role model. He has not completed his university studies. During the battles, he endured a head injury causing facial hemiplegia. Hadi tells al-Ahed that he went back to school after only three months to continue his Master’s in Human Resources and work as "an educational counselor and an assistant in identifying the educational tracks of graduates" at a social institution. "It is another kind of Jihad," he says. "It is continuity of life, but in a field other than the battlefield."

A Continuing Testimony: The Journey of the Wounds

Wounded fighter Shubair al-Hussein Zaiter likes to interpret Sayyed Nasrallah’s words. He is especially fond of the line, "your wounds are a testimony to you in this world and the Hereafter."

Shubair tells al-Ahed, "These wounds are the label that defines the Mujahid category. Through them they reach the highest levels according to Allah." Then, he goes on to read the words of the Sayyed.

"These wounded [fighters] have become a significant driving and motivating force for the resistance and the resistance fighters. They have also become the model that summarizes the concept of resistance, dignity, patience, steadfastness and continuing the path of Jihad the same way al-Abbas did. Thus, [al-Abbas] becoming the teacher and a role model.”

The young man describes this amazing scene of Jihad. When he talks about it, you feel as if he is living it with all its dimensions and meanings, moment by moment. It is as if he was waiting for it, pledging loyalty like Abu al-Fadl (PBUH) did, in the name of Allah and in the defense of his Prophet’s religion. "These wounds are a great journey towards the pleasing of God," he concludes.

"The parts that fell from our bodies are a sacrifice for the land and the homeland and a defense of dignity and honor. They are a bond of faith and Jihad to continue the path of victory," says Rayya, who was exhausted by his wounds.

However, he has not lost the spirit of resistance and sacrifice and has not changed the concept of precious sacrifice in return for precious victory.

Rayya sees that "a journey of determination and persistence began with my [his] wounds. I have made them into a medal on my chest as a resistance fighter, who follows Ahlulbayt (PBUT) and learns from the school of al-Abbas (PBUH), does and faces the difficulties to live an honorable life."

These wounds brightly flaunting as martyrdom does, this path of Jihad for the cause of faith and the resistance fighters’ pain gave rise to a renewed soul, a continuous impulse and a great drive. They have also bore a good fruit similar to that of the martyrs, in the same land of Jihad and on the same path of al-Abbas (PBUH).