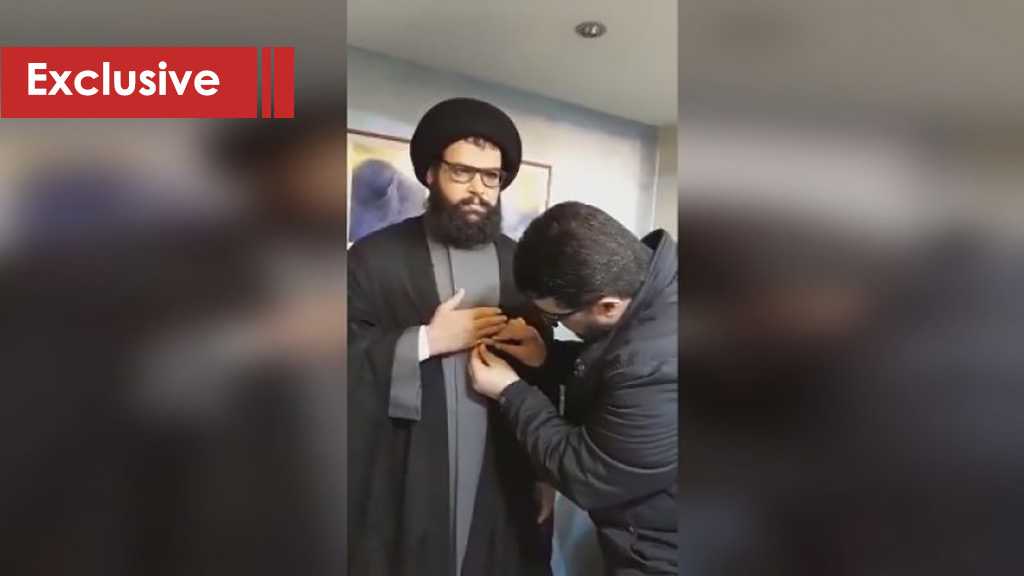 South Lebanon – Sayyed Abbas al-Moussawi has been martyred for more than a quarter of a century. Time has witnessed his main will. His admirers continue to look at every picture of him as if satisfying their longing for his features, his voice, his Husseini turban and his footstep through every jihad site. It is perhaps one of the cases of infatuation for a leader that is a role model and the closest loved one to oneself. He is the leader of the martyrs of the Islamic Resistance, His Eminence, Sayyed Abbas al-Moussawi. He is present here among us and in the jihad site that loves him the most.

It is an artistic sophisticated initiative launched individually as part of a joint Lebanese-Iranian art collaboration. Sayyed Abbas al-Moussawi is embodied in the most accurate details through a realistic drawing and personification. A special paste material was used in sculpting it.

Ayman Jaber, the designer and technical supervisor of the project, explains to al-Ahed news how the idea began to be individually discussed by someone who admired Sayyed Abbas al-Moussawi, his personality and his jihad. Thus, it was suggested to sculpt a lifelike model of Sayyed’s features through a fully artistic and logistical project.

Jaber adds that the donor studied the project and approved it. Then came the stage of maturation of the artistic vision of the model by invoking archive images in cooperation with Sayyed’s son, Sayyed Yasser.

"The work was carried out in cooperation with a specialized Iranian technical company (Honar and Harir) and the Graphia art foundation," Mr. Jaber says, adding that it took more than two months to complete the details of the model. The facial features took the longest.

The accuracy up close astonishes the viewer. The designers and sculptors paid attention to the smallest detail, from the bright eyes, hands, the mouth and the body to the attractive depiction for every admirer longing to be close to Sayyed al-Moussawi and look at him.

"We could not find a better place to house the model than the Mleeta Landmark,” Mr. Jabber asserts. “As a jihadi landmark, it loved Sayyed. And Sayyed loved it too. They knew each other from the smell of the dirt and the scent of the black cloak."

I almost embraced it

Sayyed al-Moussawi was never away from his son Yasser. He was in his daily life, even in his prominent features. But this time, his presence might be even closer. He is really Sayyed Abbas standing before us, with his body, look and smile. It is the Sayyed.

"There - in Mleeta - the admirer will feel the presence of Sayyed Abbas al-Moussawi, in form and picture, through the lifelike model," Sayyed Yasser al- Moussawi, Sayyed Abbas al-Moussawi’s kin tells al-Ahed news. Then he recalls and says in a voice full of yearning, “I almost embraced him. How could I not as I long for him. The model, the accuracy of its design, details and the quality of the resemblance – brings me back to the past.”

Yasser conveys to our site how it was decided to "place the model in the Mleeta Resistance Landmark due to its jihadi symbolism that is compatible with Sayyed Abbas’ stature as a friend of the resistance fighters."

He then reveals that Hezbollah’s Secretary General Sayyed Hassan Nasrallah supported the idea of placing it in Mleeta as the most appropriate place for the particularity of the site, the memory and personality as well as for the unique relationship that Sayyed al-Moussawi had with this jihad spot of resistance.

“Sayyed encouraged this work of every household that misses and yearns for him to put his picture up,” Yasser adds.

He concludes by saying that "the purpose of this work is for the preservation of the leaders and figures. The same way Sayyed Abbas has entrusted us with the resistance and the blood of the martyrs, we must remain on the path that he set out for us."

Therefore, it is an advanced spiritual-artistic gesture that conjures the souls that have not left the resistance for one moment. It brings the resistance back to its roots, motivates it to follow the main will, and follow the path of the martyrs and their leader.