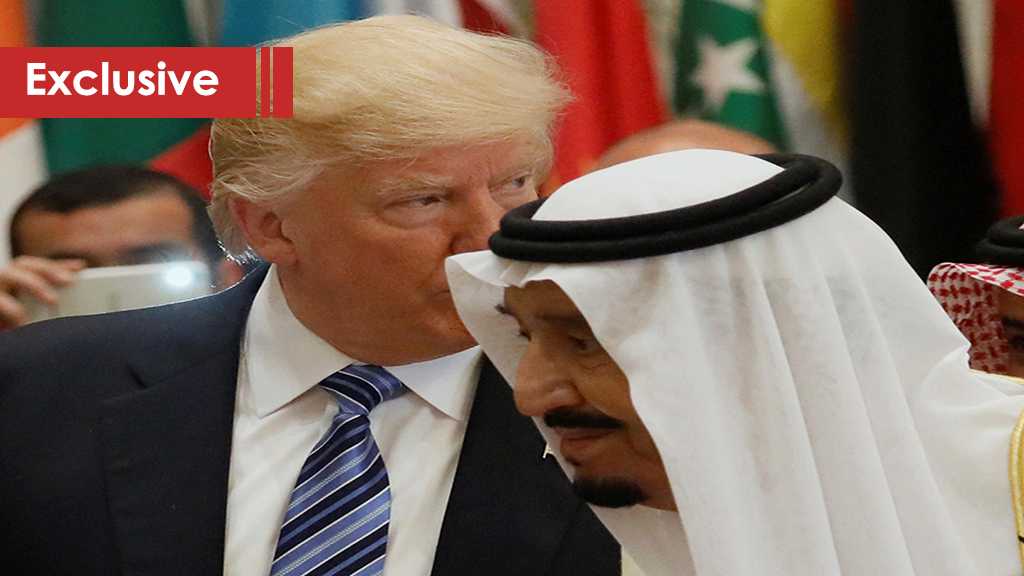 The excessively controversial president of the United States, Donald Trump, declared that without the protection of his country’s army, Saudi Arabia’s king may not last more than two weeks. Why wouldn’t King Salman be able to reign over his country without the US?

The list of enemies that the Saudi government has been publicizing is short. It has Iran as the major source of evil, then Syria and Qatar as secondary foes. The Lebanese resistance movement, Hezbollah, is also given great importance by the Saudis. And, finally, Yemen.

None of the above have actually ever initiated military offensives in their history. The Islamic Republic has been on the defensive for nearly four decades; the same with Syria, Yemen, and Hezbollah. They all fought in response to aggression; they have never been the aggressors.

As for Qatar, the only sin committed by the royalty of Al Thani was peaceful defiance in the face of a psychopath crown prince demanding blind allegiance.

So, regardless of what the Saudi run multimillion-dollar media campaign would like people to think, the Arab kingdom does not, in reality, have foreign enemies. Which brings us to the American president’s comments again. What is he protecting and why the need for protection?

At this point, an undisclosed and unadvertised list of prospective enemies which begins with the Hashemite family may be drawn up. Although not actively challenging the Saud family, the fact remains that the Hashemites are the rightful lords of the land and their tribe leader should be the one holding the title of Khadem Al Haramayn Al Shareefayn (Custodian of the two holy cities – Mecca and Al Madina.)

The British Empire’s long-term plan for the breaking of the region and the Arab world did not foresee a moderate Sunni leader as being a proper tool. They needed a fanatic Wahhabi whose core beliefs may not contain sympathy towards others. It had to be someone who couldn’t care less for Islam, the Arab world, and Palestine. Hence, the Hashemites’ seclusion in Jordan.

Next is the Sunni world. As much as the Saud family would like for people to think that they represent the global Sunni population, they don’t. Wahhabis do carry the banner of Islam but when one studies their teachings closely, it becomes apparent that they are as far away from Islam as fire is from water. They are actually very close, dogmatically, to Zionists. The practice of regarding others are lower life forms who deserve to be terminated is common between the two. Also, the aim of destroying Muslim landmarks like the house of the Prophet Mohamed [PBUH] goes in parallel with the Zionist plans of tearing down the Al Aqsa mosque. Both thrive on a false claim of superiority that gives them the self-given right to commit one holocaust after another.

Many Sunnis not only understand the difference between their own moderate beliefs and those of Wahhabis but also understand that Wahhabism is not Islam.

A third enemy of the king is the educated portion of the Saudi people. They are increasing in number on daily basis and their education makes them highly critical of the decadent-style government they have. They want change.

The fourth, also a domestic one, represents what could be the most imminent danger to King Salman. Angry Saudi tribe sheikhs will not hesitate to rally against him as soon as an opportunity is at hand. Even within his own tribe, there are princes with intentions of staging an internal coup. King Salman’s choice of a crown prince led to the persecution of almost all in the realm – Mohammed Bin Salman has stepped on everybody’s toes in a most horrible manner.

This is why Trump’s statement was specific in pinpointing whom the American military is protecting. Not the country; rather, the dictator. US soldiers are acting as bodyguards for the king and it is costing the Saudi people more in terms of shame than money.

Indeed, any other government with a shred of dignity would close the US embassy, sever diplomatic ties, and possibly expel all US citizens unless they receive an instant apology. Not in Saudi Arabia though. Their diplomacy is too preoccupied with antagonizing Canada and interfering in the domestic politics of sovereign neighboring countries. They have no time for protecting their national pride.

What makes everything even worse is the fact that Trump’s statement and choice of words have placed the US military in the category of a mercenary force for hire by dictators.

The next time someone questions the Islamic Republic’s candid position against the practices of US administrations, they should just know that not this or any other Trump is able to ever treat Iran the way Saudi Arabia is treated. The Iranians rebelled against a Shah who gave free rein to Americans to do as they pleased in his country. During the 70s, the Iranian police stood powerless against drunk drivers who wreaked havoc in the streets of Tehran because of diplomatic immunity. Women were scared to walk alone or after dusk because those who enjoyed diplomatic immunity did as they pleased, and they were in the hundreds.

The Iranian president practices his democratic right to speak about Palestine without receiving an angry call from a US ambassador threatening to have him usurped. That is because the Iranians owe nothing to no one and base all their bilateral ties on mutual respect. King Salman can learn a great deal from Mr. Rouhani.