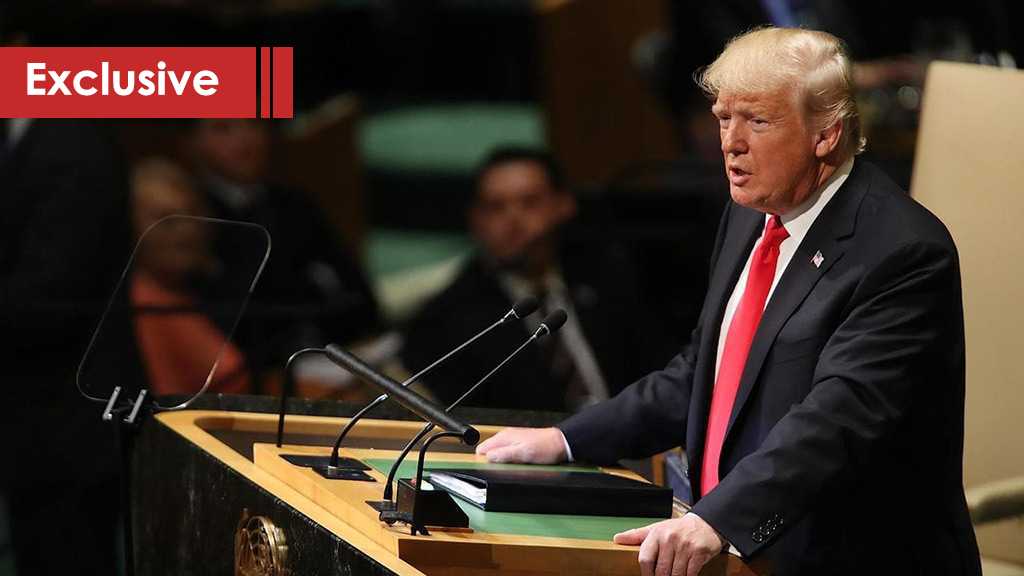 The world and media are still busy with the Trump speech at the UN Security Council, which got a ripple of murmurs and giggles before it exploded into a wave of laughter when he made his claims on achieving what no other administration has achieved throughout US history.

He did not expect the chuckles, as he clearly stated “didn’t expect the reaction, but that’s okay”. Then he tried to improvise and turn it into “they laughed with me rather than at me” while speaking to the media afterwards. The reaction in the echoing General Assembly hall came in presence of more than a hundred and thirty heads of state and dozens of other delegations.

During the presidential campaign, Trump often repeated the phrase "The world is laughing at us.” However, during the UN around 35-minute speech, the world was laughing at Trump.

Of course, on the sidelines of the Assembly, the president used his favorite term of “fake news” that has been popularized, to justify the laughter of the audience by saying the speech was supposed to be received in a cheerful manner and was taken out of context, calling the media’s coverage “fake news.”

Trump’s speech requires long pages of critique however a few highlights does the work. The US President was audacious enough to say the following “I honor the right of every nation in this room to pursue its own customs, beliefs, and traditions. The United States will not tell you how to live or work or worship.”

The Trump administration not only dictates everyone on this planet on how to live and what to do, it also disrespects its neighbors such as Latin America, and extends its disrespect and supremacy overseas and interferes in the affairs of others. It also disrespects American people living inside the borders of the US because of their descent or origin.

The US president is at odds with Hispanics, Muslims, African Americans and anyone but white supremacist inside and outside America. Around April, US relations with Latin America plummeted as President Trump traded spurs with his Mexican counterpart and canceled attendance at a regional summit.

According to Sen. Bob Menendez (D-N.J.), the ranking member of the Senate Foreign Relations Committee, “Throughout Latin America, we were at a high water mark in every public opinion poll, [but] perception of America has dramatically dropped. And that is uniquely due to President Trump.”

Washington has been involved in the war in Syria alongside Saudi Arabia, the UAE and other countries in support of Wahhabi terrorist groups such as ISIS or Daesh. It has been rocketing all sorts of attacks against Iran, claiming to support the Iranian people while crippling them economically in first place. Iran has been a target for Trump before he even made it to office, and no reason seems to be present except for Iran being different and independent. He ruined an internationally accepted deal and showered Iran with avalanches of accusations and criticism at the time Iran had been abiding by its side of the nuclear deal and has never started any aggressive act towards another state actor. Also, before arriving to the love letters part, Trump had threatened North Korea’s Kim Jung Un and calling him a monster over nuclear tensions.

Cynically, if Trump justifies his actions towards North Korea as out of national security concern, he should have destroyed his own nuclear warheads and “bigger button”.

In a tweet back in January, Trump wrote "North Korean Leader Kim Jong Un stated that the “Nuclear Button is on his desk at all times. Will someone from his depleted and food starved regime please inform him that I too have a Nuclear Button, but it is a much bigger & more powerful one than his, and my Button works!"

Trump also falsely claimed in his speech “Each of us here today is the emissary of a distinct culture, a rich history, and a people bound together by ties of memory, tradition, and the values that make our homelands like nowhere else on Earth.”

But then he called on the more than a hundred and ninety UN nations “to join us in calling for the restoration of democracy in Venezuela” and to what he allegedly described as “support Iran’s people as they struggle to reclaim their religious and righteous destiny.”

Trump’s moments at the speech reinforced his administration’s isolation among allies and foes equally, as his nationalistic policies have created rifts with partners and cast doubt about the credibility of America and the reliability of its commitments around the world.

Of course among all this, Trump focused on his “America first” and “no globalism” ideas, which was reflected in the words of US officials a couple of days before Trump’s speech at the UN. Now it remains a question on whether this “America first” policy will isolate the US especially after the European Union and China statements on Iran one day earlier to his speech.

Some observers have pointed out that Trump's words are only meant to appease his domestic support base and that essentially, US foreign policy under Trump hasn't changed much.

"There have been studies that show that substantially when it comes to Asia, not much has really actually changed. In terms of the number of US forces in Asia, its foreign policy makers coming for visits, a lot of the messages have not changed," said Dr. Hoo Tiang Boon, an expert on US-China relations from the S Rajaratnam School of International Studies (RSIS).

"Even though they are pushing the America First policy, they still maintain their alliance and relationship. But in terms of the way of communicating, that is certainly very different. And I think a lot of it is about domestic politics."

One day before Trump delivered his speech, Europe sounded its willingness to cooperate with Iran and was devising ways around US, Chinese state media was whipping up popular sentiment to fight the trade war Trump started, and the US administration was about to miss the deadline for a trade agreement with Canada and Mexico.

Trump’s game at the UN Assembly hall was not very different from his game during the electoral campaign; it is all about humiliation and name-calling and ongoing lies (according to the Washington Post’s Fact Checker list,  since assuming office and before the start of summer, President Donald Trump has made 3,251 false or misleading claims).