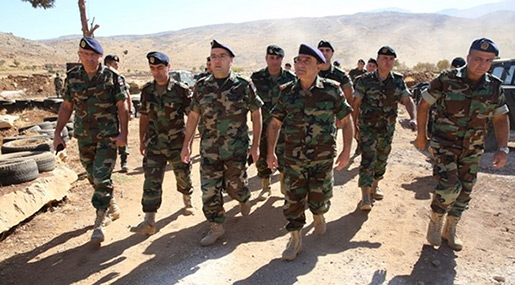 Top security and military officials Thursday denounced ongoing "Israeli" "massacres" as Lebanon is set to commemorate Resistance and Liberation Day, which marks the withdrawal of "Israeli" occupying forces from south Lebanon in 2000.

"The era in which the south was an open arena for ‘Israeli' aggression [has passed], allowing [the south] to become an oasis of safety and stability thanks to the will of its people and the readiness of its Army to defend it," Army chief of staff Maj. Gen. Hatem Malak said in an official statement Wednesday, a day ahead of the 18th anniversary of the "Israeli" withdrawal.

Malak criticized "Israeli" forces, "who continue to commit brutal massacres and crimes against the Palestinian people." "Israeli" armed forces shot and martyred at least 60 Palestinian protesters in a single day in Gaza earlier this month, bloodshed that drew worldwide scorn.

"Combatting terrorism in the face of ‘Israel' will remain a priority of the Directorate General of Lebanese General Security," Ibrahim said, also praising security forces for their handling of parliamentary elections earlier this month.