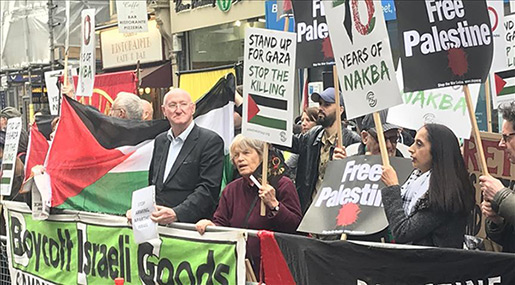 Hundreds of people rallied in front of the "Israeli" entity's embassy in London to protest the 70th anniversary of the entity's establishment - an event Arabs refer to as "The Nakba" or "The Catastrophe".

Some of the placards held by the protesters read "Stand up For Gaza, Stop the Killing" and "Nakba 70, We Are Returning".

Jewish immigration to occupied Palestine rose considerably during the British mandate period, which lasted from 1922 to 14 May 1948.

Ultimately, some 700,000 Palestinians fled their homes - or were forcibly expelled by invading Jewish forces - while hundreds of Palestinian villages and cities were razed to the ground.

The Palestinian diaspora has since become one of the largest in the world.

Until this day, Palestinian refugees remain scattered across Jordan, Lebanon, Syria and other countries, while many have settled in refugee camps in the Palestinian West Bank and Gaza Strip.

Last December, US President Donald Trump sparked an international outcry when he unilaterally recognized al-Quds [Jerusalem] as the "Israeli" entity's so-called capital and vowed to relocate Washington's embassy to the flashpoint city - a move scheduled for next Monday (14 May).

Tension has mounted on the Gaza Strip's eastern border with the entity since 30 March, when Palestinians began holding open-ended demonstrations to demand the "right of return" to their homes in historical Palestine from which they were driven in 1948.

Since the rallies began some six weeks ago, at least 48 Palestinian demonstrators have been martyred and hundreds more - possibly thousands - injured.

The Nakba will be protested with various activities - which will take place in the occupied West Bank, the besieged Gaza Strip and in Arab villages inside the entity - including seminars, marches and protests, according to organizers from the National Committee for the Commemoration of the Nakba.

May 15 will also be a day of "confrontation" with the "Israeli" army "in all border areas," organizers said.