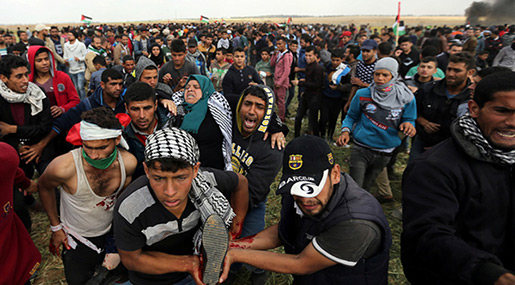 Organizers of this week's protest - themed "rebellious youth" in honor of those martyred during past demonstration - promise to keep the march nonviolent.

31 Palestinians were reported hurt Friday by "Israeli" fire as the Great March of Return along the "Israel"-Gaza border began for the fifth week in a row.

The committee organizing the protests said this week's march will be dedicated to "rebellious youth" to honor the thousands of young people who have come to protest every week at the area along the border fence.

The organizers said that this week, too, the marches are supposed to remain a nonviolent mass protest.

The protests will continue even after May 15, the day the Palestinians mark the Nakba (Catastrophe) - the founding of the "Israeli" entity - said Ismail Haniyeh, the head of the Hamas political bureau, on Wednesday. "The Palestinian people will demonstrate throughout the month of Ramadan to deal with the many challenges facing us, and first of all the peace plan promoted by US President Donald Trump, called the ‘Deal of the Century,'" said Haniyeh.

"We will turn this deal into a resounding slap in the face for the administration in Washington and anyone who weaves conspiracies against the Palestinian people," added Haniyeh.

Forty-two Palestinians had been martyred and 5,511 were wounded in the mass protests since March 30, the United Nations Office for the Coordination of Humanitarian Affairs reported on Tuesday.

On Friday, the UN Human Rights chief Zeid Raad al-Hussein said that the "Israeli" entity must address the use of excessive force in Gaza, and that the loss of life is "deplorable," and that "the number of injuries is staggering."

Thousands are expected to turn out for the protests this week due to growing anger, particularly after the funeral of Fadi al-Batsh in the Jabalya refugee camp in the central Gaza Strip on Thursday. Thousands attended the funeral of al-Batsh, a Palestinian engineer who was assassinated in Malaysia and whose death was attributed by foreign media outlets to the Mossad.