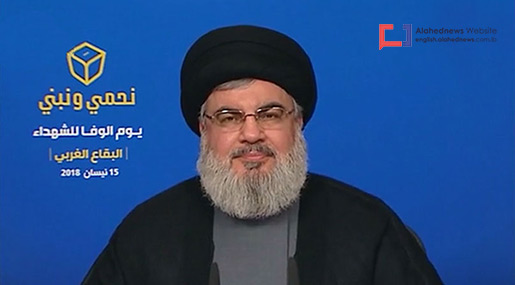 During an electoral rally held in the Western Lebanese Bekaa, Sayyed Nasrallah confirmed that the US aggression on Syria sought to raise the morale of the armed groups, but the result was their disappointment.

He further highlighted that the US-led aggression did not achieve its goals and that it only made the axis of the Resistance more confident.

He also cautioned that the US strikes will complicate the political solution to the conflict.
His Eminence also downplayed the roles of Britain and France as followers of the main player i.e. the US in the aggression against Syria.

"France has admitted that its sources in accusing the Syrian state are based on social communication sites and the images spread on it," he stressed.

On the goals of the aggression, the Resistance Leader elaborated that the US with Britain and France rushed to launch the Saturday attack because they knew their claims of a so-called Syrian chemical attack in Douma were mere fabrications.

"They sought to finish off the scenario before the international chemical weapons experts could reach the site on Sunday," he stated, pointing out that another aim of the US led strikes is terrorizing and breaking the will of the people, the Syrian army and its allies. "However, this did not happen," Sayyed Nasrallah assured.

Meanwhile, His Eminence underscored that "many countries and terrorist organizations draw hopes on these strikes ."

"Some Gulf countries have worked and offered millions of dollars to strike Syria and its institutions," he added, noting that "regional countries have bet that the US aggression will destroy the Syrian air force, the Revolutionary Guards and allies' positions."

In addition, Sayyed Nasrallah mentioned that "the Syrian air defenses managed to drop many of the American missiles before reaching their targets."

In this context, he quoted the "Israeli" as saying: "The American missiles were beautiful and smart but the with zero results."

"What happened on Saturday should increase our confidence in our strength, presence, ability and the enemy's limited options, despite its capabilities," Sayyed Nasrallah added, pointing out that "the limitation of the US aggression is a clear American recognition of the Resistance axis' strength and its ability to emerge victorious as it did before."

"The US aggression on Syria has failed to change the equation in favor of "Israel" or some regional countries," he said.

On the same level, Sayyed Nasrallah mentioned that "there is no chemical weapons in Syria."
However, he predicted that "the accusation will remain. We do not rule out new chemical plays and new aggressions with every victory."

"The US with its institutions, knows that any broad aggression against Syria can't end without consequences, but will blow the entire region," Hezbollah Secretary General went on to say.

He also stated that the US soldiers are aware of the fact any ground operation in Syria would not be an easy task to undertake; and this is why they are avoiding it.

On the internal level, Sayyed Nasrallah thanked the huge crowd participating in the electoral rally in Bekaa.

"The aim of this rally is to announce our support for the "Better Tomorrow" electoral list in Bekaa. We held this festival to express our love, loyalty and support to our friends and allies," he announced.

Meanwhile, His Eminence emphasized that "Hezbollah candidate is a candidate for both Hezbollah and Amal and vice versa."

"Candidate Muhammad Nasrallah is a candidate for both Hezbollah and Amal movement," he said.
Sayyed Nasrallah acknowledged that the people in Bekaa and Rashaya form an integral part of the Resistance.

"We rarely find a sector or axis that sacrificed its leaders as martyrs as the Western Bekaa people did," he said, pointing out that "the strong presence in the government and state institutions is the true guarantee for the Resistance and the golden equation."

Moreover, Hezbollah Secretary General underscored that the file of the Litani river and the safety of water should be a priority and a primary responsibility for the western Bekaa and Rashaya MPs."

"The Zionist enemy is more coward than to launch any ground attack on any of Rashaya and Hasbaya villages," His Eminence assured, noting that "the harmony between the national Lebanese army, the popular Resistance and the people embracing both the army and the Resistance is the biggest strategic response to any threat."

Sayyed Nasrallah wondered: "Is it in the interest of the Western Bekaa people to incite against the resistance, which is a guarantee for their dear and generous existence?"

"The interest of the people in Bekaa is to return to coexistence with their Syrian neighbors and this requires stopping the incitement against Syria," he said, emphasizing that "if there is someone who is still betting that Syria has fallen, then they are delusional."

To the Resistance people, Sayyed Nasrallah said: "We expect you to be fully present on the Election Day."