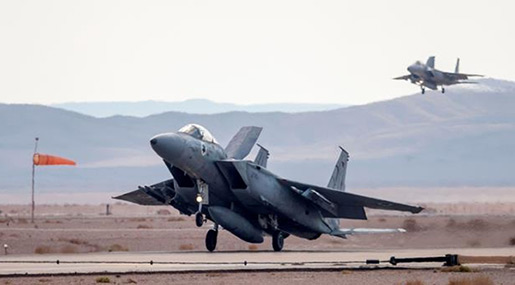 "Israel" faced international blowback on Tuesday over the bombardment of Syria's largest air base.

Lebanon announced it would complain to the United Nations about the "Israeli" intrusion into its airspace.

Russian Foreign Minister Sergei Lavrov described the strike as "a dangerous development" in the Syrian war, now in its eighth year, and the entity's ambassador to Russia, Gary Koren, was summoned to the Foreign Ministry in Moscow for a rebuke.

The bombing of the air base, known as T4, came the day after reports emerged from Syria of an alleged chemical weapon attack on civilians in Damascus' militant-occupied suburb of Douma.

In Damascus, Ali Akbar Velayati, the diplomatic advisor to Leader of the Islamic Revolution His Eminence Imam Sayyed Ali Khamenei, issued an open threat to "Israel" on Tuesday after the Iranian government said it had lost seven personnel in the strike.

Asked by the official Iranian news agency to address "crimes committed by the Zionists against the Syrian forces and defenders of the holy shrines in the Al Tifour Airport," an alternate name for the air base, Velayati said: "The crimes will not remain unanswered. Victory is near."

As is customary, "Israeli" officials refused to comment on the bombing. But on a visit to an emergency command center along the entity's northern border with Syria, War Minister Avigdor Lieberman alluded to "Israel's" concerns over Iran's entrenchment in Syria and its fear that President Trump may order the withdrawal of US troops from the country, as he has proposed.

The "Israeli" entity views Iran as its greatest enemy, and a nuclear-armed Iran as an existential threat.

"I don't know what happened there and who attacked," Lieberman said of the Syrian strike. "I know one thing with certainty: We will not allow the Iranians to establish themselves in Syria, whatever the price may be. We have no other choice."

Allowing Iran to remain in Syria, he said, was akin to "agreeing to the Iranians placing a noose around our necks. We will not allow it."

Eliot Higgins, the founder of the investigative reporting site Bellingcat, said that, in addition to a strictly military purpose, bombing T4 may serve as an "Israeli" signal to a wavering Trump that it is possible to respond militarily against Russia and Syria in the Syrian arena.

This, he says, is what drew Russian ire. "Russia clearly sees it as a threat," he said.

Trump has said he will make a "major decision" in the next day about how to react to the alleged chemical attack. The White House has not commented specifically about the "Israeli" airstrike.

Alex Grinberg, an expert in Tel Aviv on the Mideast, Russia and Iran at the Middle East Center for Reporting and Analysis, said the entity's alarm at the situation in Syria is roughly equivalent to its outrage over the nuclear deal President Obama signed with Iran, over strenuous objections from "Israeli" Prime Minister Benjamin Netanyahu.