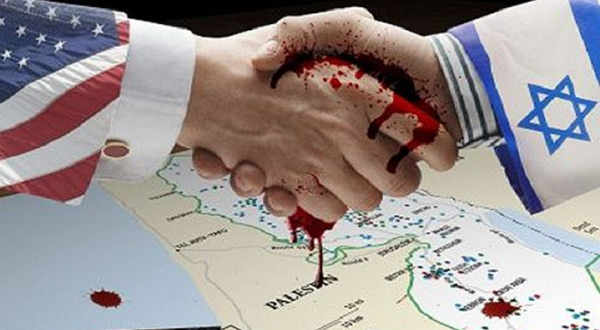 If you want to understand what the "special relationship" between "Israel" and the United States really means consider the fact that "Israeli" Army snipers shot dead seventeen unarmed and largely peaceful Gazan demonstrators on Good Friday without a squeak coming out of the White House or State Department. Some of the protesters were shot in the back while running away, while another 1,000 Palestinians were wounded, an estimated 750 by gunfire, the remainder injured by rubber bullets and tear gas. 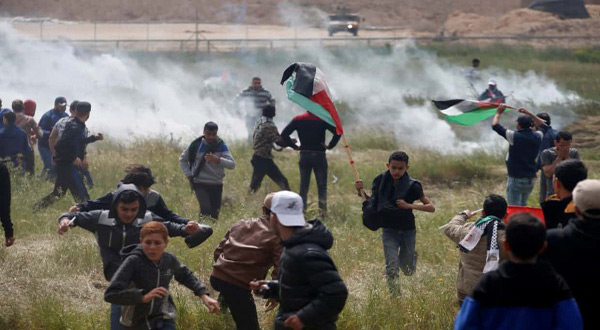 The offense committed by the Gazan protesters that has earned them a death sentence was coming too close to the Israeli containment fence that has turned the Gaza strip into the world's largest outdoor prison. President Donald Trump's chief Middle East negotiator David Greenblatt described the protest as "a hostile march on the "Israel"-Gaza border...inciting violence against Israel." And Nikki Haley at the UN has also used the US veto to block any independent inquiry into the violence, demonstrating once again that the White House team is little more than Israel's echo chamber. America's enabling of the brutal reality that is today's Israel makes it fully complicit in the war crimes carried out against the helpless and hapless Palestinian people.

So where was the outrage in the American media about the massacre of civilians? Characteristically, "Israel" portrays itself as somehow a victim and the US media, when it bothers to report about dead Palestinians at all, picks up on that line. The "Jewish State" is portrayed as always endangered and struggling to survive even though it is the nuclear armed regional superpower that is only threatened because of its own criminal behavior. And even when it commits what are indisputable war crimes like the use of lethal force against an unarmed civilian population, the Jewish Lobby and its media accomplices are quick to take up the victimhood refrain.

Last week, the "Israeli" government described the protests an "an organized terrorist operation" while Gazans are dehumanized by claims that they act under the direction of evil Hamas to dig tunnels and rain down bottle rockets on hapless "Israeli" civilians. The reality is, however, quite different. It is the Gazans who have been subjected to murderous periodic incursions by the "Israeli" army, a procedure that "Israel" refers to as "mowing the grass," a brutal exercise intended to keep the Palestinians terrified and docile.

The story of what happened in Gaza on Friday had largely disappeared from the US media by Sunday. On Saturday, The New York Times reported the most recent violence this way: "...some began hurling stones, tossing Molotov cocktails and rolling burning tires at the fence, the ‘Israelis' responded with tear gas and gunfire." Get it? The Palestinians started it all, according to "Israeli" sources, by throwing things at the fence and forcing the poor victimized "Israeli" soldiers to respond with gunfire, presumably as self-defense. The Times also repeated "Israel's" uncorroborated claims that there were gunmen active on the Gazan side, but given the disparity in numbers killed and injured - zero on the "Israeli" side of the fence - the Palestinian shooters must have been using blanks. Or they never existed at all.

The "Israelis" reportedly also responded to "suspicious figures" on the Gazan side with rounds from tanks, killing, among others, a farmer far from the demonstrations who was working his field. "Israeli" warplanes and helicopters also joined in the fun, attacking targets on the Palestinian side. Drones flew over the demonstrators, spraying tear gas down on them. One recalls that the major "Israeli" assault on Gaza in 2014 included vignettes of "Israeli" families picnicking on the high ground overlooking the assault, enjoying the spectacle while observing the light-and-sound show that accompanied the carnage. At that time, more than 2,000 Gazans were killed and nearly 11,000 were wounded, including 3,374 children, of whom over 1,000 were permanently disabled... If the current slaughter in Gaza continues, it would be a shame to forego the entertainment value of a good massacre right on one's doorstep.

The reliably neocon Washington Post also framed the conflict as if "Israel" were behaving in a restrained fashion, leading off in its coverage with "‘Israel's' military warned Saturday it will step up its response to violence on the Gaza border if it continues..." You see, it's the unarmed Palestinians who are creating the "violence." "Israel" is the victim acting in self-defense.
The newspaper coverage was supplemented by television accounts of what had taken place. ABC News described "violent clashes," implying that two somewhat equal sides were engaged in the fighting, even though the lethal force was only employed by Israel against an unarmed civilian population.

The backstory to the killing is what should disturb every American citizen. When it comes to disregard for United States national sovereignty and interests, the "Israelis" and their amen chorus in Washington have dug a deep, dark hole and the US Congress and White House have obligingly jumped right in. Since June 8, 1967, when the "Israelis" massacred the crew of the USS Liberty, "Israel" has realized it could do whatever it wants, whenever it wants, wherever it wants, any time it wants, to anybody...including American servicemen, and the US would do nothing.

Let me speak plainly. The existence of many good "Israelis" to who oppose their own government's policies notwithstanding, the current "Israel" is an evil place that Americans should be condemning, not praising. Prime Minister Benjamin Netanyahu should not be receiving 29 standing ovations from Congress. He should be rotting in jail. "Israel's" shoot-to-kill policy and dehumanization of the Palestinian people is nothing to be proud of. That the United States is giving this band of racist war criminals billions of dollars every year is a travesty. That the reputation of American has been besmirched worldwide because of its reflexive support of anything and everything that this rogue regime does is a national disgrace.

Gazans are demonstrating in part because they are starving. They have no clean drinking water because "Israel" has destroyed the purification plants as part of a deliberate policy to make life in the Strip so miserable that everyone will leave or die in place. And even leaving is problematical as Israel controls the border and will not let Palestinians enter or depart. It also controls the Mediterranean Sea access to Gaza. Fisherman go out a short distance from the shore to bring in a meager catch. If they go any farther they are shot dead by the "Israeli" Navy.

Hospitals, schools and power stations in Gaza are routinely bombed in "Israel's" frequent reprisal actions against what Netanyahu chooses to describe as aggressive moves by Hamas. Such claims are bogus as "Israel" enjoys a monopoly of force and is never hesitant to use it.

Over in the other Palestinian enclave the West Bank, or what remains of it, the story is the same. Brutal heavily armed "Israeli" settlers rampage, poisoning Palestinian water, maiming and killing their livestock and even murdering local residents. Children throw stones or slap a soldier and wind up in "Israeli" prisons. The settlers are backed up by the army and paramilitary police who also shoot first. The "Israeli" military courts, who have jurisdiction over the occupied West Bank, rarely convict a Jew when an Arab is killed or beaten.

And here in America a bought-and-paid-for Congress continues to do its bit. Last week President Trump signed the so-called Taylor Force Act, part of the marathon spending bill, which will cut aid going to the Palestinian Authority while also increasing the money going to "Israel". Back in January, Congress had also cut the funding going to support Palestinians who are still living in UN run refugee camps in spite of resolutions demanding that they should be allowed to return to their homes, now occupied by "Israeli" Jews. During the perfunctory debate on the measure, Congressmen were lied to by pro-"Israel" lobbyists who claimed that Arabs are terrorism supporters and use the money to attack "Israelis".

I could go on and on, but the message should be clear to every American. There is no net gain for the United States in continuing the lopsided and essentially immoral relationship with the self-styled "Jewish State". There is no enhancement of American national security, quite the contrary, and there remains only the sad realization that the blood of many innocent people is, to a considerable extent, on our hands. This horror must end.