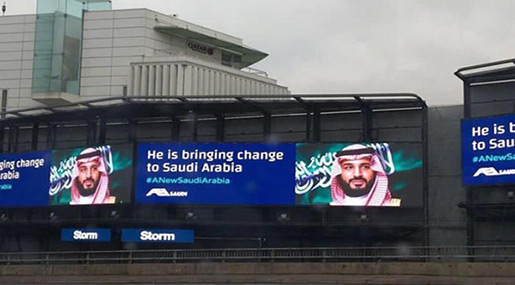 They call diphtheria the "strangling disease". Parents have to watch helplessly as it slowly clogs the throat and chokes the life out of their children. Thankfully, vaccination has wiped it out in most parts of the world. But not in Yemen. Not this past year. Hundreds of children have been infected, and dozens have died that cruelest of deaths.

They join the hundreds of other Yemeni children who have died from the worst cholera outbreak in modern history, the thousands who have succumbed to malnutrition, and the untold number of civilians killed by airstrikes on homes, streets, weddings and funerals. This has been the human price of the three-year war in Yemen, in which all parties have shown a callous disregard for life, but where the large majority of civilian deaths lies irrefutably at the door of Saudi Arabia.

Yet today the architect of that Saudi intervention in Yemen - crown prince Mohammad bin Salman - will visit Britain, and will receive the red carpet treatment from the Tory government, as if he were Nelson Mandela. This is the man behind the rolling blockade of Yemen's ports, preventing the supply of essential food, medicine and fuel to Yemeni civilians, and - on all the available evidence - breaching international law by using starvation as a weapon of war.

The man who, in an equally flagrant breach of the Geneva convention, authorized the destruction of Yemen's agricultural and food infrastructure in the early stages of the war, with systematic air strikes on farms, dairies, food factories and markets.

Prince Mohammed was rightly enraged at the Houthis' attempted missile attack on Riyadh in December, but retaliated with a 10-day barrage of indiscriminate air strikes on civilian areas, killing and injuring hundreds, including dozens of children. And while the UK government publicly insists there can be no military solution in Yemen, he has just sacked his most senior generals in an effort to achieve exactly that, and even now plans his assaults on the capital Sanaa and the port of Hodeidah, both of which will drastically escalate the humanitarian crisis. And all that is before we even mention his disgraceful attempts to subvert Lebanon's democracy, and his reported funding of groups in the Syrian war, both a part of his wider battle against Iran for hegemony in the Middle East.

If it was his regional rival, the supreme leader of Iran, visiting our capital - with his similar record of domestic human rights abuses, regional intervention and alleged support for terror organizations - the UK government would not dream of rolling out the red carpet. So why is it different for the crown prince?

Theresa May tells us it is about our mutual security and strategic interests. Or about Prince Mohammed's moves to "liberalize" women's rights, by which she means Saudi Arabia catching up with the rest of the world by promising to allow women to drive cars.

It is all nonsense. As so often, it is about nothing but filthy lucre, and this government's desperation to plug the hole that will be left in Britain's trade and growth prospects by May's refusal to stay in a customs union with the EU after Brexit.

Most nakedly, it is about the shameless bidding war to persuade the crown prince to include the London Stock Exchange in any international listing of the Aramco oil company, billed as the biggest stock market flotation in history.

Most pertinently, it is about the huge increase in arms sold by Britain to Saudi Arabia since the start of the war in Yemen - a trade so shameful that the government now actively encourages applications for "open export licenses" by UK arms firms, precisely to hide what weaponry Riyadh is receiving, and its true value. It's clear the government doesn't care a jot about human rights or breaches of the Geneva Convention if there is a chance instead to boost its balance sheet.

Britain is the official pen-holder for the United Nations Security Council on matters relating to Yemen. In October 2016, our government floated a draft resolution calling for a permanent ceasefire in the country to allow for immediate humanitarian relief and talks on a political solution. Prince Mohammed's acolytes immediately objected, and 17 months on that draft resolution has still not been formally presented to the council. And so his brutal, murderous war continues, without anyone in our government lifting a pen to stop him. Instead, today they fete the crown prince. But millions of us will be saying: not in my name.