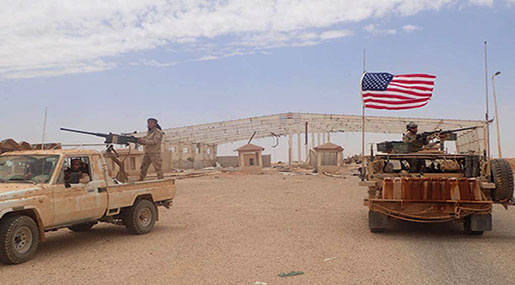 Russia reminded the US that its presence in Syria is illegal after the coalition struck pro-government militias.

Washington, for its part, claimed it reserves the right for what it referred to as "defensive" attacks to achieve peace "from a position of strength."

The US presence in Syria is "actually illegal," the Russian Ambassador to the UN reminded his Western counterparts on Thursday at a closed-door meeting of the UN Security Council.

"Nobody invited them there," Vasily Nebenzya stated, emphasizing that a hard fought for stability in Syria is being jeopardized by US actions.

Earlier on Wednesday, the US-led coalition said it carried out several "defensive" airstrikes on Syrian forces in Deir Ez-Zor province in retaliation for what they described as an "unprovoked" attack on the so-called Syrian Democratic Forces [SDF] and foreign military "advisers."

According to the Russian Defense Ministry, the Syrian militant group was advancing against a "sleeper cell" of Daesh [the Arabic acronym for ‘ISIS/ISIL' group] terrorists near the former oil processing plant of al-Isba, when it suddenly came under massive air strikes.

Damascus called the attack a war crime, while the Russian military asserted that Washington's true goal is to capture "economic assets" in Syria.

The Russian Foreign Ministry spokeswoman Maria Zakharova affirmed that the US military presence in Syria poses a dangerous threat to the political process and territorial integrity of the country, while Foreign Minister Sergey Lavrov called the strike another violation of Syria's sovereignty by the US.

The US, however, remained unmoved, promising to continue to support the US-allied forces in Syria at any cost.