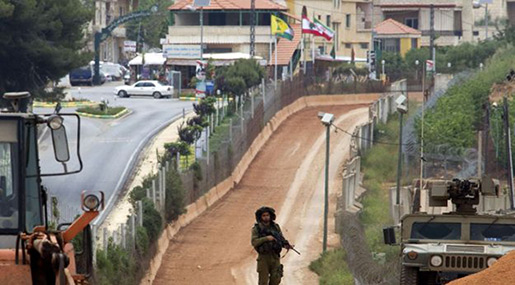 
Roni Daniel, the military commentator for "Israel's" Channel 12, said that in recent years the "Israeli" army has been carrying out large-scale engineering work to reshape the terrain on the border with Lebanon in a bid to prevent a [Hezbollah] infiltration into the northern settlements.

"In exchange for every settlement adjacent to the fence and in places where there are more than four settlements adjacent to the fence, the army creates a 15 to 20 meter-high escarpment, which makes it difficult for the infantry to try to infiltrate," Daniel wrote in his article published on "Israel's" Channel 12 website.

He further added: "It is clear that such actions do not guarantee complete success, but they may impede or at least hinder Hezbollah forces that will try to reach a settlement."

"The engineering operation led by Deputy Chief of Staff Major General Aviv Kochavi, when he was head of the Northern Command, has been ongoing for several years, and today this process is about to be completed," Daniel added. "At the moment, the army wants to add concrete walls to the obstacles, similar to those built in the vicinity of occupied Al-Quds, only in sensitive places and along several kilometers. Thus far, things are clear and indisputable."

Daniel touched on the meetings being held in the United Nations center in Ras al-Naqoura between representatives of the Lebanese army and the enemy's army under the auspices of the international organization. He points out that "representatives of the Lebanese army spoke at one of the last meetings about 13 points of disagreement over the border line. The dispute has been resolved on seven points while six remain. There is still disagreement over them."

In this regard, Daniel said that during "the last meeting, Lebanon presented opposition to the construction of the wall along those six places, but it can be emphasized that this position is directed by Hezbollah. The disagreements have not been resolved, and the Lebanese demand entails that construction work on the wall should not commence before these disagreements are resolved."

The "Israeli" Channel 12 commentator on military affairs believes that "Hezbollah is behind all these allegations because it has intentions to infiltrate the settlements in case a war broke out as part of its combat actions."

"Hezbollah Secretary General Sayyed Hassan Nasrallah has already announced his desire to occupy Galilee. The Zionist response at that meeting in Naqoura was that there is no intention to stop the construction work of the wall because it is inside the settlements. This incident itself does not create a special reality on the northern border. The recent dramatic events, such as the entry of Iranian forces or allied factions and their stay in Syria and also reinforcing Hezbollah with long-range and accurate missiles are not simple security concerns," he added.

According to the Zionist commentator, "the issue of the wall can hardly be an excuse, but Hezbollah does not want to clash with the army. But obviously if we include all the activities of Iran, Hezbollah and Russia, which agreed to the permanent Iranian presence on Syrian soil, and Tehran's desire to find systems to convert ordinary rockets into precision rockets on Syrian or Lebanese territory, only adds more to existing tensions."

The commentator concluded by saying that "none of the parties at this stage is involved in large-scale fighting, but the situation is fluid and sensitive to the extent that the deterioration into large-scale clashes is certainly possible. Will it deteriorate into war? This is a reality the army is preparing for by undertaking a series of activities and maneuvers. Senior officials said the army was more prepared than ever to take a violent step in Lebanon. The wise conduct of both parties may delay the collision, but this is not at all guaranteed."