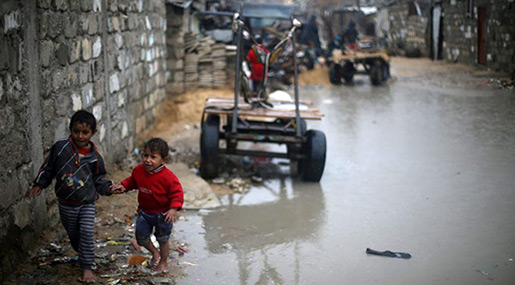 As deteriorating conditions raise the risk of an uncontrollable flare-up, "Israeli" officials are worried about possible consequences of continued military pressure on the Gaza Strip.

Senior "Israeli" military officials are voicing surprisingly similar opinions about the situation in the Gaza Strip. The economy in the Strip is on the verge of total collapse, "like from zero to below zero," as one official put it, and so is civilian infrastructure.

But politicians in the "Israeli" entity are acting as if military pressure can continue on the Strip, ignoring the worsening economic situation, and that has experts worried. In the long term, continually deteriorating infrastructure brings the risk of an uncontrollable blow-up in the Strip.

About two weeks ago, the number of trucks passing through the "Kerem Shalom" crossing between the "Israeli" entity and Gaza has been cut in half due to the decline in purchasing power of Gaza's people. The latest statistics said the number of trucks is down a third, to between just 300 to 400 trucks a day.

About 95 percent of Gaza's water is undrinkable. Hundreds of thousands of cubic meters of sewage flow into the Mediterranean daily, reaching the "Israeli" entity's shores as well. There's a bit more electricity available now - up to six or seven hours a day, thanks to a decision by the Palestinian Authority to go back to funding some of the power, which is purchased from the "Israeli" entity. Experts warn of the outbreak of infectious diseases.

Unemployment in the Gaza Strip is inching toward 50 percent and is even higher among young people.

The "Israeli" entity is considering changes in civilian policy toward the Gaza Strip. But so-called Transportation and Intelligence Minister Yisrael Katz has been unable even to advance a serious discussion on a plan for an artificial island off the Gazan coast, which "Israeli" Prime Minister Benjamin Netanyahu and War Minister Avigdor Lieberman oppose. Discussion of other proposals, like bringing in thousands of laborers from the Strip to work in "Israeli" border communities, have dragged on for months.