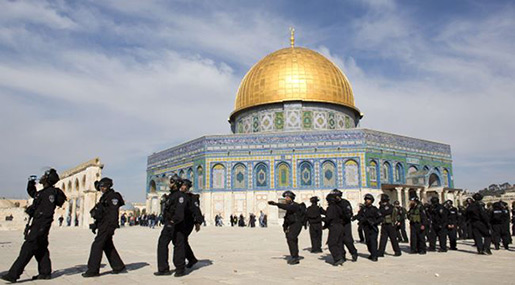 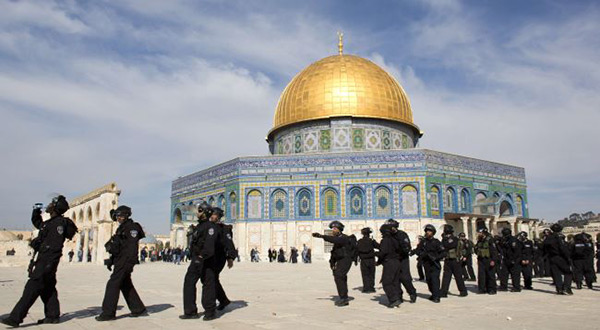 42 settlers showed up at the site as part of the morning break-in shift and carried out a round of sacrilegious tours which lasted for three hours and a half.

Another 37 fanatic "Israeli" defiled al-Aqsa after they stormed the site via the Maghareba Gate.

At the same time, the peaceful Muslim worshipers have been subjected to tough crackdowns and restrictions by the "Israeli" police near the main entrances to the site.

Several Muslim worshipers had been searched and dozens more have had their IDs seized while attempting to enter al-Aqsa to perform their daily prayers.

In another development, the "Israeli" military set up roadblocks, cordoned off Palestinian villages and deployed reinforcements to the occupied West Bank on Wednesday, a day after an "Israeli" settler was killed in a heroic Palestinian operation.

"Israeli" troops had combed villages around the city of Nablus, a military statement said.

In overnight raids, "Israeli" troops had detained 18 Palestinians as they carried out across the occupied West Bank, Palestinian Prisoners' Club (Nadi Al-Asir) or PPC said.

The Palestinian Prisoners' Club said that "Israeli" forces had detained Nasser Qous - the head of the PPC - Abir Ziyad, her husband Ziyad Ziyad, Nasser Ajaj, Khalil Bashir and Mohammad Sayyad, all of whom were from al-Quds.

According to PPC's statement, a 16-year-old Palestinian and his 26-year-old brother were detained from Ariha [Jericho].

In the northern West Bank, PPC reported that "Israeli" forces detained two Palestinians from the Jenin district, two from the Nablus district, and one from Qalqilya.

One of the detainees was identified as Jihad Abu Hmeid, 30, whose four brothers are serving life sentence in "Israeli" prison.

However, the "Israeli" army said in a statement that 11 Palestinians were detained during raids.