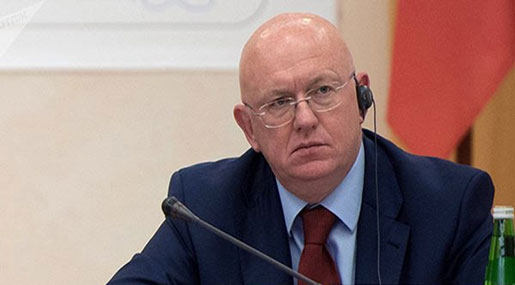 By calling a UN Security Council meeting with the demand to support anti-government protesters in Iran, the US is trying to bend the UNSC mandate, which does not deal with countries' internal affairs, Russia's UN envoy said.

"We obviously regret the loss of lives as a result of the demonstrations that were not so peaceful." Russia's envoy to the UN Vassily Nebenzia said.

Nebenzia slammed the US for diverting attention from important international issues the UN Security Council should be addressing.

"You are dispersing the energy of the Security Council, instead of focusing it on dealing with key crisis situations in Afghanistan, Syria, Libya, Iraq, Yemen, DPRK, the African continent. Instead of that, you are proposing that we interfere in the internal affairs of a state."

"We don't want to get involved in destabilizing Iran or any other country," Nebenzia added.

He also reminded Washington of its own history of cracking down on protests.

"If we follow your logic, then we should have meetings of the Security Council after the events in Ferguson or after the dispersal by force of the Occupy Wall Street movement in Manhattan."

In her opening speech, the US Ambassador to the UN, Nikki Haley, dubbed the ongoing unrest in Iran a "spontaneous expression of fundamental human rights," claiming the protests were simultaneously playing out in "over 78 locations."