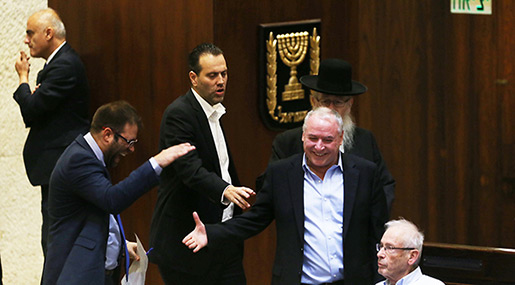 The controversial recommendations bill, which bars police from publicly releasing its recommendations on indictment, passed early Thursday in the Knesset in second and third reading, making it law. 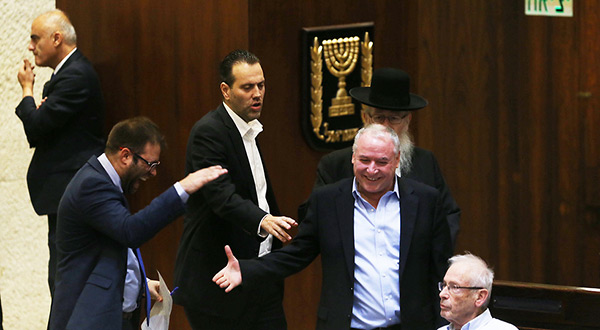 The Yesh Atid party appealed the legislation to the High Court of Justice on Thursday morning, making good on party leader Yair Lapid's threat at the Knesset on Wednesday night. In addition to Lapid's appeal, two other appeals were submitted against the legislation.

"I invite all the people in the opposition who are opposed to this to join us," Lapid said on Wednesday night, ahead of the bill's passing. "If that doesn't happen, I just want to say this: it is customary for parties to go to elections and say what they will do if they win. If we win in the elections, we will cancel the Recommendations Law, we will cancel the Primaries Law, the Trains Law and the Supermarket Law because all of these laws are undemocratic and they are twisted and are humiliating..."

The "Israeli" entity's so-called Justice Minister Ayelet Shaked (Bayit Yehudi) expressed her disapproval with Lapid's threats and statements, calling him out on his decision to take the matter to the so-called HCJ.

"You don't understand how the Knesset works. After a long discussion like this without any constitutional reason, you are running to the HCJ. You are trampling on the Knesset, and embarrassing everyone who is in here," Shaked retorted.

Yesh Atid MK Karine Elharrar, who submitted the bill to the court on Thursday, said the Recommendations Law "is one of the most corrupt laws the coalition has passed. It's a law born in sin, a personal law meant solely to protect the prime minister from investigations against him."

Knesset legal adviser Eyal Yinon and Attorney General Avichai Mandelblit would have to defend the law at the High Court. Both Mandelblit and State Attorney Shai Nitzan have come out against the law throughout the legislative process. However, they have never deemed the law unconstitutional.

Regardless, the chances the court would strike down the law are slim. But it is possible to assume the judges would raise questions as to the need for such a law and the appearance it was passed to protest public officials who committed offenses.

Knesset Speaker Yuli Edelstein warned that if Lapid followed through with his threats to take the matter to the courts, he would not disallow the use of Clause 98 preventing a further filibuster on the vote, essentially stopping Yesh Atid from using the tactic once again to stop the bill's passage.

The Recommendations Law will put an end to a police practice in recent years to release a statement at the end of any investigation that is of interest to the public. If the police think enough evidence has been collected to file an indictment, it normally includes a note to that end in its investigation conclusions before prosecutors decide whether or not to press such charges.

Opposition lawmakers have said that the bill, tabled by "Israeli" Prime Minister Benjamin Netanyahu's rightist Likud party, was designed to dampen public anger over police investigations against him, which have fueled weekly demonstrations in Tel Aviv and calls for the premier's ouster.

Netanyahu is a suspect in two cases. In one, he is alleged to have meddled in the media industry. The other concerns gifts he received from wealthy businessmen. He denies any wrongdoing.

Netanyahu defended the bill on December 3 as "intended to prevent publication of police recommendations which would leave a cloud over innocent people, something that happens every day." In 60 percent of cases where police recommend criminal charges, prosecutors decided not to indict, Netanyahu noted.

But the prime minister also called for the bill to be amended so it did not apply to the criminal investigations against him.

The final draft stipulated that the law would not be in effect regarding investigations that predate its ratification.

That has done little to mollify the opposition, whose members started filibustering at the Knesset on Tuesday, raising some 1,000 reservations against the bill.

Coalition MKs Rachel Azaria and Merav Ben Ari from the Kulanu party left the Knesset chamber before the vote, but their absence did not affect the end result. Netanyahu, Minister Haim Katz and MK David Bitan also did not vote due to the ongoing police investigations against them.

Zionist Union leader Avi Gabbay said following the vote that "December 27 is a dark day in the fight against crime and corruption. I repeat my commitment-a government led by me will cancel the Recommendations Law, the supermarkets bill and the jobs bill."