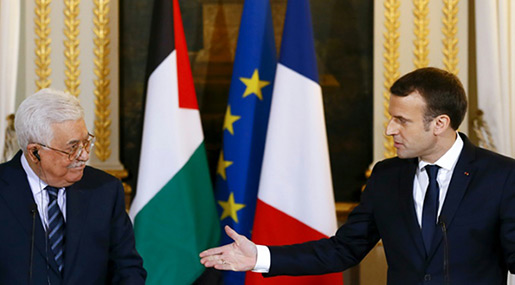 French President Emmanuel Macron slammed the Trump Administration on Friday for unilaterally recognizing al-Quds [Jerusalem] as the so-called capital of the "Israeli" entity. 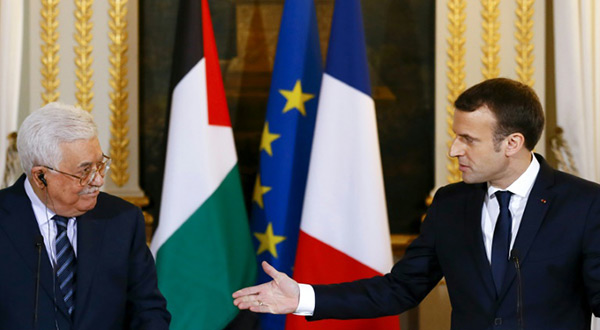 "The Americans have marginalized themselves and I am trying to not do the same thing," Macron told a joint press conference with Palestinian president Mahmoud Abbas during which he also ruled out recognizing a Palestinian state in the short term.

"I do not approve of Trump's decision and regarding Jerusalem [al-Quds]," Macron said.

Abbas said that his people would "no longer accept" any "peace plan" proposed by the United States following Washington's decision.

The Trump administration has been preparing a plan in secret which is expected to be presented to the two sides in 2018.

"The United States has proven to be a dishonest mediator in the peace process and we will no longer accept any plan from the United States," Abbas said after meeting French President Emmanuel Macron in Paris.

He also hit out at efforts by the US to intimidate countries ahead of a vote at the UN on Thursday which saw 128 countries condemn Washington's decision to recognize al-Quds as the so-called "‘Israeli' capital".

"I hope that the others will learn the lesson and understand that you cannot impose solutions by using money and trying to buy off countries," he added.
US Ambassador Nikki Haley, noting that Washington made "generous contributions" to the United Nations, had warned that the vote would affect "how Americans... look at countries who disrespect us in the UN."

Macron repeated his earlier condemnations of the US decision on al-Quds, but he also ruled out recognizing Palestine as a state unilaterally which France has mooted previously.

He added: "The solution will be built around two states so inevitably there will be a moment in the process when there is recognition. I want to do it at a moment that will help build peace on the ground."

Macron has also ruled out launching a fresh French peace initiative in the short term, saying he is waiting to see what happens with the American effort which Abbas rejected on Friday.

The 40-year-old French leader has stepped up his meetings with leaders from the Middle East in recent weeks, hosting the "Israeli" entity's President Benjamin Netanyahu in Paris less than a fortnight ago.

Macron said he would visit the Palestinian territories in 2018.

"I have committed myself very clearly to doing everything" to further the "peace process", Macron said.

"We have trust in you. We respect the efforts made by you and we count heavily on your efforts," he said.