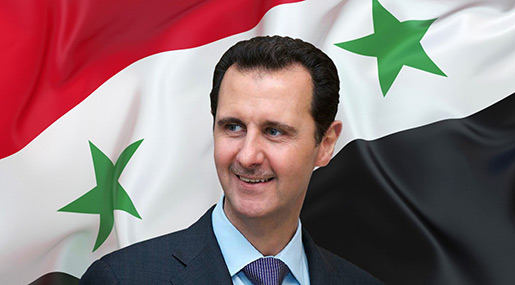 Syrian President Bashar Assad sent a letter to Leader of the Islamic Revolution His Eminence Imam Sayyed Ali Khamenei, thanking him and congratulating the Iranian nation on recent advances in Deir Ez-Zor. 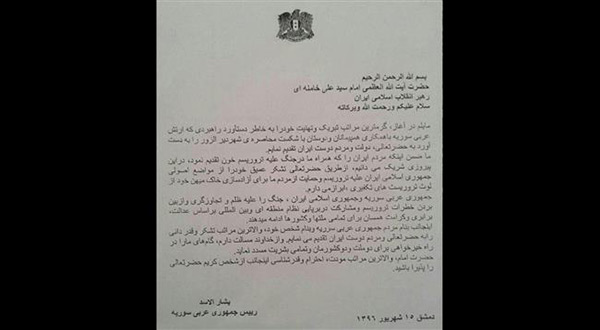 "In the beginning, I would like to congratulate in the warmest terms Your Excellency and the friendly government and people of Iran on the strategic achievements that the Syrian Arab Army has made with the cooperation of our allies and friends, in breaking the siege on Deir Ez-Zor city," Assad said in a part of the message.

Last week, Syrian forces managed to break the years-long siege on Deir Ez-Zor, with the battle continuing to recapture the city and drive out Daesh terrorists.

President Assad said, "We regard the Iranian people who have always dedicated their blood alongside us in the fight against terrorism as partners in this victory."

"Also, through Your Excellency, I express my deep gratitude to the Islamic Republic of Iran over its principled positions against terrorism and its support for our people to liberate our homeland's soil from the contamination of Takfiri terrorists," he added.

Iran has been providing military advisers on the request of the Syrian government, helping turn around the battle which has been going on for more than six years now.

Assad said, "The Syrian Arab Republic and the Islamic Republic of Iran are continuing the fight against oppression and aggression and eliminating the threats of terrorism."

The Syrian leader also called Iran and Syria partners "in establishing a regional and international system based on justice, equality and dignity for all nations and countries."

"In the name of the people of the Syrian Arab Republic, I bestow my highest gratitude to Your Excellency and the friendly nation of Iran, and ask God to make our steps firmer in the cause of the well-being of our two nations and the entire humanity," Assad wrote.

Since the break of the Deir Ez-Zor siege, the Syrian army has brought reinforcements to the city which is the capital of an oil-rich eastern province of the same name.

The Wahhabi Daesh [Arabic acronym for "ISIS" / "ISIL"] has recently retreated from much of the territory under its control amid sweeping advances by Syrian army soldiers and allied fighters on the battlefield.