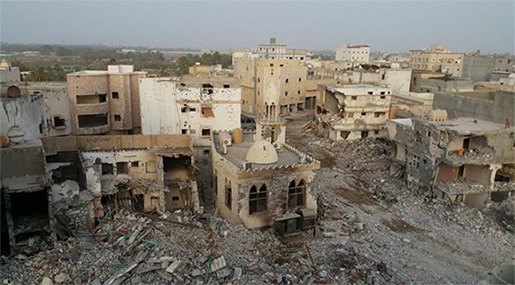 When Donald Trump arrived in Saudi Arabia on his first trip abroad as US President in May, officials in Riyadh made a spectacular effort to promote the idea of unity in the Muslim world, inviting more than 100 leaders of Muslim nations to attend the Arab Islamic American Summit with the new President. 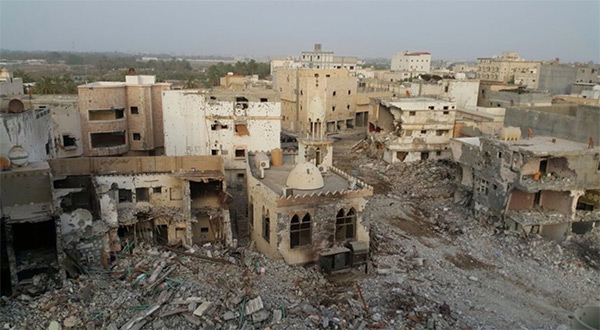 Critics pointed out that the Saudi-led coalition contributing to the misery in Yemen put paid to that idea. Even closer to home, however, the Saudi government had just begun a war on a town in the country's restive east - a battle that is still raging despite receiving very little media coverage both within the conservative Kingdom and outside it.

Traditionally Shia, Awamiya - a 400-year-old town in the eastern Qatif province home to around 30,000 people - has been surrounded by siege barricades put up by the security services since attempts to evict residents turned violent on 10 May.

Since then, the situation has rapidly deteriorated. Locals report at least 25 people have died in shelling and sniper fire, and pictures purportedly of streets covered in rubble and sewage look more like a scene from Syria than an oil-rich Gulf city.

Information from Awamiya is difficult to verify; foreign media are not being allowed near the area without government chaperones, which means the world is reliant on heavily-controlled Saudi state media, unreliable Shia-focused news sites and social media from inside the city for even the smallest glimpse into what is going on.

Grisly pictures of wounds inflicted by snipers and the destruction of homes and shops cannot be independently verified.

But the picture painted by several researchers and Saudis The Independent spoke to - one protester inside the besieged city, and two peaceful pro-Awamiya activists now living outside the country - is of an untenable humanitarian situation.

"I was a peaceful protester, most of us in Awamiya were, until the government decided to list us as wanted terrorists. All we did was maintain calls for reform. Because we were not afraid of the regime, they targeted the whole city," an anti-government activist said in a rare interview with Western media.

Government forces raided his house at the beginning of the siege, he said, beating his wife, pointing weapons at his five-year-old daughter and lifting his eight-month-old baby girl high and threatening to drop her.

"They told my little girl, ‘We will kill your father and throw his head between your legs.'

"We had no choice. Defending our lives and our women is a duty. Houses have been destroyed by bombs, heavy shooting, RPGs... Everyone is a target."

Awamiya was sealed off with roadblocks three months ago after the local population refused to comply with security forces bringing in bulldozers and other construction equipment on orders to demolish and redevelop the ancient area.

The region has seen periodic bouts of unrest since "Arab Spring" calls for an end to discrimination against minority Shia citizens began in 2011.

Riyadh, for its part, claims that the protesters in Awamiya are terrorists intending on destabilizing the country as a whole, and must be stopped from using the town's abandoned buildings and winding narrow streets as hideouts.

Other pro-Awamiya activists were vague when pressed on the subject - but agree that the push to tear down the neighborhood is motivated by the desire to crack down on the rebellious city for good.

"I've documented conflict in Saudi Arabia before but nothing like this. I've seen protests, but nothing this militarized," said Adam Coogle, a Middle East researcher for Human Rights Watch.

"The details are thin on the ground but what is clear is there are heavy clashes going on between the state and its citizens in a Saudi city right now, and that's pretty unprecedented."

Many residents in Awamiya are too afraid of shelling and snipers to leave their homes, despite the fact in many areas the water mains and electricity have been disconnected, leaving them without fresh water or air conditioning in the punishing summer heat.

"People are so afraid that sometimes the bodies have been left in the streets for days," a US-based activist originally from the city said.

Ambulances and sanitation vehicles have had difficulty accessing the town after being held up at checkpoints, contributing to the unlivable conditions, several reports say.

Awamiya was also the home of Sheikh Nimr al-Nimr, an influential Shia cleric who was executed on trumped-up terrorism charges last year. His death led to demonstrations worldwide.

The current stand-off in the town cannot be reduced to a sectarian issue, said Ali Adubasi, the Berlin-based director of activist group European Saudi Organization of Human Rights, who himself fled the country in 2013 after being detained and tortured by the state several times.

"When they killed Sheik Nimr, they also executed four Shia and 43 Sunnis, so there is more to the situation than that.

"I think they'd crack down the same way on any opposition area. What they want is to empty the town of people full stop, to end the protests."

Last Friday, the Saudi authorities once again issued eviction notices for Awamiya's residents, instructing them to leave through two designated roads and to wave white clothing as they did so.

The order was coupled with intensified fighting - which Saudi media said killed at least seven people. Activists accuse the authorities of firing randomly at civilians, their homes and cars, claims Riyadh has denied.

The US-based activist said hundreds of people have since fled - by some counts up to 90 per cent of the local population, leaving around 3,000-5,000 people inside. While some accommodation in nearby towns has been provided, it has been criticized as not nearly enough to cope with the expected demand.

In May the UN condemned the redevelopment plans, accusing the authorities of attempting to forcibly remove residents from Awamiya without offering adequate resettlement options in an operation which threatens the "historical and cultural heritage of the town with irreparable harm".

The outside world, however, remains largely unaware of the turmoil consuming Saudi Arabia's east.

"This is a crisis. And no one is even aware, despite social media, despite the internet," Mr Adubasi continued. "In Saudi Arabia if you want to repress human rights and you want to crack down on dissent it is still 100 per cent possible even in the 21st century."

The Saudi embassies in both Beirut and London were contacted for comment on the many allegations in this story, but representatives were not immediately available.