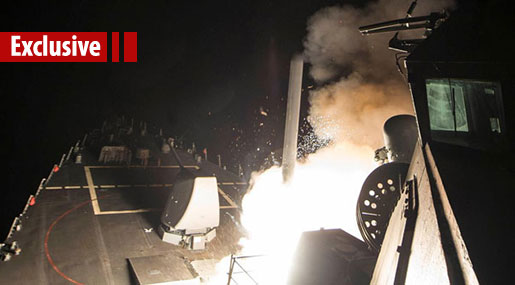 The US administration did not wait for what might come out of the UN Security Council or from the UN institutions, especially after the request for the establishment of a commission of inquiry and fact-finding over Khan Sheikoun, which was subjected to an attack by internationally prohibited poisonous chemical gases. It rushed to target the Shayrat Air Base in eastern Homs with dozens of Tomahawk missiles launched from its warships in the Mediterranean. 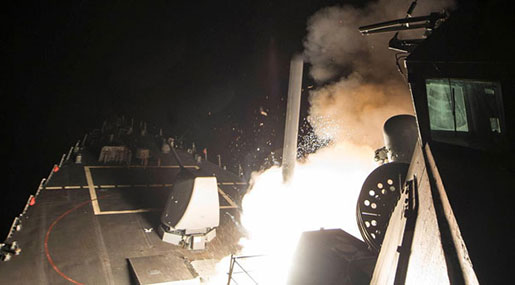 The reasons for accelerating the launching of the missile strike

First, the US acceleration in launching the missile strike appeared to be a race against a series of facts that have begun to impose themselves on this subject. One of the most important facts is what the US media and more than one newspaper have been circulating regarding Syrian witnesses from the affected area in Khan Sheikhoun unanimously agreeing that the explosion took place in the targeted building because it was struck by a missile from the air. A small cloud of smoke - a result of the explosion of barrels of poisonous gases - appeared shortly afterwards. This is completely contrary to the specifications and methods used in a chemical weapons strike, which requires a military technician to carry out the explosion using a temporary sheath that explodes at least 100 meters above the surface in order to avoid the ineffective launch of this type of weapon that can happen in case the rocket carrying poisonous gas explodes directly on the target.

Second, any scientific inquiry by a neutral international fact-finding commission that will operate on a broad basis will inevitably involve a sensual inspection of the targeted location. This will certainly show the nature of the explosion and the spread of toxic substances as a result of a rocket loaded with these materials or as a result of an explosion of barrels filled with these substances in the targeted area. The investigation will also include a comprehensive and accurate inspection of the airport where everyone agrees the aircraft took off from as part of its usual bombing runs, including its daily and routine air coverage of the spot where the chemical explosion took place. It will also include the inspection of all the air base depots, which will certainly show the existence or absence of the missiles or bombs loaded with chemical weapons whose effects cannot be obscured or hidden from a scientific standpoint. The missile strike against the air base, the warehouses, and bomber jet launchers eliminates any possibility to reach the scientific data needed by any commission of inquiry to investigate the facts.

The real goals behind the strike

This missile strike came so fast to achieve the following objectives:

- First, for the sake of American internal politics, namely the position of the US president and the wide criticisms against him, which have forced a fluctuation in his decisions that marked his campaign, resulting in the apparent contradiction in his policy on terrorism and what he has been able to implement so far despite his claims to the contrary.

- Second, for military and field accounts. Choosing the Shayrat airbase, the most active in its air operations in confronting Daesh in eastern Syrian, came to extract the vital strategic point from the Syrian Arab Army, which it uses to press eastwards. The army's advances from southeast of Aleppo and east Palmyra are posing a threat to Daesh. Since all US-backed units were unable to achieve any real progress or any strategic impact on the Raqqa neighborhood - even though they are supported directly by more than one commando unit - the US administration considered it necessary to launch a missile strike at this airport to delay the advance of the Syrian Arab Army until it finds a solution to the inability and failure of those it is supporting to replace Daesh and race the Syrian Arab Army in doing so.

Third, the 'Israeli' influence and its interests cannot be excluded from targeting the airport and its surroundings. The airbase houses the missile system that has recently pursued 'Israeli' launchers, from which strategic rockets have threatened 'Israel's' territory in the occupied Palestinian territories. This of course serves 'Israel's' maneuver in exploiting the subject of toxic gases in Khan Shoukhan to target a strategic Syrian military post that was difficult for it to get to under a solid Russian position that prevented it from being targeted in a broad manner.

From here, it is possible to determine the real dimensions of this American missile strike of the Syrian air base in Shayrat, why it worked to obliterate and hide evidence that might exonerate the Syrian state, or why it really targeted it and what goals lay behind this missile strike.