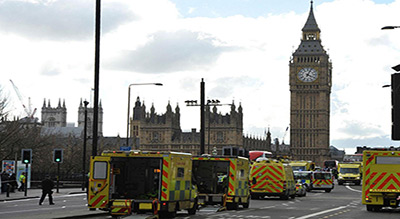 In the immediate aftermath of what police are describing as a terrorist incident in and around Parliament, at least three facts stand out suggesting that the attacks are similar to those carried out over the last two years by "ISIS" supporters in Paris, Nice, Brussels and Berlin. 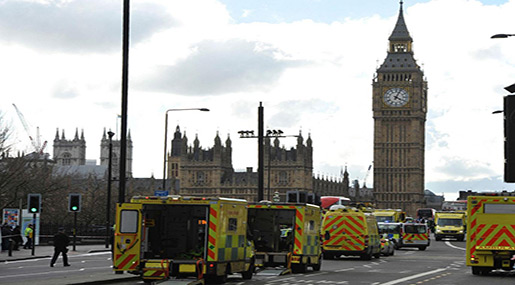 The similarities with the events today are in the targets of the attacks which in all cases were ordinary civilians, but the means of trying to cause mass casualties differs. In Nice, Berlin and London no fire arms were used by the attackers, while in Paris and Brussels there was a coordinated assault in which guns and explosives were employed.

In Nice on 14 July 2016 a truck killed 86 people and injured hundreds, driving at speed through crowds watching a firework display on the Promenade des Anglais until the driver was shot dead by police. "ISIS" claimed that he was answering their "calls to target citizens of coalition nations that fight ‘ISIS'". Britain is a member of the coalition with aircraft and Special Forces troops in action against "ISIS" in Iraq and Syria.

"ISIS" claimed responsibility for a lorry which drove into a Christmas market in 19 December 2016, killing 12 and injuring dozens. As with Nice, this appears to resemble what happened on Westminster Bridge, going by first reports.

The overall location of the attacks today may be significant and would fit in with the way that "ISIS" normally operates when carrying out such atrocities. This is to act in the center of capital cities or in large provincial ones in order to ensure 24/7 publicity and maximize the effectiveness of the incident as a demonstration of "ISIS's" continuing reach and ability to project fear far from its rapidly shrinking core areas in Syria and Iraq.

"ISIS" is sophisticated enough to know that such attacks carried out in news hubs like London or Paris will serve their purposes best. In cases of attack with a knife or a vehicle then "ISIS" would not need to provide more than motivation, though individuals seldom turn out to have acted alone. It may no longer have cells in Europe capable of obtaining fire arms or making bombs.

It could be that the attacks were carried out by another group, the most obvious candidate being one of the affiliates of al-Qaeda in Yemen. Syria or elsewhere. On 11 March 2017 Jabhat Fateh al-Sham, formerly Jabhat al-Nusra, the Syrian affiliate of al-Qaeda, carried out two bombing attacks in Damascus, killing 59 people, mostly Shia pilgrims from Iraq visiting holy sites. But the Syrian arm of al-Qaeda, while carrying out suicide bombings against targets in Syria, has previously avoided doing so abroad in order to make itself more diplomatically palatable than "ISIS".

Could the attacks on Westminster Bridge and in Parliament be linked to the siege of Mosul where "ISIS" has lost the east of the city and half the west since an Iraqi army offensive started o n17 October? "ISIS" has traditionally tried to offset defeats on the battlefield, by terrorist attacks aimed civilians that show they are still very much a force to be feared. The same logic led to the ritual decapitation, drowning and burning of foreign journalists and domestic opponents.

The most likely speculation at this early stage is that the attacks in London are inspired or directed by "ISIS", but there is too little evidence to make the connection with any certainty. "ISIS" often holds off claiming such atrocities for several days to increase speculation and intensify terror.