"In the face of ‘Israel's' threats to destroy Lebanon's infrastructure, we will not abide by red lines, especially regarding Haifa's ammonia and the nuclear reactor in Dimona," Sayyed Hassan Nasrallah told the Islamic Republic News Agency [IRNA] on February 20. 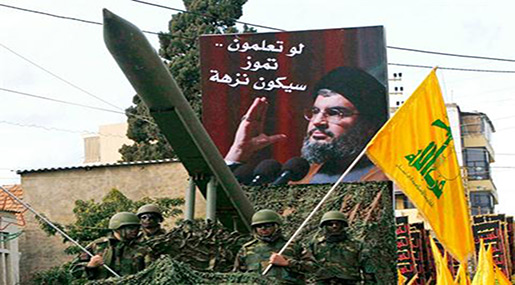 Hezbollah's Secretary General went on to warn Tel Aviv to "count to a million" before considering another military venture in Lebanon.

The message is simple: any direct, prolonged, "Israeli" attack on Hezbollah in Lebanon would be too costly for Israel.

No zero hour set for the next "Israel"-Hezbollah war

Days earlier, Sayyed Nasrallah provoked a response from the face of the "Israeli" intelligence apparatus by calling on Tel Aviv to "dismantle [the] Dimona nuclear facility".

"The ‘Israeli' nuclear weapon that represents a threat to the entire region, we will turn it into a threat for ‘Israel'," the leader of the Lebanese resistance said during a memorial marking the martyrdom of three top Hezbollah commanders.

"Israeli" Minister of Intelligence and Atomic Energy Yisrael Katz was quick to respond, hoping to ease the hysteria in "Israel" that often accompanies Sayyed Nasrallah's speeches.

"If Nasrallah dares to fire at the ‘Israel' homefront or at its national infrastructure, all of Lebanon will be hit," said Katz. He also called for "debilitating sanctions" on Iran over its support for Hezbollah.

Katz's comments are telling in that Tel Aviv's strategy for ‘dealing' with the ‘resistance axis' appears to involve the same-old recipe - the obliteration of civilian infrastructure in Lebanon and lobbying Washington to sanction Tehran. Both approaches have been tried and tested, and neither came close to undermining Hezbollah's expanding capabilities.

The rhetoric points to a serious lack of appetite on the part of the political and military establishment in Tel Aviv for any kind of escalation of the frozen conflict with Hezbollah. It also suggests that the Israelis are perfectly content with carrying on with the so-called ‘battle between the wars' - involving occasional "Israeli" strikes inside Syria - while treading carefully to keep the "national infrastructure" out of Hezbollah's crosshairs.

"Israel's" Chief of Staff Gadi Eisenkot confirmed as much during a closed-door meeting of the ‘Knesset's Foreign Affairs and Defense Committee', in which he downplayed the chances of another war with Hezbollah.

According to Beirut-based strategic affairs researcher, Ali Shehab, Tel Aviv has not set "zero hour for the next war".

"No field indicators point to a readiness for a war on the 'Israeli' side of the border with Lebanon... No movements; such as a military buildup or transfer of ‘Israeli' forces," Shehab told the pan-Arab satellite television network, al-Mayadeen.

Shehab explains that since emerging with a bloody nose from its latest confrontation with Hezbollah in 2006, Tel Aviv looks to answer three questions before considering another attack: Is the "Israeli" army ready for a war? What are the objectives of the war? And what are the chances of successfully fulfilling the objectives?

During his recent speech, Sayyed Hassan Nasrallah echoed a similar sentiment saying that, "the issue is not about the US permission or the Arab cover, but rather about whether or not they will be able to achieve a victory. This is the main question."

Meanwhile, Hezbollah's actions are almost certain to deter the "Israelis" from dreaming of a full-scale war. Aside from the estimated 150,000 advanced rockets aimed at "Israel", Hezbollah commanders have emerged from battlefields in Syria and Iraq with invaluable combat experience, effectively transforming Lebanon into a death trap for any potential Israeli military incursion.

To make matters worse for policy makers in Tel Aviv, Hezbollah is also challenging "Israel's" traditional superiority at sea and in the air.

In an article for the "Israeli" website Walla, Amir Bohbot, claims that the resistance group - which has long since been able to assimilate the use of drones into their ground operations - now possesses an advanced naval force.

"A force that not only threatens [‘Israeli'] gas platforms and naval forces, but also Israeli merchant ships in the Mediterranean," Bohbot writes.

As the new US administration takes a more belligerent tone toward Iran, "Israel" sees an opportunity to roll back the clock to a time when Washington saw Tehran as part of an "axis of evil."

Both Tel Aviv and Persian Gulf monarchies likely view the US President Donald Trump as the new wave to carry some of their anti-Iranian policies.

But despite all the bear hugging and strong statements of support, options are increasingly limited for the declining Western/"Israeli"/Gulf axis.

With Trump's administration expressing reluctance toward the fight in Syria, which houses key Hezbollah military installations, the focus to undermine Iran and its regional allies is likely to revolve around more sanctions rather than any sort of direct military confrontation.

And while the US and "Israel" may agree on the need for another war with Hezbollah there is an obvious obstacle to achieving any sort of substantial military gains.

A defeat for the Damascus government may have helped to isolate Hezbollah and cut Iran from Lebanon. Instead, the Syrian army -- with support from Iran, Russia and Hezbollah -- turned the tide against the proxies of the Western/"Israeli"/Gulf axis, completely transforming the regional balance of power and ending Tel Aviv's prospects of a victory over the resistance.