An executive order signed by US President Donald Trump on Friday calls the admittance of Syrian national refugees into the US "detrimental," and halts the visa waiver program until "sufficient changes" to the US Refugee Admissions Program are made. 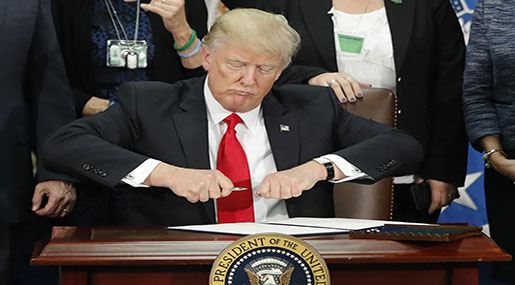 "I hereby proclaim that the entry of more than 50,000 refugees in fiscal year 2017 would be detrimental to the interests of the United States, and thus suspend any such entry until such time as I determine that additional admissions would be in the national interest," the executive order said, according to the text published by The New York Times.

The six other countries in question are: Iran, Iraq, Libya, Somalia, Sudan and Yemen, Reuters reported.

The executive order calls for a pause in visa applications for at least 120 days, or four months.

Eventually, refugee status will be granted to Syrians, but first priority will go to those who faced religious persecution. Trump signaled that Christians in Syria would potentially receive priority status in an interview with the Christian Broadcasting Network on Friday, according to Reuters.

"If you were a Muslim you could come in, but if you were a Christian, it was almost impossible and the reason that was so unfair, everybody was persecuted in all fairness, but they were chopping off the heads of everybody but more so the Christians," Trump said.

House Speaker Paul Ryan [R-Wisconsin] issued a supportive statement, saying, "Our number one responsibility is to protect the homeland. We are a compassionate nation, and I support the refugee resettlement program, but it's time to reevaluate and strengthen the visa vetting process."