A report that could be damaging to "Israeli" Prime Minister Benjamin Netanyahu given how he managed the 2014 war in Gaza is likely to be published in the coming days, after regime members of a Knesset subcommittee said they would vote on Tuesday to make the report public. 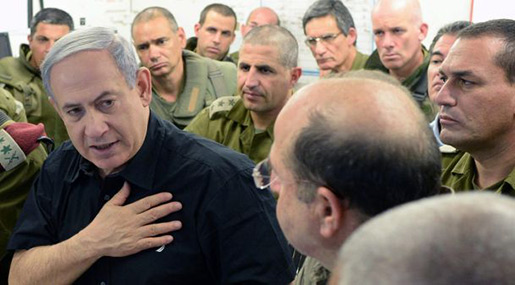 One of the critical sections of the report drafted by the comptroller deals with concerns that the security cabinet was not warned by the prime minister, the war minister or the "Israeli" Occupation Forces [IOF] chief of staff of the threat posed to the "Israeli" entity by Hamas' tunnel network ahead of the 55-day "Operation Protective Edge" in Gaza in the summer of 2014.

It is also believed that the report criticizes the same trio for failing to warn the security cabinet that the chance of war with Hamas was high, and for not providing sufficient information during the operation.

A public letter issued earlier this week by families of 55 soldiers who were killed during the war put pressure on the government to publish the document.

According to "Israeli" website The Jerusalem Post, Ben-Ari said she had not received any direct pressure against publishing the document.

However, she acknowledged, "the way things were going [it looked like] publication would be prevented, but when we got to the moment of truth, however, everyone understood that the professional issues were more important than the political ones".

The "Israeli" MK stressed on the importance to publish the document because it will have an impact on all "Israelis", saying that "At the end of the day, the security cabinet needs to know what's happening ahead of time and [to be able] to prepare for the next operation."

Ben-Ari said it was "the right of the public to know how the senior leadership of the state acts in such an important time," and that the report would be crucial in guiding the IOF and the security cabinet in conducting any future wars and operations in Gaza.

She also noted that the report is critical of the prime minister, the war minister and then-IOF chief of staff Benny Gantz, but would not be withheld based on the potential political impact the report might have.

Ben-Ari, together with Bitan and Shas MK Ya'acov Margi, are the coalition members on the subcommittee of the Knesset State Comptroller's committee, together with subcommittee chairwoman MK Karin Elharar [Yesh Atid] and MK Eyal Ben Reuven [Zionist Union].

It is not yet clear if the section on the security cabinet will be published immediately, or if publication will on the decisions made on whether to publicize two other sections of the report, which will be passed to the subcommittee later this week.

Ahead of Tuesday's vote, MKs from the entire political spectrum called on the committee members to vote in favor of exposing it to the public.

Yesh Atid chairman Yair Lapid, who was the "Israeli" entity's so-called finance minister and a cabinet member during the operation, said in the party faction meeting on Monday that political considerations should not guide the panel members.

"There are already attempts to prevent the publication of the report," Lapid said. "As someone who knows the details of it and testified in the comptroller's office more than once - this report should be revealed."

Lapid also addressed Netanyahu's concerns in opening the report to the public. "The Prime Minister's Office is afraid of the report because it shows severe failures."

Bennett also expressed his support of exposing the details of the report, but added that it should be taken as constructive criticism.

"We should not ignore the ‘Protective Edge' report but also [should] not make it a reason for [political] beheading," Bennett said on Monday. "We should learn from it in order to change our security world view from inclusive to defeating; from dragging it over 50 days to winning in five.

"Only exposing the details will provide us a way to move forward," Bennett added.

Zionist Union co-chairwoman Tzipi Livni, who served as so-called "justice" minister in the cabinet during "Operation Protective Edge", echoed the notion that the report should be revealed according to the wishes of the bereaved settler families.

"I was in the cabinet during the operation," she said. "But I wasn't among those who leaked [details of meetings] to the media, and I will not do so now from the opposition. But the families and the public have the right to know exactly what happened, in order to create a constructive discussion about it."