In the past few days the "Israelis" faced one of the worst brushfires in the Zionist history. Nearly a thousand hectares of forests and rural areas have been destroyed in the illegal settlements of Zichron Ya'acov, Neveh Shalom, Modi'in, Neveh Ilan and Nataf. Tens of thousands were evacuated from their illegal places in the Haifa area alone. 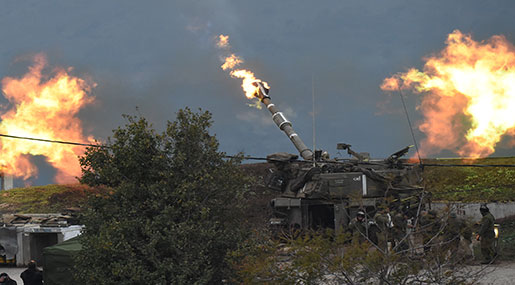 "Israel's" under-staffed firefighting forces were confronting day and night to stop the flames from spreading.

What were to happen if "Israel's" emergency teams were forced to deal with a large-scale brush fire while facing a missile offensive launched by Hizbullah from southern Lebanon?, the Jerusalem Post wonders.

According to the paper, this is not a far-fetched scenario. Depending on the season, a barrage of rockets and missiles landing in the occupied territories could easily spark a major brushfire bigger than the one that spread across the occupied lands over the past few days. If Katyusha rockets landed in dry brush after a long period of drought at a time of high winds, they could easily ignite huge fires.

The paper further claimed that "if Hizbullah were to launch a major rocket and missile offensive against "Israel", the "Israeli" response would likely be particularly devastating, not because "Israel" relishes destroying south Lebanon, but because the Hizbullah has purposely placed a large amount of its ballistic arsenal in civilian areas."

Speaking last week at The Jerusalem Post Diplomatic Conference in the occupied city of al-Quds, Brig.-Gen. Ram Yavne, head of the Zionist army's Strategic Division, warned that one-third of Hizbullah weapons are stashed in or under private homes in Shi'ite villages in southern Lebanon, the JP went on saying.

..."Israel" should prepare for a scenario in which it receives no help from the international community in extinguishing fires caused by Hizbullah rockets.

The fires of the last few days were a humbling reminder that, even under ideal diplomatic conditions, with "Israel" receiving support from abroad for its firefighting efforts, a large-scale fire can cause major damage.

"Israel" must begin preparing for a situation in which international aid is not forthcoming and firefighting efforts are being carried out in the midst of a rocket "offensive" launched by Hizbullah, the JP concluded.