Ordinarily in Yemen, it would be the thick plumes of black smoke that are indicative of the fact that something terrible has taken place - no matter what the location. But on this occasion, the dark curtain that obscures everything in sight is a welcome distraction; a murky drape that disguises something that even the most morbidly graphic of imaginations would have a hard time concocting. Severed, charred body parts are strewn about. 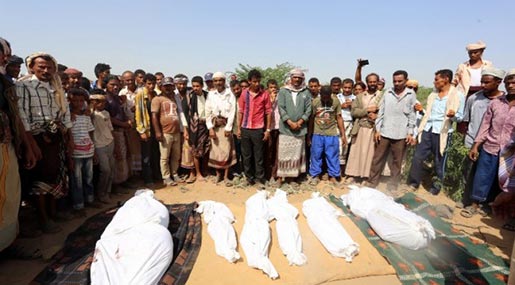 The grim sight is compounded by frequent, bloodcurdling screams - themselves a horrifying combination of disbelief, anguish, and rage punctuated by vows for revenge - just to name a few.

This was the scene at a funeral hall packed with thousands of mourners in Yemen's capital, Sana'a, on October 8.

According to the country's health officials, over 140 people were killed and more than 525 were injured. Saudi air raids targeted the community hall where mourners had gathered to pay their last respects to the late father of Yemen's interior minister, Jalal al-Rowaishan.

But Sana'a-based journalist Mohammad al-Attab says that the death toll is likely to rise.

"The hall is one of the biggest in Yemen. It has the capacity of over 4,000 and there were a lot of people attending the funeral. When I went to the hospitals after the attack, I saw a lot of injured people, many of them in critical condition," al-Attab explained.

Described as one of the most lethal incidents since the start of the Saudi-led military campaign in March of last year, the attack caused outrage in a country already accustomed to Saudi-perpetrated massacres.

Al-Attab described the aftermath of the bombing as a "pool of blood".

"When you enter the hall you can see flesh, blood and concrete mixed together. People's bodies were shredded all over the place. It is really something very difficult to even imagine. Also the smell is unbearable because the Saudis use missiles that burn people alive," al-Attab said.

Saturday's attack was quickly followed by a wave of ‘condemnation'.

The UN humanitarian coordinator in Yemen, Jamie McGoldrick, condemned the "horrific attack", adding that the humanitarian community was "shocked and outraged" by the airstrike.

However, the co-founder of one of the very last NGOs still operating in war-torn Yemen describes the attack as a "legal genocide approved by the UN."

Dr. Riaz Karim, who co-founded the Yemen Organization for Humanitarian Relief and Development [MONA], says, "the rest of the world suffers from the ‘Ostrich Syndrome'. They have buried their heads in the sand hoping it will go away. Yemen is not the forgotten war of the decade; Yemen is the unspoken shame of our generation".

Since the start of the conflict, more than 10,000 people, including 2,236 children have been killed, according to modest estimates. The Saudi-led coalition's air campaign has devastated Yemen's infrastructure, destroying hospitals, schools and factories, leaving over 80% of the population in need of humanitarian assistance.

The Sana'a-based executive director of the Horn of Africa Center for Strategic & International Studies, Bischara Ali, believes that Riyadh's war on Yemen enjoys, "full impunity from the so-called UN/HR/MSM and the entire western world".

But the airstrikes on Sana'a, which come less than three weeks after the US Senate approved a US$1.15 billion arms deal with Saudi Arabia, apparently provoked a reaction from the White House.

"We have initiated an immediate review of our already significantly reduced support to the Saudi-led coalition and are prepared to adjust our support so as to better align with US principles, values and interests, including achieving an immediate and durable end to Yemen's tragic conflict," White House National Security Council spokesman Ned Price said in a statement.

Washington, a major arms supplier to Saudi Arabia, is reportedly attempting to distance itself from Saturday's devastating bombing, warning Riyadh that US-Saudi security cooperation was "not a blank check."

For Saudi dissident and director of the Washington-based Institute for Gulf Affairs, Ali Al-Ahmed, the Obama Administration's supposed condemnation is "nothing new".

"There are dozens of American officers inside the Saudi Ministry of Defense Aerial Command and Control Center, that tell the planes what to bomb. Those American officers, who are located six levels below ground at the Saudi air force command base, have a direct line of communication to the US military central command in Florida, which they use to receive information. The Americans continue to be part of the military operation [in Yemen]. It's very typical of American officials to talk about how horrible they feel about this or that, but this is not about how they feel. This is about the people who have died because of their policy. If the Obama Administration wanted this war to stop, Obama would have called [King] Salam and said ‘stop this war'. It's very clear that the American administration is lying here, trying to weather the storm," Al-Ahmed says.

Footage emerging after the attack, along with eyewitness accounts, demonstrates that the Saudis had once again resorted to using the so-called ‘double-tap' strike strategy, which involves repeated air strikes that target civilians and rescuers responding to an earlier bombing raid at the same location.

Rima Kamal, who works with the International Committee of the Red Cross [ICRC], confirmed that "several air strikes" had hit the venue.

A number of senior intelligence and military officials were reportedly attending the funeral precession at the time of the attack. Sana'a mayor Abdul-Qader Hilal was confirmed to have been killed, while the commander of the Yemeni Republican Guard and the commander of the security forces in Sana'a are also believed to be among the dead.

The list of killed VIPs has led some to conclude that the attack was in fact a "targeted assassination."

"This was an intentional attack against top Yemeni government officials, and the double-tap proves it. They [the Saudis] knew who was going to be there and that's why they targeted the funeral," Ali Al-Ahmed alleges.

But others believe Saudi Arabia's motives are more sinister.

According to pro-Ansarullah activist, Hussain Al Bukhaiti, "the Saudis knew where all of the people who were at the funeral reside and they track all of their movements. If they really wanted to target them, why didn't they target them alone?"

Al Bukhaiti points to similar attacks carried out by the Saudi-led coalition, which have killed an extraordinarily high number of civilians, even though no officials were in attendance.

"In my city of Dammar, the Saudis killed and injured over 120 people when they targeted a wedding on October 8 of last year. There were no high-ranking officials present. There is nothing different about this attack," Al Bukhaiti says.

The Sana'a attack comes at a time when Riyadh is grappling with an economic crisis, growing political instability at home and territorial losses resulting from Houthi advances in the kingdom's southern provinces.

Yemeni-born journalist, Yousef Mawry, who fled Sana'a last year, thinks that the timing of the attack is significant.

"Saudi Arabia realizes their demise is close at hand. They are killing innocents indiscriminately because they are simply in a state of confusion. They've already lost the war and now they are beginning to realize their entire regime is at stake," Mawry opines.

Al Bukhaiti shares this point of view, warning that the Saudis are currently engaged in a campaign of collective punishment against the Yemeni nation.