Russian and Syrian aircraft did not carry out any airstrikes against a UN humanitarian aid convoy near the city of Aleppo, Russian Defense Ministry spokesman Maj. Gen. Igor Konashenkov said Tuesday. 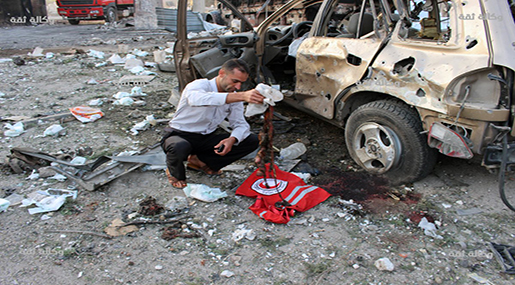 On Monday, the United Nations' Office for the Coordination of Humanitarian Affairs [OCHA] said that the aid convoy crossed the conflict line in the Big Orem area of the Syrian city of Aleppo. Later in the day, UN officials stated that the convoy had been shelled and there were casualties.

"No airstrikes were carried out against a humanitarian aid convoy in a southwestern suburb of Aleppo by Russian or Syrian aviation. Seeing as the convoy's route lied through the territories controlled by the militants, the Russian reconciliation center accompanied it yesterday via drones," Konashenkov said.

According to the official, the monitoring finished when all humanitarian aid was delivered at around 10:40 GMT.
"Further movements of the convoy were not monitored by the Russian side. Only the militants controlling this area know details on convoy's location," Konashenkov added.

In a related notion, Russia affirmed its military was looking into "information" about an air strike on a UN aid convoy in Syria after the government announced an end to a week-long ceasefire.

"I don't think it is possible or correct to make any unsubstantiated conclusions," Kremlin spokesman Dmitry Peskov said.

"Our military is currently verifying information about this strike and I hope they will receive concrete information from the ground and can then release a statement."

The UN said at least 18 trucks in a 31-vehicle convoy were destroyed late Monday as they were en route to deliver humanitarian assistance to the hard-to-reach town of Orum al-Kubra, killing a Red Crescent staff member and civilians.

The United Nations has since suspended all humanitarian aid convoys for security reasons.

Peskov said that hope for a renewal of the ceasefire was "for now, very weak", stressing that a truce could only be resumed if "terrorists" halted their alleged bombardments of government forces.

"The conditions are very simple. The shooting needs to stop and the terrorists need to stop attacking Syrian troops," he said.

"And, of course, it wouldn't hurt if our American colleagues didn't accidentally bomb the Syrians," he added, referring to a US-led coalition strike last week that Moscow said had killed at least 62 Syrian servicemen.

Russia and the United States had persistently blamed each other for not doing enough to fulfill the deal.

Moscow insists that Syrian troops had fully respected the truce -- which was meant to end hostilities and ensure aid deliveries -- but that the Takfiri militants had kept up their bombardments.

Russia's defense ministry said Monday that the week-long truce had been violated 302 times and that 63 civilians had been martyred.