A group of journalists from a number of Lebanese media outlets spoke with the deputy secretary-general of the Lebanese resistance movement Hizbullah, Sheikh Naim Qassem. 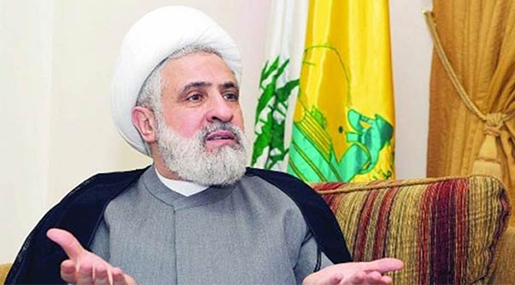 During the interview, Sheikh Qassem touched on Lebanon's domestic political scene, which continues to be crippled by a presidential vacuum. He also addressed the latest developments in neighboring Syria.

The interview began with Sheikh Qassem's overview of Hizbullah's position dating back to the start of the Syrian conflict. He explained that the resistance movement believed that there was a conspiracy being plotted against Syria, with the aim of changing the pro-resistance government and replacing it with a regime willing to coexist with "Israel". According to the Hizbullah deputy, some looked upon the events unfolding in Syria, as reforms within the country.

"We find that more than eighty countries sent their fighter to Syria while others provided all the necessary military facilities including arming, equipping, and training troops. So armies from all over the world converged on Syria under the banner of reform. The world has never witnessed this kind and pattern of targeting," Sheikh Qassem said during the interview.

He added that Hizbullah's entry into the fight was "two years late", and came only when the resistance group sensed the danger coming towards the Lebanese border.

According to Sheikh Qassem, attempts to target the resistance through the Syrian crisis followed the failure of the "New Middle East" project - first revealed by former US Secretary of State, Condoleezza Rice, during the "Israeli" war against Lebanon in July 2006.

When asked about the magnitude of the sacrifices made by Hizbullah, His Eminence warned that the movement was willing to pay an even higher price. He said that despite the thus far tragic looses, Hezbollah was prepared for even bigger sacrifices if the Takfiris tried to capture Qalamoun or any other area in the hope of declaring their so-called emirate.

Sheikh Qassem praised the efforts of the Lebanese security forces and the country's General Security agency, in maintaining the safety of citizens. He said that with the help of the resistance, security services are conducting thorough follow-ups on terrorist networks, individuals, and sleeper cells.

With respect to the Lebanese dossier, Sheikh Qassem described "General Michel Aoun" - Hizbullah's presidential candidate - as the "worthiest" for many reasons. He pointed out Aoun's clearly stated positions, an anti-corruption project as well as the support he enjoys among Lebanon's Christian community.

"If this view was not correct, former Prime Minister Saad Al Hariri would not have started a dialogue over the presidency with General Aoun two years ago. The dialogue was hindered and stopped by a Saudi decision rejecting Aoun as a candidate," Sheikh Qassem said.

More than two months ago the Future movement made another attempt. There was an agreement over a number of issues, and the presidential elections were scheduled for August 7. However, the attempt was also "sabotaged by Saudi Arabia".

In moving on to the US-Russian agreement over Syria, Qassem explained that the deal was prepared nearly two months ago before the Castello and Al Mallah battles (the US wanted this agreement for one basic objective: to curb the Syrian army's movement in Aleppo and prevent it from achieving victory or deal a severe blow to the militants). But the continuation of the battles disconnected the city from the countryside. Currently, besieging Aleppo is the Syrian government's objective. Meanwhile, the Americans fear a militant surrender and a withdrawal from Aleppo, if the siege stretches on. However, there are no signs that a solution is forthcoming in Syria until the conclusion of the US presidential elections; that is when a political solution will be reached.

Sheikh Qassem confirmed that the only solution to the Syrian crisis is one chosen by the Syrian people and the global axis that they choose to belong to.

According to Qassem, the "very relaxed" Hizbullah studies all the developments and events that surrounds it, on both the Lebanese and regional arenas. The movement does not owe anyone anything. Every side must bear its responsibilities and the liability of its positions.

The deputy secretary-general stated that the members and leaders of Hizbullah have been patient and persistent since the founding of the movement in 1982. Even though many objected to the resistance, the group was able to achieve victory in 2000 and 2006. And despite international pressure, the work of the resistance continues.

Sheikh Naim Qassem concluded by saying "there is no place for the Takfiris among us... how they started and where they are now! They have no future. They will try to launch suicide attacks wherever they are ... But they will remain groups with no place among us."