The post-coup attempt reality in Turkey has given rise to an Erdogan unchained, with no obligations to adhere to previous agreements with any of his allies and foes, be they domestic or international. 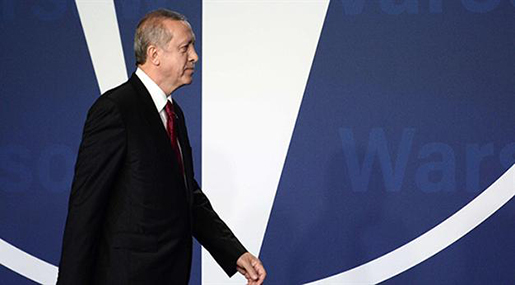 The Turkish President can be called a lot of things. Most of them are far too inappropriate to be spelled out here, but few leaders in the world can take pride in having been rescued from an attempted coup by people power.

And Recep Tayyip Erdogan is eager to capitalize.

The ensuing purge has led to the detention or suspension of around 50,000 soldiers, police officers, judges, civil servants, and teachers. Another 99 military generals have been charged with treason.

Are all of these people involved in a sloppy attempt to overthrow the government in Ankara? Probably not, but very few are innocent of sympathizing with what has long been known as Turkey's deep state, more specifically the Hizmet movement led by US-based cleric Fethullah Gulen.

"Erdogan started a huge fight against the Gulen movement and this fight has now taken the form of an armed conflict," says the deputy director of Turkey's Patriotic Party, Yunus Soner.

For this fight, Turkey's president needs to be firmly in control of his country - or at the very least, he must appear to be. A cleansing campaign of the military and numerous social institutions, peppered with talk of bringing back the death penalty, certainly goes a long way in doing exactly that.

But how well does Erdogan actually sleep at night?

"I doubt that Erdogan has that much power right now, because if you face the Gulen organization and if you declare that the US is responsible for the coup attempt in Turkey, then you have a huge enemy," opines Soner.

Erdogan undoubtedly enjoys the support of a sizable portion of the Turkish population. This statement needs little explanation for anyone who has visited Turkey during the nearly two-decade-long rule of Erdogan's Justice and Development Party (AKP), which paved the way for economic prosperity and stability, with the exception of the party's foreign policy blunders in recent years.

What's more, the country's High Military Council did not abandon Erdogan in his hour of need, and as Turkey's latest coup attempt unfolded on July 15, opposition parties also threw their weight behind the government.

But that is not to say that Erdogan does not have enemies. And some of those enemies have very powerful friends indeed.

Fethullah Gulen originally started out following the teachings of a Kurdish-Sunni Muslim theologian, Said Nursi, before morphing into a cult leader whose present-day followers believe he is the Mehdi (the prophesized redeemer of Islam).

During the 1980s, members of the cult began infiltrating Turkey's government institutions, including the security services, judiciary and education ministry.

Presenting themselves as a symbol of moderate Islam, the Gulenists distinguished their crusade from other so-called "Islamist" movements by adopting a pro-US/"Israeli" stance.

Over the years, the movement became a multi-billion-dollar empire, exerting global influence and charting ‘educational' institutions across 140 countries.

Fethullah Gulen himself is a darling of US Democratic presidential candidate Hillary Clinton, as well as a major contributor to her many political campaigns over the years and family business - the Clinton Foundation. Just last month, documents surfaced linking Clinton's lobbying efforts in the US Senate with organizations close to Gulen.

Shielded under the umbrella of American intelligence agencies for decades, Gulen rejected all accusations that he was behind the coup attempt in a rare interview with a small group of journalists at his residence in Saylorsburg, Pennsylvania.

But in Ankara, the gloves have come off.

Gulen's chummy relationship with Washington did not just fail to prevent Ankara from blaming the cleric for the attempted coup and demanding his extradition, but also led to direct accusations of US involvement in the armed rebellion.

According to Soner, "it is not so much an internal conflict going on in Turkey as an open conflict with the US."

In the immediate aftermath of the upheaval, the Turkish government zeroed in on the Incirlik Air Base in southern Turkey, which also happens to store the largest NATO nuclear arsenal that is guarded by tens of thousands of American and Turkish soldiers.

Turkey's Incirlik commander, whose job consisted of daily consultations with the US military establishment, was arrested for allowing the base to be used for refueling planes deployed during the foiled coup attempt.

Whether we believe that the Americans are behind the coup, or that Erdogan orchestrated the whole affair himself before rounding up the perpetrators and executing them, is surprisingly irrelevant when looking ahead.

Regardless of whether this was - as some have suggested - another one of Erdogan's false flag operations, the implications are most certainly going to be very real.

What the coup attempt does expose is Erdogan's conscious effort to divorce the Euro-Atlantic system.

"There is a revolution going on here. And this revolution is at least regional, if not global. Turkey is slowly leaving the Atlantic system. That is the reason behind this coup. That is the reason why NATO is panicking. This is much broader and much bigger than Erdogan. This is a tectonic movement. This will affect Turkish-Syrian relations, Turkish-Chinese relations, Turkish-Russian relations and Turkish-Iranian relations. This will change the world," explains Soner.

In recent weeks - especially since Erdogan apologized for downing the Russian jet bombing Daesh [Arabic acronym for "ISIS" / "ISIL"] over Syria - there is a great deal of speculation over a geopolitical alliance between Ankara and Moscow. In order to approach this project realistically, the Euro-Atlantic elements must first be eliminated in Turkish politics and its security apparatus.

The current political realities on the ground, which are allowing Erdogan to ignore previous agreements with ‘allies' have created an ideal situation for Turkey's shift eastwards.

What is also clear is that Erdogan, who ‘survived' a military coup, is intentionally hoping to be put in the same basket as Syrian President Bashar al Assad in at least proving that resistance to western pressure is possible.

In this regard, Erdogan has managed to do what European leaders can only dream of - freeing himself from Washington's grip.

To what degree Erdogan takes advantage of this newfound honor remains to be seen. By most accounts, the Turkish president is simply attempting to flee a sinking ship and years of failed policies that have brought his country to the brink and destroyed so many others in the region.

Whatever happens, the Ankara emerging from this failed coup will be one that's a lot less hostile toward Moscow - and more importantly toward its neighbors.