Turkish officials say that nearly 8,000 police officers have been suspended, reportedly on suspicion of having links to the failed coup attempt at the weekend. 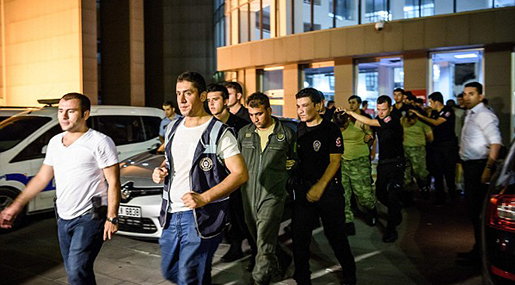 Some 6,000 members of the judiciary and military, including generals, have been detained in connection with the coup.

President Recep Tayyip Erdogan vowed to purge state bodies of the "virus" that caused the revolt.

The Turkish government claims cleric Fethullah Gulen was behind the plot.

Gulen lives in the United States and strongly denies any involvement.

Eight Turkish military officers who fled to Greece by helicopter are appearing in court in the Greek border city of Alexandropouli charged with entering the country illegally.

President Erdogan told a crowd on Sunday that Turkey would consider reinstating the death penalty.

Capital punishment was abolished in 2004 as part of Turkey's bid to join the European Union. Nobody has been executed in the country since 1984.

The EU's foreign policy chief, Federica Mogherini, was speaking ahead of a meeting of EU foreign ministers and the US Secretary of State, John Kerry, in Brussels, at which the events in Turkey are likely to be high on the agenda.

She said there would be no excuse for any steps that would take Turkey away from the rule of law and that the foreign ministers would be sending a "strong message" on that.