Palestinians in the Gaza Strip expressed anger and dismay on Monday about the deal normalizing relations between the "Israeli" apartheid entity and Turkey that leaves them under a suffocating siege. 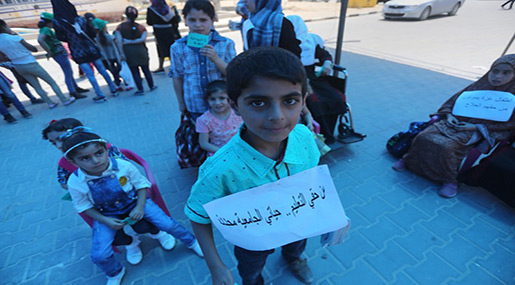 An "Israeli" group that monitors the decade-old "Israeli" blockade of Gaza has also confirmed that the deal does not end the entity's tight control over the territory that has greatly exacerbated the devastation to Gaza's economy and society from three major "Israeli" military assaults since 2008.

Turkey put its once close military and political relations with the "Israeli" apartheid entity in the deep freeze six years ago, after the entity attacked the Turkish-owned Mavi Marmara as it sailed in international waters as part of a flotilla to Gaza in May 2010, killing nine people and fatally injuring a tenth.

Turkey imposed unprecedented military sanctions on the "Israeli" entity in 2011 over the incident.

Efforts at reconciliation had been stalemated by the conditions demanded by Turkish President Recep Tayyip Erdogan: an "Israeli" apology and compensation over the Mavi Marmara attack and an end to the siege of Gaza.

The breakthrough apparently came when Turkey dropped the third and biggest of these demands and accepted that the "Israeli" entity would maintain its blockade.

In a face-saving measure, the apartheid entity will allow Turkey to increase its "humanitarian" role and infrastructure projects in the besieged territory.

In a related notion, one Palestinian Authority official calling the deal a political trick by which Ankara and Tel Aviv were using Gaza to serve their interests.

"The Turkish president wanted to get Ankara out of its international isolation, which was caused by his policies," the daily Jerusalem Post quoted what it described as a senior Palestinian official as saying.

"It was sad to see him [Turkish President Recep Tayyip Erdogan] chase after ‘Israel' in order to secure a weak deal," the unnamed Palestinian Authority official added.

The source further added that the deal "will turn out to be a political trick in which Erdogan is using the Gaza Strip."