Hizbullah Secretary General His Eminence Sayyed Hassan Nasrallah delivered a speech in which he tackled number of regional and domestic files. 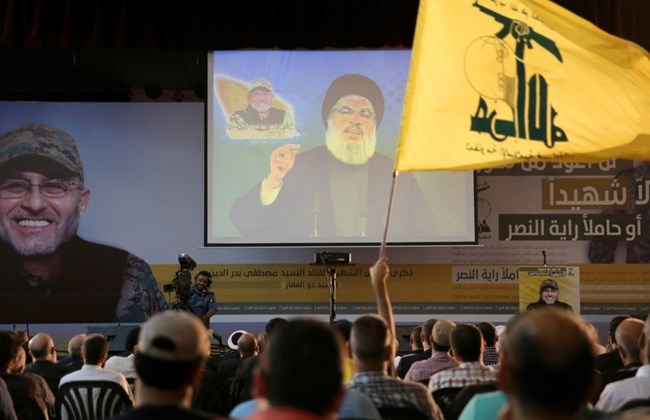 Badreddine Commemorating 40 days on the martyrdom of the martyr Leader Sayyed Mustafa Badreddine, Sayyed Nasrallah reiterated his congratulations and condolences to the Leader martyr's family and companions.

He further reaffirmed that Hizbullah does not abandon its prisoners at jails and behind bars. "Sayyed Badreddine played a key role in the release of our captives from "Israeli" prisons."

Announcing that Hizbullah will commemorate al-Quds international Day next Friday, His Eminence highlighted that the Resistance lost a major commander, a creative mind and a firm leader, who wasn't to be shaken.

"He wasn't to bend no matter the storms and calamities."

As he hailed the late martyr Leader's traits, Sayyed Nasrallah unveiled that martyr Badreddine led Hizbullah's negotiating team which released martyr Samir Quntar and other prisoners from the Zionist jails

"Sayyed Badreddine was the commander of Hizbullah's jihadi file in Syria and Iraq," he added, pointing out that "when Daesh controlled areas in Iraq and the situation has become very difficult, brothers in Iraq contacted us and said that they need a certain number of cadres and leaders to transfer their experiences and plans."

Moreover, His Eminence uncovered that he has contacted Sayyed Badr al-Din and told him that "the brothers in Iraq need some cadres and leaders and within hours the required number of brothers was ready to go to Baghdad, and this work is not easy to do during hours."

"Sayyed Zulfikar was determined to fight the takfiri terrorism in Damascus, Homs and Aleppo since the inception of the crisis and contributed to the victories there," he mentioned.

The Resistance Leader moved on to say: "After they failed to reach Damascus from Lebanon, Jordan and the eastern front, Saudi Arabia and Turkey have dispatched thousands of militants in a bid to launch an offensive from the northern front."

Sayyed Nasrallah affirmed that "He [Martyr Leader Badreddine] knew the scope of the situation in Syria, and he knew the aims behind this scheme. But he went to fight and refused any kind of political movement and he saw an opportunity for victory at that time when all the countries TV networks and analysts and even Syria's allies predicted that the situation in Syria will only take a few months."

Regarding the recent battle in Aleppo, he slammed all those who talk that Hizbullah received a blow in Aleppo. "They invented the lie and marketed it," His Eminence viewed.

"A new war on Syria in being launched from the northern front, especially from Aleppo, and to defend Aleppo is to defend Damascus, Lebanon, Iraq and Jordan," he said.

Sayyed Nasrallah further uncovered that "there are 26 Hizbullah martyrs, one prisoner and another is missing since the 1st of June in Aleppo. In a battle like this you would expect more martyrs than that."

In addition, he warned that the US-Saudi-takfiri scheme is seeking to make an achievement in Syria through Aleppo's front.

"It is our duty to increase our presence in Aleppo... because the real, strategic and greatest battle is in Aleppo and the surrounding area," the Resistance Leader said.

On the losses of the terrorist armed groups, His Eminence highlighted that "From June 1 to June 24, the armed groups lost 617 militants, including dozens of field commanders and some senior leaders. More of 800 militants were wounded while over 80 APCs, tanks and vehicles were destroyed without mentioning the military stores and sites."

"Turkey and Saudi Arabia, which have brought thousands of militants to Syria in the past months, have failed in their plan to topple the Syrian government," he added.

Letter to The Mujahedeen

To the Mujahedeen, Sayyed Nasrallah sent a message of honor: "You are the honest in your promise to God. You are the custodians on the destiny and the future of the resistance. You are the reality of the Husseini love, which drives you from all of Lebanon to go and defend your country. We trust in God and you are to topple the American, "Israeli", and takfiri schemes. You were behind the 2006 historical miracle in the region, and you will frustrate the plots of hegemony, sedition and atonement in the region."

On the Iraqi front, Sayyed Nasrallah confirmed that the Iraqis who are fighting in Fallujah, Anbar and Mosul are defending the whole region and the nation. "And we thank our fellow Sunni religious scholars and Sunni leaders who covered and followed the operation in Fallujah."

US Sanctions and some of Stupidity

Moving to the Lebanese internal arena, Hizbullah Secretary General reiterated the party's categorical rejection of the US sanctions law, describing the claims that Hizbullah is collapsing financially as "childish dreams."

On this level, he added: "There is a childish act, stupidity and nastiness in some Lebanese and Arab media, who claims that Hizbullah is in financial crisis."

"I have already said even the strictest implementation of the US law will not affect Hizbullah as an organizational and jihadi party," he stressed, assuring that "we do not have business projects or investment institutions that benefit from banks. We openly say that Hizbullah's budget and funds come directly from the Islamic Republic of Iran and as long as Iran has money we will have money. Hizbullah gets its money and arms from Iran, as long as Iran has money, so does Hizbullah."

Moreover, Sayyed Nasrallah said: "We extend gratitude to the Leader Imam, [His Eminence] Sayyed Khamenei, and to the leadership of the Islamic Republic and its government, president, scholars and people for their generous support which has never stopped."

In parallel, His Eminence vowed that "all the world banks can not impede the arrival of money to us and when the sanctions were implemented, our money reached us."

"There existed some Lebanese who went to Washington and instigated this file and there are enemies who called for the issuance of the US law," he stated, elaborating that "there are banks in Lebanon that went too far and implemented measures that were not even requested by the Americans themselves. They removed the accounts of charitable associations whose names were not mentioned in the US blacklist."

He also wondered: "Is this a legal and humanitarian behavior or is it an attack on people and on the charitable associations? "

"There are some banks, that if a person is related to a Hizbullah member, they will close their accounts. This is an attack on our people and we reject this attack, and we will not allow it. Whoever says they care about the financial sector, they shouldn't target a third of the population," His Eminence underscored.

Meanwhile, Sayyed Nasrallah warned that the assault on a large segment of the Lebanese people is to destroy the Lebanese economy and the banking system in Lebanon.

Commenting on the celebratory gunfire issue, he announced the decision to dismiss any member of the party who engages in what he said was a "disgraceful and dangerous" act.

"Even if he was with the party for 30 years, even if he fought the "Israelis", he will be dismissed."

Moving to the Bahraini front, he slammed the recent Bahraini decision to strip the citizenship of Ayatollah Sheikh Issa Qassem.

"Revoking the citizenship of His Eminence Sheikh Issa Qassem, this noble and courageous cleric- who have endured over the past years a historic responsibility, is very dangerous," Sayyed Nasrallah cautioned.

According to His Eminence "Sheikh Issa Qassem, with the leaders of the Bahraini opposition, was able to contain the Bahraini street and distance them away from using violence throughout the years."

He criticized the leadership in Manama, saying that they only take orders from Saudi Arabia, which is scared the revolution is going to spread to their territory.

"There is no decision for the al-Khalifa family in Bahrain. They only enforce the orders of the al-Saud family who prevent any dialogue and reforms because the Bahrain example will reach them if it is successful."

Moreover, he confirmed that "the demands raised by the peaceful movement of the Bahraini people are rightful. They neither used violence nor carried weapons. However, they, their women, and youths were assaulted and their clerics were prisoned."