The "Israeli" apartheid regime's troops completely withdraw from South Lebanon by May 25th, 2000. Sixteen years on the liberation and the Lebanese still cherish this day stronger than ever. 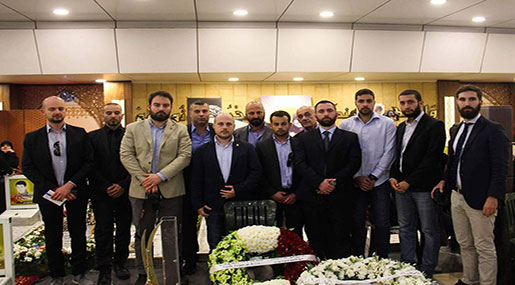 This year, it is not only the Lebanese who celebrated the 16th anniversary of the Resistance and Liberation Day, an Italian delegation that visited Lebanon to show solidarity with Hizbullah had a lot to say to national, regional and international public.

The Italian delegation consisted of 11 activists and public figures from Italy and Spain among which were Alberto Palladino, an Italian journalist and executive board member of Solidarite Identites, a humanitarian organization to support the Syrian people, as well as Italian politician Giovanni Feola, leader of the Italian CasaPound movement. 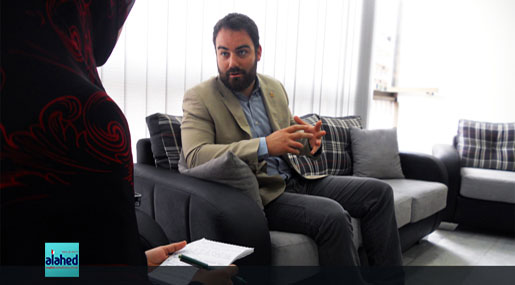 Palladino indicated that the Resistance's May victory is very important and that it is a "symbolic victory because in this time no one can invade another sovereign nation; all the people in the Mediterranean zone, every free people have the right to defend their homes from invasion..."

He went on to sya that "The victory of Hizbullah against "Israel" is the symbol of a new freedom in the Mediterranean zone. On another level, it is a very great victory because a powerful and very well-equipped army was defeated by the pure resistances of Hizbullah revolutionaries."

According to the Italian delegation's deputy speaker, it is via their organization's work in Syria that they met Hizbullah and founded a relationship with the group.

He indicated that the Italian delegation intends to "create or rebuild the relation between Europe - specially the countries that are in contact with the Mediterranean Sea - and the close east; that is, the Middle Eastern countries on the Mediterranean Sea" pointing out that through "analyzing our similitudes, we find that we are very close in culture and history as well as political views".

Palladion explained that the main example of likeness between the European and Middle Eastern countries in the Mediterranean zone is the fight against terrorism saying that "terrorists have engulfed Syria as it did in Paris and Brussels; so we have to be close as much as possible to solve it".

When asked about the concerns over the wave of terrorism that has extended from the Middle East to Europe and the delegation's expectations from their visit, the deputy speaker said, "We aim to launch a signal through this activity to have the Europeans understand that there is an alternative to the official relation between Europe and Arab countries".

"Take Saudi Arabia for example, our government and politicians have diplomatic ties with it; Saudi Arabia is killing the Yemeni people and no one in the West spoke out" Palladino said.

He added that "everyone in Europe considers Hizbullah as a terrorist organization, but no one speaks of the situation in Yemen where our military planes are sold to Saudi Arabia and are used to kill the Yemenis."

On the level of Hizbullah's fight against terrorism in Syria, Palladion said that the group "gives the best example it can give to the world" shedding light on the fact that "now Hizbullah and its martyrs are the best answer against terrorism."

"It is not a terrorist organization! Hizbullah is fighting outside its territory and spending weapons, money and lives to defend the freedom and security of Syria and the Syrian people," he added.

He indicated that "now, people in Italy are getting their information directly from the source - your website for example - via the internet, and they no longer depend on the official media for news", explaining that Europeans are becoming more aware of the truth and their view Hizbullah. 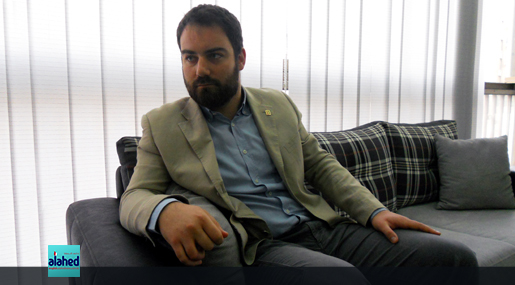 Regarding the intelligence and media reports that dealt with the role of the US and its regional allies in the rise of Daesh [Arabic acronym for "ISIS"/ "ISIL"], Palladino pointed out to a "crime organization behind the fake information used".

He explained that "in the first two years of the war in Syria, the mainstream media alleged that the ‘rebels' in Syria are people calling for freedom and democracy... however, in their independent channels, we saw that these ‘rebels' killed and cut off the heads of their prisoners in front of the camera. They do not want democracy; they want to spread an extreme version of Islam which is not the true face of Islam represented by Hizbullah or Iran."

Palladino believed that the "US supports this kind of Islam - Wahhabism - because it wants to impose sectarianism which makes it easier for the US to control Arab countries; "Israel" is the historical proof of this project. That's why they sponsor this kind of view to produce this project."

The Italian delegation's deputy speaker stated that "In Europe, there is a sort of split in political point of view between the public and the government. The public calling for aiding the Syrians and the groups fighting against terrorism while politicians continue to say that the war in Syria is a mere ‘democratic rebellion'."

He further explained that European governments are making sure they maintain a good relation with the US and its rich Arab allies in the light of the ongoing economic crisis in Europe.

According to Palladino, this situation is a "slave vision", in other words modern-day-slavery: "you stick to someone because they have the money and resources even though you know they are funding and supporting terrorism. Iran on the other hand, also has resources and money but it is fighting against terrorism."

"The situation is more or less similar to that of Russia," Palladino indicated. "Europeans broke ties with Russia and imposed economic sanctions on it due to Putin's intervention in Syria... It is a crazy situation, now we have no money in Europe and governments still managed to impose sanctions on Russia losing billions just by breaking this commercial relation."

Palladino points out that "the time has come for the Italian government to find a new approach in dealing with its US alliance."

Moving on to the issue of the Syrian crisis, Palladino agrees that "Syrian President Bashar al-Assad is the only guaranty against terrorism and the real freedom in Syria" shedding light on the popular view among Syrians of all religious sects.

He added that "if Assad falls, Syria will be destroyed by the Takfiri Wahhabi groups", noting that "Assad must stay in office and the Syrians should decide for themselves dependent of any US influence."

Concerning the official position of the Italian government, Palladino explained that "Italy abides by the course of the international coalition fighting against terrorism but at the same time the removal of Assad; our government should support Assad - the real government in Syria", remarking that "terrorism in Syria will not stop at the Mediterranean boarder, but it will spread out."

The Palestinians had a share of what the Italian delegation had to say. Palladino quoted Syria's mufti as saying that "if all these fighters coming from everywhere to fight in Syria fought for the freedom of occupied Palestine, they would have freed it by now!"

He went on to say that "The enemy is the oppressor; it is the imperialist. We must carry on our fight - the holy battle. We have to return this land to the Palestinians and rid it of the apartheid ‘Israeli' aggression."

"To the Lebanese and Palestinians, you have to decide for yourselves," Palladino concluded.