The "guests" are issued key cards for their rooms, receive three catered meals per day and sleep in luxury suites outfitted with big-screen TVs, king-size beds and shiny wallpaper. 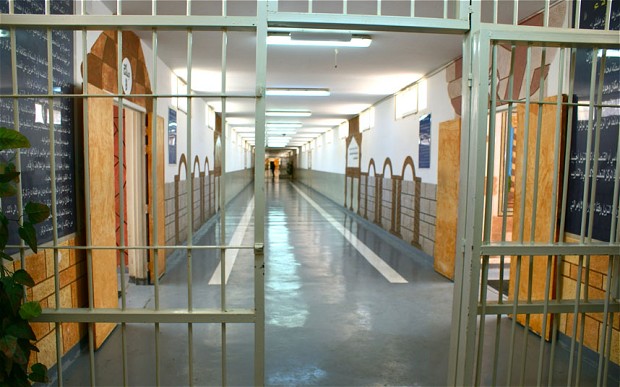 They call it the Family House, and it feels like a boutique hotel, if you can overlook the lack of windows, the towering walls outside and the location - inside one of Saudi Arabia's high-security prisons for "jihadists."

The house is designed to give "jihadists" who behave well a respite from inmate life and help them reconnect with their wives and children...

That positive reinforcement is emblematic of the Saudi approach to its homegrown "jihadists," which would not translate well to the West. Those who have done their misdeeds abroad and have not participated in attacks at home are generally regarded as misled Saudi sons who need to have their thinking corrected so they can return to society as good, obedient subjects.
That philosophy was clear during a recent tour of al-Ha'ir Prison south of Riyadh, one of Saudi Arabia's five facilities holding its more than 5,000 inmates charged with terrorism-related offenses.

"Here we have all the types of terrorism that you have in the kingdom," said a guide, a portly, mustachioed assistant prison director who gave only a nickname, Abu Nawaf, for security reasons.

"Prison is not just to punish a person and then let him out," he said. "That's a danger to him and to society. If he gets out and is good with himself, his family and society, that is better."

The effectiveness of that approach - which the Saudis argue is preferable to, say, sending inmates to Guantánamo Bay, Cuba - is hotly debated and probably will be for some time, as independent assessments are rare.
Saudi officials say recidivism is low, but Abu Nawaf could provide no statistics. And the International Committee of the Red Cross has no presence in Saudi Arabia, so it cannot monitor prison conditions.

Western human rights groups, rarely allowed inside the kingdom, say conditions are believed to be better in high-security facilities than in regular criminal prisons, where allegations of mistreatment and overcrowding are more common.

The imposing and unmarked facility sits on the edge of the desert, ringed by two high walls interrupted by well-guarded gates. More than 1,700 inmates - all men - reside in wards that are connected by bright white corridors. The iron gates, doors and guard booths are purple.

All inmates get certain benefits, Abu Nawaf said, like a monthly stipend equivalent to $400 for incidentals and the possibility of "temporary release" for family functions. An inmate heading to a relative's wedding, for example, gets $2,666 so he can give a gift.

Large rooms with couches and tables are provided for family visits, and inmates who are not considered dangerous also receive "special visits" from their spouses in small rooms with pink walls, pink beds, a minibar [no alcohol, of course] and a bathroom.

Each wife can visit once a month, resulting in a polygamy benefit for men with more than one spouse.

"Those with four wives get one visit each week," Abu Nawaf said... Even inmates on death row are allowed these special visits.

Nearby is the local branch of the Prince Mohammed bin Nayef Center for Advice and Care, a reform program staffed by psychologists and religious officials who try to de-radicalize inmates by teaching them what Nasser al-Ajmi, a psychologist with the center, called "correct Shariah thought."

Newly arrived inmates are assessed by a psychologist to identify social factors that may have led them astray, like drugs or alcohol, family troubles or hanging out with the wrong crowd, Ajmi said.

When appropriate, inmates then meet with clerics to talk ideology. One cleric, Khalid al-Abdan, said his work often involved correcting misunderstandings about the so-called "jihad" [mainly referring to extremism and terrorism] and telling inmates that the wars in Syria and Iraq did not qualify because they were more about sectarianism and politics than about religion.

He also reinforces the idea that individuals should be obedient to their rulers and not declare fighting on their own. "These instructions can only come from the rulers," he said.

When asked what he teaches regarding Shiites, considered infidels by most Saudi clerics and militant Sunni groups like Daesh [the Arabic acronym for the terrorist "ISIS" group], who often execute their captives, he said the inmates could hold whatever views they liked as long as they were not violent...

A banner on one wall listed numbers of successful sessions and participants, but no one recalled Yousef al-Sulaiman, a young Saudi who went through this reform center two years ago.

In August, Sulaiman blew himself up inside a mosque used by the security forces, killing at least 15 people, according to Saudi news media. Other graduates of this and other branches of the center have also returned to militancy, including a man who blew himself up near a mosque last year, and 44 of 77 suspects in a deadly attack on a Shiite mosque the year before.

"Here, we treat ideological sickness," said Mr. Ajmi, the psychologist, when asked about such failures. "Just like when a child gets sick and gets better, the sickness can come back later."

At the end of a white corridor lined with cells was a courtyard with artificial turf and a metal grate for a roof, where the inmates are permitted to hang out, smoke and get fresh air. There were a small market selling drinks and snacks, a room where inmates could make [monitored] telephone calls and a small library.

On the library's shelves were newspapers and books on education and religion, including "English for Beginners" and an Arabic translation of "The Eighth Habit," the sequel to the self-help hit "The Seven Habits of Highly Effective People," which was not available.

A nearby cell held five inmates, each with a neatly made single bed and a set of shelves holding books, bottles of cologne and a chess set.
One inmate, Abdullah Mohammed, 29, said he had been studying Shariah at a state university in Riyadh in 2014 when images of violence he saw in Syria persuaded him to travel there and join the al-Nusra Front, Syria's affiliate of al-Qaeda.

"I saw that people were being displaced as refugees, so I wanted to save them," he said. But he was soon disappointed.

"Then I went there and saw chaos, people killing everyone else, and you didn't know who your friend was and who your enemy was," he said.
So he fled to Turkey, where the Saudi Embassy helped him get home. The government was offering amnesty to foreign fighters at the time, so he did not go to prison right away. But he soon got mixed up in some other nefarious business that landed him behind bars.