Hizbullah Secretary General His Eminence Sayyed Hassan Nasrallah threatened the apartheid "Israeli" entity that any aggression against Lebanon will be very costly. 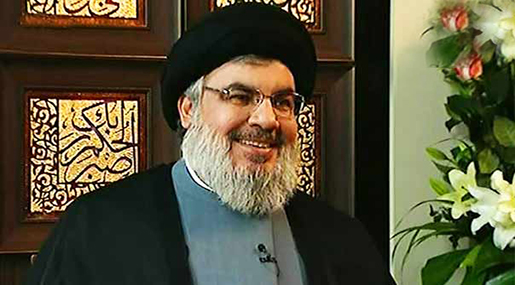 In an interview with al-Mayadeen channel, Sayyed Nasrallah congratulated all the mothers on the Mother's Day holiday. "We particularly congratulate the mothers of martyrs, the wounded and the prisoners as well as the defenders of our country."

On the "Israeli" threats against Lebanon, His Eminence ruled out a war with "Israel".

"The Zionists do not launch a war without an American green light," he said, pointing out that "Obama's administration gives the permission to a war."

However, His Eminence ruled out a close war. "The most important subject is the factor of adventure. Any war on Lebanon is a major adventure and its consequences may be unknown to the US."

In response to the Arab's position from any coming war, the Resistance Leader highlighted that "if the "Israeli" wants to go to war, it won't take the official Arab regimes permission. However, some Arabs work for "Israel"."

Meanwhile, Sayyed Nasrallah revealed that "if a war breaks out with "Israel", we will fight with no limits, ceilings, or red lines."

"The "Israeli" knows very well that Hizbullah possesses rockets that can strike any position in the occupied Palestinian territories," he went on to say, and noted that
""Israel" is keen on the lives of its settlers and this is a point that can be exploited."

His Eminence further acknowledged that "the "Israelis" know that the Resistance possesses effective missile that can hit any point in occupied Palestine. It is our religious and natural right to strike any target in occupied Palestine to repulse any "Israeli" aggression. We have a full list of chemical plants, reactors and warehouses and where they are ... "Israel's" Iron Dome won't help it."

"Through its readiness, expertise, military skills and stance, the Resistance has made the "Israelis" realize that any war on Lebanon will be very costly and that they must balance between feasibility and cost," he cautioned.

In parallel, Sayyed Nasrallah stated: "What is ironic is that "Israel" possesses nuclear weaponry and some parties criticize the Resistance if it tries to obtain defensive weapons."

In this context, His Eminence sent a clear message to Tel Aviv: "The "Israeli" must expect anything from the Resistance and mustn't miscalculate the repercussions of any coming war."

"I will not disclose what weapons the resistance has, but it is the right of the Resistance, Lebanese Army and people, and the armies of the region to possess weapons that enable them to defend their existence and sovereignty ..."

"The nuclear plants in the Zionist entity are present either inside or near the cities," he threatened, noting that "if "Israel" destroys our homes, it is our legitimate right to strike any target in occupied Palestine as a possible form of deterrence."

According to the Resistance Leader, "Since 2000, we do not tolerate any aggression. However, there are those who tolerate the violation of sovereignty in the land, sea, and air. To what extend we can remain silent?"

Commenting on the "Israeli" military drills on the Northern front, Sayyed Nasrallah viewed that these military exercises are not new ... "Some think that Hizbullah is preoccupied in Syria, but we have a team that is dedicated to the "Israeli" issue and everything the "Israelis" say."

On the possibility of a limited "Israeli" aggression, His Eminence emphasized: "If anyone in the enemy's entity is thinking of waging a limited military operation, I tell them that they are mistaken ... We will not allow the "Israelis" to impose a new equation and any step by them will be an uncalculated adventure. We will respond to any attack in a manner that protects our country and the "Israelis" must expect anything from us."

Moving to the Gulf decision to blacklist Hizbullah, Sayyed Nasrallah asserted that "the Arab label to the Resistance as terrorist forms a cover to any "Israeli" war. During the 2006 "Israeli" aggression, there existed an indirect Arab cover."

""Israel" does not wait for an Arab cover to wage its wars. It only weighs its interest and seeks US approval."

Moreover, he said: "It is al-Saud and not the Saudis, who labeled us as "terrorists"."

"Saudi Arabia has a special status in the Arab League, the Gulf Cooperation Council, and the Arab world as the countries that have weight in the Arab world are being targeted. The Saudis owe the power of money, the fatwas and the influence of extremist groups," His Eminence elaborated.

He further explained that "the Saudi regime wants to hold Hizbullah responsible for its failure in several fronts: Lebanon, Yemen, Syria, and Bahrain."

"In Lebanon, the Saudi scheme has spent a lot of money since 2005 to eliminate the Resistance. During the 2006 war, the Saudis sought to prolong the war and we have information in this regard. We have information about the last week of negotiations at the Security Council."

He also viewed that "the Saudi regime fears any kind of opposition even if it was by word."

"Al-Saud started the war against Iran, and the Saudi regime worked so that a nuclear deal isn't reached with Iran," he announced.

Moreover, the Resistance Leader uncovered that he has information about the Saudi scheme to crush the Resistance. "However, I will not talk about its details because of local considerations. If I reveal the scheme, I will create a conflict that we don't seek."

"All accusations against Hizbullah are baseless and if the Arab League's decision was based on this issue then it is invalid. I call on the Arab foreign and interior ministers to reevaluate these accusations," His Eminence reiterated.

On the Syrian front, the Resistance leader recalled that "some sides were surprised by the Russian intervention in Syria, but this issue was being discussed with the Syrian and Iranian leaderships and we were in the picture of these discussions."

"The Russian military intervention in Syria was mulled between Moscow, Tehran and Damascus for six months before taking the related decision," he clarified, pointing out that "Moscow had intensified its military deployment in Syria in preparation for any Russian-Turkish confrontation after Turkey downed a Russian warplane."

As he described the Russian withdrawal as "partial and semi-large", he revealed that "Hizbullah was informed of the Russian troops' withdrawal and we were aware of it before it happened."

"The Russian withdrawal from Syria is partial although significant ... Additional Russian reinforcements were deployed after Turkey's downing of a Russian warplane, but the issue was contained and there is no need for the reinforcements anymore....Hizbullah, Syria, Iran and Russia are in one position and stance regarding the Syrian crisis," His Eminence declared.

He went on to say: "A sufficient Russian air force is still catering to the requirements of the battlefield in Syria and Putin has announced that additional air forces can be sent within hours if needed."

To Be Where We Should Be

Describing all the talk of Hizbullah's withdrawal from Syria in the wake of Russia's pullout as "baseless", His Eminence stressed that his party's presence these is linked to a specific goal.

"We are contributing to preventing the fall of Syria into the hands of Daesh [Arabic acronym for the terrorist "ISIS" group], al-Nusra [Front] and the takfiri groups," he said, affirming that "Hizbullah went there for this goal and as long as this objective needs us, we will be where we should be."

He further announced that the Resistance is capable of sending more forces but we are not seeking a military solution.

"We want to curb the bloodshed and we want the opposition to achieve some of its legitimate demands," he added, warning that "if Syria falls, Lebanon will also fall [into the hands of Daesh and Nusra]. As long as this aim has not been achieved, we will be where we should."

According to Sayyed Nasrallah, "The Americans realized that their mission in Syria is impossible, which pushed the other party to the political solution. The US acknowledged that the alternative in Syria is Daesh and al-Nusra Front if the government was toppled in Syria."

"The US wants a political solution that serves its goals and the goals of its allies. This goal is regime change and controlling Syria to turn it into a subordinate state," he cautioned.

Meanwhile, Sayyed Nasrallah accused Saudi Arabia and Turkey of "disrupting any progress" in the ongoing negotiations between the Syrian government and the opposition aimed at ending five years of war in the Arab country.

On this level, the Resistance Leader insisted: "The political solution must not be imposed on the Syrians by the foreign forces. The Turks might be more realistic than the Saudis regarding the precondition of Syrian President Bashar Assad's departure. Saudi Arabia is the party blocking the political solution in Syria."

In addition, His Eminence emphasized that President al-Assad does not represent himself but rather a broad category of the Syrian people. "Syria's allies will not accept his departure and the solution is to reach a settlement, but not through elimination or exclusion."

On another level, Sayyed Nasrallah hailed the late iconic journalist Mohmmad Hasanein Haikal, who used to meet His Eminence whenever possible. "The aim Hizbullah delegation's visit to Egypt was just to offer condolences over his death."

He also called for dialogue between all parties and countries across the region.

On the internal front, Sayyed Nasrallah showed no rejection for meeting head of the Future Party ex-PM Saad Hariri after his return to Lebanon "if the Hizbullah-Future dialogue requires such a meeting."

However, he noted that any meeting should lead to political results.

"Our representatives are meeting and discussing all issues. Things are deadlocked regarding the issue of the presidency and the electoral law," His Eminence explained as he voiced skepticism about such an outcome in the current period.

Noting that "there is a problem called real partnership" in the country, Sayyed Nasrallah chief emphasized that "the fair and real solution that can reflect the true sizes of all political forces would be an electoral law based on proportional representation."

As for the presidency, Sayyed Nasrallah accused the Lebanese Forces of trying to stir a dispute between Hizbullah and the Free Patriotic Movement.

"If we head to parliament, it is known that [head of the Free Patriotic Movement] General Michael Aoun will not be elected," he added, reiterating Hizbullah's commitment towards Aoun.

"We have a clear commitment and as long as Aoun says he is a candidate, we will support him. We want a strong, firm president who cannot be bought with money, a president who does not bow to the power of the media or the regional and international forces."

Asked about the nomination of the Marada Movement chief MP Suleiman Franjieh, Sayyed Nasrallah stressed that the northern leader is "qualified to be a president."

"We trust him and he is our ally and friend," he added

Stressing the strong relation with the Amal Movement, Hizbullah Secretary General confirmed that Hizbullah's relation with [Speaker Nabih] Berri is not based on coercion and we are ethically committed to supporting Aoun's nomination."

On the electoral law, Sayyed Nasrallah reiterated that the only fair electoral law is the one base on proportional representation