In the wake of the carnage in Paris, speculation is rife over the possible creation of a sustained, effective and coordinated international effort against the Daesh terror group. 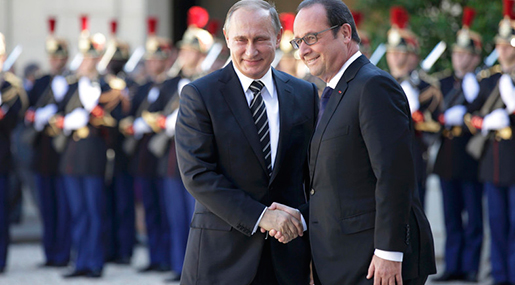 The French President, François Hollande, whose approval ratings only go up in the aftermath of terrorist attacks, telephoned his Russian counterpart, Vladimir Putin, earlier this week to discuss possible joint plans against Daesh.

He even made arrangements to visit Washington and Moscow next week to pursue the "formation of a major military alliance".

The Western media loves it.

Paris is taking the lead, and the west may even claim some of the progress made against Daesh in recent weeks - excluding, of course, minor details like the fact that much of the fighting is being done by the Syrian Army and Hizbullah with Russian air cover.

Could it be that differences on combating terrorism are narrowing?

Will the US-led - divided and self-interested - coalition, team up with the Russia/Syria/Iran/Iraq alliance to genuinely confront terrorist groups operating across the Middle East?

The short answer is ‘NO'.

And that is because the differences on combating terrorism stem from much wider geopolitical disparities, which are nowhere near any form of a resolution.

"One side clearly has a vested interest in seeing the continuation of terror in Syria, Iraq and other locations. It must be understood that the terrorist organizations operating in the Middle East - the overwhelming majority at least - are entirely funded, armed and supported by the West for geopolitical purposes," says author and geopolitical analyst Brandon Turbeville.

While the Russians have repeatedly welcomed cooperation with all countries in the battle against Daesh, both before and after the Paris attacks, western leaders and their regional allies have other priorities.

NATO, which has seen a massive increase in its budget since the start of the Western-engineered Ukraine crisis and whose military drills now span the entire European continent, the Middle East and as far away as Africa, is especially jittery over Moscow's efforts to combat Daesh.

"The effort should be about fighting "ISIL", not supporting the regime, which is what Russia has done so far," said NATO Secretary-General Jens Stoltenberg on Tuesday.

But the problem with that logic, as Mr. Stoltenberg is fully aware, is that it is a contradiction in terms.

Fighting Daesh can only be effective if support is provided to the Syrian government. A political solution to the Syrian conflict can only be brought about once terrorist groups have been eradicated from the country. And the ‘Assad must go' mantra is nothing more than a veiled call for the destruction of the Syrian state, aimed at undermining Russian and Iranian interests in the Middle East.

The Paris attacks last week, which killed over 120 people, have certainly hardened western public opinion against Daesh. The staggeringly high death toll may even prompt a few European leaders to embark on a genuine push to change course on Syria, and more specifically, cooperation with Moscow.

Boston-based political commentator Daniel Patrick Welsh thinks that, "France and Italy, for starters, seem to be interested in cooperating with Russia, because they see that the blowback from their blind allegiance with American interests - along with their own imperial designs - is costing them a great deal."

Those efforts, however, are almost certain to be derailed by the world's two largest corporations, the EU and NATO, in addition to their masters in Washington.

Unfortunately, France and Italy do not call the shots when it comes to the grand scheme of things.

Outlining his program statement earlier this month, the US War Secretary Ash Carter gave a direct and candid description of what drives US foreign policy.

"Terror elements like "ISIL", of course, stand entirely opposed to our values. But other challenges are more complicated, and given their size and capabilities, potentially more damaging," he said.

Carter goes on to say that, "some actors appear intent on eroding these principles and undercutting the international order that helps enforce them... of course, neither Russia nor China can overturn that order. But both present different challenges for it."

According to the founder of Stopimperialism.org, Eric Draitser, "Certainly, there is a need for unity in the fight against Daesh. But of course that presumes that Washington's primary goal is the elimination of Daesh. I would argue quite differently; the US is mainly interested in undermining and weakening Russia and China, and hopes to translate the Daesh threat into the political currency of destabilization."

As long as Washington's foreign policy continues to focus its efforts on the removal of what it deems to be ‘unfriendly' or ‘rogue' governments, a united and genuine international effort against Daesh is a long way off.