Within four hours he had booked a ticket and boarded a flight from Berlin to Beirut. Those few hours were the longest of his life. He was devastated, confused, and somewhat angry. He kept asking himself, ‘why?!'

The funeral procession and burial had to be held in the capital Beirut. Even worse, Adnan could not live any longer in his house in occupied southern Lebanon. The Israelis had only recently imposed a new rule: any family from which a member is found to be a resistance fighter, whether dead or alive, that family will be banished from their home and prohibited from remaining in the occupied South. 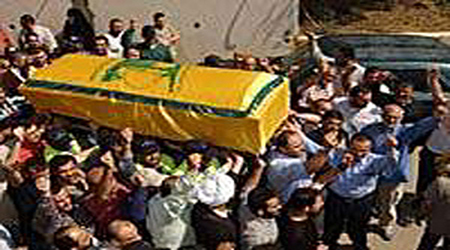 Adnan tried to hold back his tears as hundreds waited their turn to not only condole and console him, but congratulate as well.

"May he be granted an abode alongside the Master of Martyrs inshAllah', one elderly man addressed him aloud.

Adnan sat quietly with his son Jawad. He finally began to regain some composure. He looked at Jawad who sat opposite to him. Jawad had a strong build, was handsome, and highly resembled his martyred brother.

"Are you in the Resistance too Jawad - be honest with me?"

"Dad, you be honest with me, are you proud of Sadiq's martyrdom?"

"How did he fall son?", Adnan countered, to dodge the difficult question.

"Dad, it is your right to know, and I've been given permission to tell you..."

"Sadiq was a leading commander..."

"Of the missile launchers..."

"All missile launchers of the Resistance dad, north of the Litani."

News quickly spread of the martyrdom of the Hizbullah Secretary General's son Sayyed Hadi Nasrallah. Adnan ordered the whole family to immediately get dressed. This was the son of Sayyed Hassan Nasrallah after all - his eldest son too. 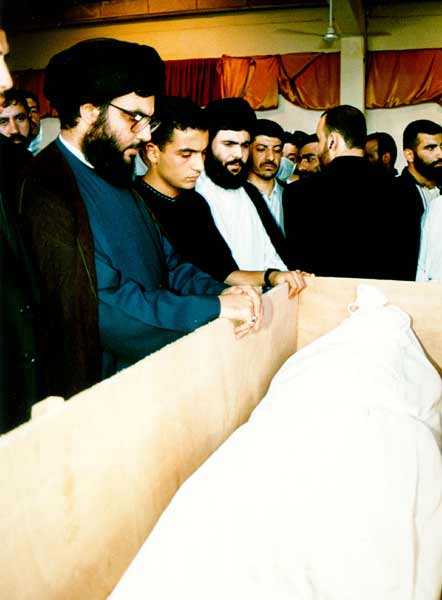 Adnan focused all his attention on the Secretary General of Hizbullah. His glory, dignity, power, confidence, and beauty. His black turban was a constant reminder of his ancestors, the Holy Prophet's progeny, cruelly oppressed throughout the ages.

There was much talk whether the Sayyed will actually speak to the crowds. It had only been hours since his son was martyred. But there he was, standing as tall as a mountain, much to the euphoria of the thousands that had gathered.

"Praise is due to God, who took a generous look at my family, and chose from it a martyr", Sayyed Nasrallah eloquently announced.

Listening to these words, Adnan hated himself. One man sat his child on his shoulders. Donned in a small military outfit, the child waved the yellow banner of the Resistance. The raised AK-47 imprint on the flag momentarily covered Adnan's view of Sayyed Nasrallah.

Deep down, Adnan was more and more convinced that military resistance against the "Israelis" was necessary, and that the "Israeli" army was not some ‘invincible army'. Sayyed Nasrallah spelled out this reality to the crowds, but it wasn't mere talk either. The "Israelis" were gradually losing ground in the South due to the painful, continuous blows of the Resistance.

People gathered around the Secretary General to express their condolences and felicitations in person. Adnan stood nervously on the edge of the human circle that surrounded Sayyed Nasrallah. In the blink of an eye, Adnan found himself a mere arms-length away from the leader of the Resistance. Jawad smiled at his father and let go of his hand. After having navigated his father through the hustle and bustle, Jawad solemnly saluted the leader, and introduced him to his father.

Sayyed Nasrallah looked at Adnan and embraced him. The storm of his stature captivated Adnan, just like the few words that he could remember from his leader:

"Congratulations Hajj Adnan, now we are both the fathers of martyrs".