As-Safir newspaper has revealed that the Lebanese security services, especially the General Security, after monitoring the case of the Lebanese soldiers abducted by the armed terrorist groups in the barren lands of Qalamoun, has managed to put together an almost complete picture of the activities of "Daesh" in the Qalamoun region, the barren lands of Arsal, and other areas of Lebanon. This is despite the fact that the organization has not announced that it has a specific, official, centralized structure, even on the level of each of its "Emirates", due to the secrecy it has adopted on the one hand, and the young age of the organization on the other. 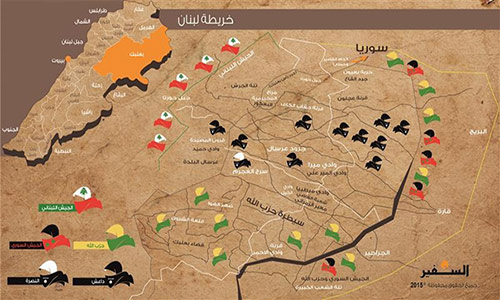 The Regions Controlled by "Daesh"

The regions controlled by "Daesh" are located, according to the paper, along the conflict lines with the al-Nusra Front [al-Qaeda branch in Syria] in the Arsal barren lands up until the Syrian interior, specifically the Sheikh Ali and Jarajeer crossings lines [towards Fleeta, which Hizbullah took control over recently], and Mortabiyan and al-Zimrani [on the borders of Jarajeer-Qarah] and Wadi Mira [between Qarah and al-Bureij within Syria].

As-Safir added that ""Daesh" controls a portion of Arsal, stretching from Sarj al-Ajram to the north-east, to Qurn Sha'bah al-Qadi on the Lebanese-Syrian border, and the Tallet Ba'koor in the Ras Baalbek barren lands, as well as Mirah al-Mukhaymirah in Ras Baalbek reaching up until Qal'it M"alif and Hourata on the border between Ras Baalbek and al-Qaa.

Furthermore, the paper noted that Khirbat al-Dimenah in Ras Baalbek and Khirbet Bi'yoon in upper Bi'yoon valley in the barren lands of al-Qaa, are considered conflict lines between "Daesh" and Hizbullah, whereby the presence of the former reaches Hasiyyan Hill on the border between the al-Bureij and al-Rahebah in north Qarah in the Syrian barren lands.

The paper further explained that the borders of the conflict lines between "Daesh" and the Lebanese army stretch from the upper Hosn checkpoint on the outskirts of the town of Arsal, and passes through the Hamid Valley area [directly after the army checkpoint] and Quroon al-Maseedah in Arsal facing the al-Masedah checkpoint westwards, up until Tallet Ba'koor in the Ras Baalbek barren lands and Khirbat al-Dimenah in the al-Qaa barrens.

As-Safir spoke of conflict lines that are currently taking shape between "Daesh" and the "Conquest Army" - which includes the al-Nusra Front - in the barren lands of the two Syrian towns of Qarah and Jarajeer in western Qalamoun; this while keeping in mind that al-Nusra Front had captured in recent months, bases for "Daesh" in the al-‘Agram areas, in al-Jubbah and al-Ma'rah.

As-Safir newspaper also revealed that the current number of "Daesh" members in the Qalamoun barren lands are an estimated 800 fighters, including those who are known as "al-Inghimaseyyin" [160 fighters] and suicide bombers [40 fighters].

The paper pointed to the intersection of intelligence information between the Lebanese security services with regards to the recent dispatch by "Daesh" of about 400 fighters from al-Raqqa and other regions, to the Qalamoun area along the Lebanese border, in an attempt to inherit [the presence of] the al-Nusra Front [the al-Qaeda branch in Syria], in the light of the blows that the "Front" received [while also betting on gaining pledges of allegiance from members within the al-Nusra Front].

In this regard, what was notable - according to As-Safir - was the sending by "Daesh" of "Abu Ayyub al-Iraqi", the so-called "ruler of the Emirate of the Levant", an explosives expert. Moving him from Palmyra to Qalamoun in recent days, they assigned him the task - to be done in coordination with the Emir of the State of Qalamoun Omar Saif al-Jazrawi [Abu Sayyaf] - of leading the battle of Qalamoun and the Arsal barren lands, and to try to take back the areas lost by the al-Nusra Front. In addition, he [was tasked with] pressuring Hizbullah and the Lebanese army in al-Qaa and Ras Baalbek, and it has been said that he was involved in organizing the latest attack which led to the killing of 20 "Daesh" members, 14 of whose corpses Hizbullah kept.

The paper quoted informed experts who said that the appointment of al-Jazrawi as the Emir of Qalamoun is considered a smart move, because the "Green Battalion" - which he formerly headed - was stationed in Qalamoun, and therefore, al-Jazrawi and his fighters know this area very well. In addition, he is a former fighter in Afghanistan and has considerable experience in warfare as well as setting booby-traps. Furthermore, the "Green Battalion" is known to have the highest percentage of "Inghimaseyyin" and suicide bombers in its ranks, and that it has in the past carried out huge suicide operations against Syrian and Lebanese army checkpoints in the Qalamoun region.

The Organization's Goals Regarding Lebanon

The newspaper reported that "under the instructions issued by the "Emir of the organization"" Abu Bakr al-Baghdadi, "Daesh" is trying to find a supporting environment among Sunnis in Lebanon, by highlighting the [idea that they are] oppressed, and underlining the attempts of Hizbullah to break their will, whether in Sidon, Tripoli, or Arsal!"

This and "the organization is betting on the fact that its success in establishing the Emirate of Qalamoun will open the door for expanding into Lebanon [Arsal, then Ras Baalbek, al-Qaa, Hermel, Akkar, then onto Tripoli] in order to reach the doorstep of the Mediterranean Sea and create a strategic naval port for the organization."
It also pointed out that the establishment of a solid military structure in western Qalamoun enables the organization to expand out in order to converge with its other members that are scattered in the Damascus countryside.

In this context, As-Safir added that the long-term [strategic] objective is to block the path of Hizbullah convoys heading to and fro Syria, as well as to cut the supply line of weapons convoys that reach the party by road [via the Iraqi-Syrian border]. Thereafter, they aim to cut the road between Qalamoun and the coast of northern Syria [wherein lies the ports of Baniyas, Tartous, and Latakia].

The newspaper added that the opponents of "Daesh" are trying to fund out its intentions - where lies its priorities in Syria, and whether [it plans anything for] Lebanon in this tense period. Furthermore, its opponents aim to find out the credibility of the rumors regarding the intention of the organization to breach the rules of the game by attempting to control central Syria [the Homs governorate], considering the repercussions of this scenario for the Eastern Mountain Range [Qalamoun], Arsal, Ras Baalbek, al-Qaa, as well as the entire northern region [of Lebanon].

At the same time, what is notable - at a time when the final part of the western Qalamoun battle is not far off, the "Daesh" organization held a series of training courses involving dozens of fighters, the largest and most prominent of which was held in the Mira Valley. The one in the Mira Valley was a specialized course [aimed at establishing a Rapid Intervention Task force] that included about 100 fighters dressed in distinct uniforms when compared to the rest of the organization's fighters.

As-Safir listed several points which revealed the integrated organizational structure for "Daesh" in the Qalamoun area, which is divided as follows:
- the General Emir of the State of Qalamoun: the Saudi Omar Saif al-Jazrawi [Abu Sayyaf], who was formerly the leader of the "Green Battalion", before all of its members joined "Daesh". Al-Jazrawi receives his orders from the Emir of the State of the Levant, Abu Ayyub al-Iraqi [Saja al-Dulaimi, the wife of al-Baghdadi, who is currently in the custody of the Lebanese General Security, is likely the sister of Abu Ayyub al-Iraqi].

- Military Emir of the State of Qalamoun: the Syrian al-Muwaffaq al-Jerban [Abu al-Sous], who use to lead the "al-Farouq Brigades" before joining "Daesh".

- Emir of Qaati'-al-Jarajeer: the Iraqi Abu Balqis al-Adnani, he was given the leadership of the organization for a brief period until the arrival of Abu Sayyaf al-Jazrawi.

- Emir of the Qarah sector: the Syrian Abu Dergham al-Qari

- the organization's coordinator in Lebanon: the Saudi Ahmed al-Dosari [permanently located in Mosul, Iraq, and is tasked with preparing military plans that are to be implemented by the organization in Lebanon].

- the general coordinator of the leaderships of "Daesh" in Lebanon and Syria: Ismail al-Khatib.