Hizbullah Secretary General His Eminence Sayyed Hassan Nasrallah delivered Friday a speech in which he tackled a number of issues, on top of which is the US-Saudi aggression on Yemen. 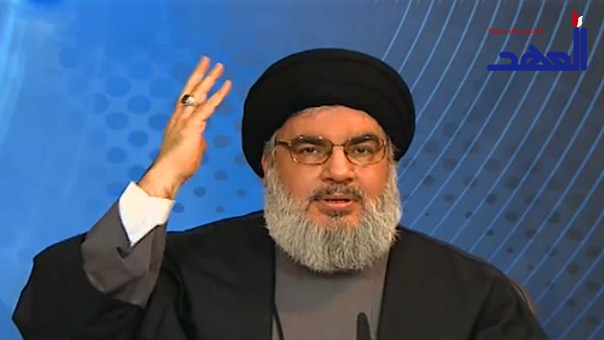 "The latest development in the region -- the start of a hostile war on Yemen will be the focus of my speech," His Eminence said, pointing out that "any Lebanese or Arab citizen has the right to take the stance they want on a major development such as the aggression against Yemen."

According to Hizbullah Secretary General, "It's painful that for decades, the peoples of the region, especially the Palestinian people, dreamt of a Saudi Storm of Firmness."

"The aggression on Yemen, provides a new proof that "Israel" is not an enemy of some Arabs," he added, noting that "For decades, the people of Palestine and the countries neighboring the Zionist entity did not feel any "Firmness Storm", not even a "firmness breeze"."

His Eminence further stated: "Those who agree on this war on Yemen are partners in it."

"If the "Storm of Firmness" was launched against "Israel", we were to be soldiers in it," he declared, noting that "the Arab governments, specifically the Saudi regime, have abandoned the Palestinian people, leaving it a prey to "Israel" and the US."

On this level, Sayyed Nasrallah wondered: "The Palestinian people are still pleading to you and the houses of thousands of Gazans were destroyed. They are Sunni Muslims and they urged the Arab leaders who did not bat an eye. Where did you bring this resolve, nobility and firmness from?"

"Iran rescued the Palestinians and offered them everything in its capacity."
"Saudi Arabia's policy not to recognize the people's movements in the region leads to accumulated failure," he added, clarifying that "a fundamental problem in the mind of the Saudi regime, is the lack of recognition of movements and people's issues in the region."

"You did not sense any threat coming from "Israel", which has one of the biggest armies in the world. "Israel" borders your seas and oceans, but it was never an enemy for you or a threat."

Regarding the Saudi aggression's declared justifications, His Eminence elaborated: "There are three justifications that are being circulated -- the first is that there is an elected, legitimate president, although he resigned and retracted his resignation and his term ended according to the Gulf initiative. Is this alibi enough to wage a war against Yemen?"

"You didn't assemble an international coalition for Egypt's Mubarak, so why Yemen?" His Eminence asked.

"The third excuse -- which is being must promoted by the Arab, Gulf and Saudi media outlets -- is that Yemen has become occupied by Iran. This is one of the biggest lies that are being circulated."

Moreover, he stated: "Sanctions and calls could have preceded the decision to resort to the military option, so why did you rush to war, which should have been kept as the last remedy?"

"Another excuse is that the new situation in Yemen was threatening the security of Saudi Arabia, the Gulf countries and the Red Sea. Is this true? Is there a proof that you can offer to peoples, scholars or muftis? This is neither a religious behavior nor it is humanitarian," Sayyed Nasrallah mentioned.
In response to these claims, he raised the question: "Where is your proof that Yemen is under Iran's occupation? Where are the Iranian military bases and armies in Yemen?"

The Resistance leader wondered "What did the Huthis do for you to accuse them of threatening your security?"

On this level, he recalled that "the brothers in Ansarullah were in contact with Saudi Arabia, Qatar and the Gulf countries and there were negotiations. On the eve of King Abdullah's death there was a delegation holding negotiations and they went to political dialogue in Riyadh, but everything changed with the new Saudi rulers."

However, His Eminence highlighted that "the Saudi regime deals with all people as followers who do not have an independent identity and they deal with all countries according to this. This thinking has led them to wrong stances and policies and accumulating failure."

"What have you done for Iraq? ... When it appeared that the Iraqi people wanted to regain their position and confront occupation, you unleashed al-Qaeda and all the takfiri groups against them."

In addition, he confirmed: "The Saudi intelligence was behind sending the suicide bombers to Iraq and your latest crime against Iraq was Daesh, which you and your allies sent to topple Bashar Assad and al-Maliki's regime."

"Your Bandar [Bandar bin Sultan] is the one who financed Daesh," Hizbullah Secretary General stressed, questioning: "Who is stoking the blaze in Syria other than the Kingdom of Saudi Arabia?"

"Saudi Arabia, Qatar and Turkey has made efforts in order to make Syria a following state."

According to him, "the Saudi is lazy towards Arabs and there is a country like Iran that is quick to act."

"KSA has been interfering in everything in Yemen, but where is security and where is prosperity in Yemen? Why did you refuse Yemen's membership in the Gulf Cooperation Council? Didn't you deal with the Yemeni people in an arrogant and insulting manner? Didn't you voice support for the eradication of Huthis? Didn't you play on the contradictions of Yemen in order to spread your control on it?"

Based on Hizbullah's experience, His Eminence stated: "Iran has never given us orders and we're an independent leadership. We sometimes seek Iran's expertise the same as Saudi Arabia deals with its friends in the world."

"Imam Khamenei is the Imam of the Muslims and our Supreme Leader. However, Iran has never ordered us."
"Iran will not and has not interfered in the presidential elections. It has nothing do with this issue and the party obstructing the elections is Saudi Arabia, specifically Foreign Minister Saud al-Faisal."

On the solution for the Yemeni crisis, Sayyed Nasrallah called for an immediate end to the aggression on Yemen and to restore to the political solution
"The Yemeni people has the right to defend its nation and they will emerge victorious. The Saudi regime is to suffer the defeat and the real victory is for the Yemeni people."

According to His Eminence, "The Saudis supported six wars to eradicate Yemen. However, you were defeated."
"It is required to shed the Yemeni blood because the Saudi King lost control over Yemen. The real reason to this aggression is that Saudi Arabia has lost its hegemony and bets in Yemen and lost hope in its takfiri groups. It has sensed that Yemen is now for its people and this war aims to regain hegemony over Yemen."

On the internal front, Sayyed Nasrallah explained: "Our stance on the Special Tribunal for Lebanon is irreversible, that's why we won't comment on anything emanating from it."

"From the very beginning, there were political forces inside and outside al-Future movement who rejected dialogue and tried to sabotage it, including the testimonies that were given before the tribunal. We do not care about these stances and we will carry on with this dialogue as long as it serves the national interest. We will bear all these provocations and we call on the supporters of the resistance not to heed these voices that are trying to stir strife."

He also mentioned that "from the very beginning we chose dialogue for the sake of the country and its people. Strength is to sit together, engage in dialogue, defuse tensions and prevent the collapse of the country."

Sayyed Nasrallah further hoped that this new political disagreement will not lead to renewed tensions in the country or in the cabinet.