As His Eminence thanked the people who abided his calls not to shoot in air, white and yellow balloons were launched in the air from the al-Qaem complex in Dahyieh at the beginning of the speech. 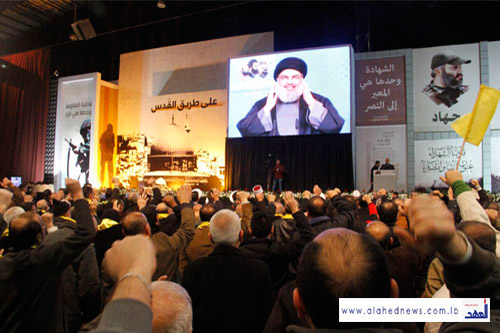 Sayyed Nasrallah strongly condemned Daesh's crime against the Egyptian workers in Libya, which cannot be tolerated by any religion. "We extend our condolences to the Egyptian people and the Coptic Church and this crime has affected both Islam and Christianity."

On the anniversary, the Resistance Leader explained that "we commemorate and talk about this anniversary and the martyrs' jihad for us and to draw lessons and to teach the sons, grandsons and future generations, not for the martyrs. We celebrate this occasion so that the past remains connected to the present and future."
"When "Israel" was occupying our land, Sayyed Abbas, Sheikh Ragheb and Hajj Imad were saying that "Israel" not only will leave our land but also will be eliminated from the world."

He further highlighted that "it is important to learn loyalty and honesty from the martyrs and to learn the responsibility of making a decent and dignified future for our people and nation. We talk about the martyrs' jihad to draw lessons and to teach the sons, grandsons and future generations."

"Martyr Jihad Mughniyeh stood on this podium to pledge his allegiance and declare his belonging through his free will," His Eminence said, noting that the young martyr "carried Hajj Imad's spirit, left his university and went to Quneitra where he fell a martyr."

In parallel Sayyed Nasrallah hailed the martyrs who recently fell in the Quneitra aggression as "the sons of prominent resistance fighters who contributed to victories."
"The blood of the martyr Jihad has revived the memory of the commander Hajj Imad Mughniyeh and returned this brilliant and historic leader to the forefront of events once again, confirming that his presence is still strong in the minds of friends and in the mind of the enemy, which will always be haunted by Imad Mughniyeh's blood."

Moving to the internal Lebanese front, Hizbullah Secretary General condoled the family and the supporters of late PM Rafik Hariri after the painful incident that shook the region. He also extended his condolences to the families and loved ones of the martyrs who fell in that agonizing and very dangerous incident."
"We in Hizbullah support the call for devising a national anti-terror strategy," he added, noting that "We agree on the enemy that is terrorism and, unfortunately, we disagree over another enemy, which is "Israel"."

Moreover, Sayyed Nasrallah urged "the government, parliament and any dialogue session to exert efforts for such a [anti-terror] strategy."
He also reiterated the party's ultimate support for the security plan in the Bekaa. However, he stated: " We believe it came late."

"The security plan must continue because the Bekaa region was suffering from thieves and outlaws who were intimidating people. Alongside the security plan there are two issues - the development plan in Baalbek and Hermel as well as in Akkar, and resolving the problem of tens of thousands of people who are wanted over minor or old offenses."

On another level, His Eminence warned that "today on the eastern mountains, there exists Daash and al-Nusra, and when the snow melts, the state must make up its mind how to deal with these threats on the hills and mountains."

"A decision must be taken as we renew our tribute to the officers of the Lebanese Army as well as to the Resistance men," he said, calling all sides to "support the army, security forces and government to control the security situation, that's why the plan must continue. It has been said that the fugitives have fled the area; the army must make sure that they don't return and there should be no leniency."

In addition, he declared: "We will face another challenge when the snow melts. Daesh and al-Nusra are present on the other side of the Eastern Mountain Range. Circumstances have limited or prevented the confrontations and the state must take a decisive stance on how to deal with this threat that is present on hills and mountains."
"We must renew the salutation to the young men who are deployed on the heights of mountains - the officers and soldiers of the army and security forces and the Resistance's men."

Sayyed Nasrallah also saluted the officers and soldiers of the Syrian army who are preventing the dispatch of bomb-laden cars. "They have all our salutations and appreciation amid this snow and cold."

Internal Dialogue A Must

As His Eminence called for deepening the relationship between Hizbullah and the Free Patriotic Movement, he urged the Lebanese political sides to hold similar understandings on the national level.

"On the anniversary of the Hizbullah-FPM understanding, the importance of this agreement and major achievement is being more pronounced and its impact on the political situations in Lebanon and the region is revealing itself. We call for deepening and consolidating the relation and the agreement and we call for similar agreements at the national level. We were hoping to expand the agreement because there is a major national interest in anything that closes ranks and achieves accord."

Regarding the governmental work, Sayyed Nasrallah reiterated: "We are with the government and we support it to continue its work as the alternative is vacuum," calling for the resumption of the internal dialogue."

"We call for renewing the domestic efforts and the relevant parties in this regard are well-known. I call on all those who are keen on preventing vacuum not to await foreign changes, neither the Iranian nuclear issue nor the Iranian-Saudi dialogue, because the region is heading to further crises and confrontations."

In parallel, His Eminence emphasized that all sides must support the government and it should continue its work because there is no alternative other than vacuum and chaos, and I don't think that anyone has an interest in this alternative. "We must cooperate to resolve the disputes and we'll deal positively regarding some solutions. We call for overcoming the problem so that the cabinet can convene again to shoulder its responsibilities."

According to the Resistance leader, "these terrorist groups can be easily defeated, but the issue requires a national decision and will."

On the presidential elections, Sayyed Nasrallah called for the resumption of the internal dialogue.
He urged the Lebanese not to wait for changes in the region and abroad, because the region is destined to further confrontations and crises. "Go back to the internal effort to end this issue."

Sayyed Nasrallah also announced that Hizbullah will continue the dialogue with the Future Movement. "This dialogue has produced some positive things that were within our expectations and we hope to come to a positive end."
To all parties claiming to be advocates of independence and sovereignty, he said: "Let us renew the national domestic efforts to resolve this presidential issue and cross this juncture. We also renew our encouragement and support for any dialogue between all the Lebanese components "

He also elaborated: "Since decades, a Lebanese logic says that we want to isolate Lebanon from the regional events and distancing it from everything that is going on in the region. This is a nice speech, but this is unrealistic."

According to Sayyed Nasrallah, "The facts of history, geography, life and nature say otherwise. For example, we can't tell a storm that we dissociate ourselves from snow and rain because we are a "piece of heaven."

Takfiris A Threat to Islam


Meanwhile, His Eminence advised those who criticize Hizbullah's position in Bahrain and claim that we are disturbing Lebanon's relations with a brotherly country, "you mustn't intervene in another country, particularly Syria." 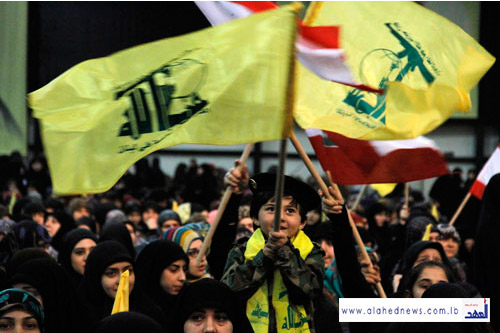 Regarding the Takfiri movements, Hizbullah Secretary General recalled: " We have previously warned that the Takfiri threat isn't a threat on certain regimes, but to all the countries and people. Takfiris are a threat to Islam as a religion and a message. All the world peace is threatened by "Daesh"."
"The region went through major events and it is being recreated from scratch," he confirmed, noting that "whoever wants to decide Lebanon's fate must be present in the fate of the region. If you want to be absent, you are telling others to control your fate."

Sayyed Nasrallah further added: "In light of this travail, the fates and survival of entities and peoples will be decided and the entire world will be affected. No one can say, "I'm Lebanese", because the fate of our people, country, dignity and the future of our generations is at stake."

With his known sense of humor, he said: "In the past, we faced the problem of convincing some Lebanese that we are part of the Arab region and the Levant, but their stance today has taken a more negative course because we now have to convince them that Lebanon is part of Planet Earth, not of Mars. "

On Hizbullah's stance from the Bahraini revolution, he stated:"We did not call for toppling the regime in Bahrain, we only supported those who were calling for dialogue. We call for avoiding any response to the authorities' violence and Bahrain's blind government must applaud this stance.

As His Eminence salutes the Bahraini revolutionaries over their wisdom, and peaceful movement, Sayyed Nasrallah slammed the Bahraini regime's brutality. " Because there is a terrified government in Bahrain that fears any word of right, it gets nervous and it threatens to expel the Lebanese. This is the approach of a weak authority and this is something shameful."

Noting to the ongoing cooperation between the terrorist groups and the Zionist entity, His Eminence stressed, " Only "Israel" does not consider al-Nusra and Daesh a threat and you heard what ["Israeli" War minister]Yaalon said.
""Israel" has the right not to consider Daesh a threat because everything the group has done serves "Israel's" interests, whether Daesh knew that or not," he added.
To the Saudis, Sayyed Nasrallah sent a clear message, "Daesh's eyes are on Mecca and Medina, not on al-Quds, because the "caliphate" cannot function without the Two Holy Mosques."

"For the first time I say search for the hands of the Mossad, the CIA and the British intelligence in the deeds of Daesh, which is doing everything that serves America's hegemony in the region."

He also told the Lebanese: "Italy's defense minister has said that her country is willing to join an international anti-terror coalition because "terrorism is now only 350 kilometers away from the Italian border." Terrorism is on our border in the mountains, al-Qseir and Qalamun and some parties are speaking of right and wrong."

"We must not fool ourselves by trying to differentiate between Daesh and al-Nusra Front," His Eminence said, pointing out that "they are one reality, one ideology, one approach and one goal."

A Message to Gulf

"Some countries," according to Sayyed Nasrallah, "especially Gulf countries, must approach the region's problems in a different manner, because they are in the circle of danger." 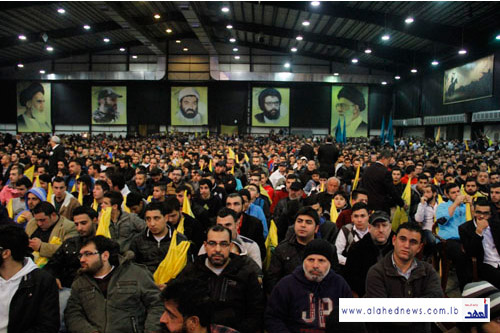 To the Gulf countries, he said," You failed in Yemen, so search for the reasons of your failure because influence cannot be built on corruption and buying consciences. In Yemen, there is a real revolution that is standing in the face of al-Qaida and Daesh which are threatening all of you."
He also urged these monarchies to talk to the al-Khalifa family to release the detainees and engage in dialogue. "Lift your veto over the presidential crisis and allow the Lebanese to reach an agreement over a president."

On the Syrian crisis, Sayyed Nasrallah declared: "The game has ended in Syria and the insistence on fighting has become a form of intransigence. The non-takfiri opposition must be allowed to seek a settlement and the regime will accept that."

"I tell those who are asking us to withdraw from Syria, "Let us go together to Syria and Iraq and to any place that contains a threat to the future of our nation, because that is the right way to defend Lebanon."