Hizbullah Secretary General His Eminence Sayyed Hassan Nasrallah delivered Friday a speech in which he delivered a strong message to the Zionist entity.

Sayyed Nasrallah spoke during a ceremony held by Hizbullah in Sayyed Shuhada Complex, in Dahiyeh [Beirut's Southern Suburb], to pay tribute to the great Quneitera martyrs.

Thanks to Resistance People, LA 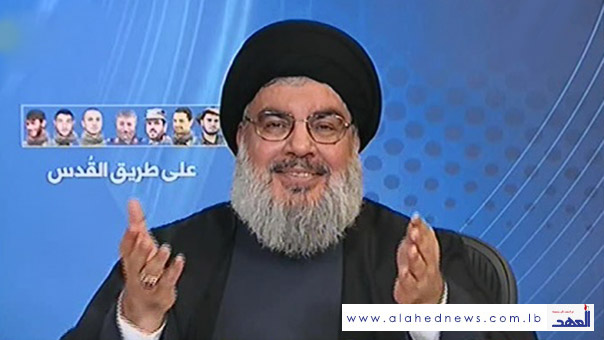 At the beginning of his speech, His Eminence welcomed and thanked the Resistance people for their participation in the Martyrs' commemoration.

On this level, Sayyed Nasrallah thanked the Lebanese people, the Resistance's supporters and all those who stood by the resistance, took part in the martyrs' funeral and expressed their sympathy and support for any decision taken by the resistance. "They stood with their known covenant and steadfastness so that we must tell them every hour, ‘O you the most honorable and purest people."

"I would like to condole our masters, the families of martyrs, as their beloved sons were elevated to Divine high grades away from this false life."
In parallel, he saluted the families of the martyrs and thanked all those who offered their condolences to the Resistance. "I salute the supporters of the Resistance, who stood by us the moment the Quneitra strike took place."

"My thanks to all who shared with us the solace and expressed support, whether directly or through letters, or any other way from Lebanon to Palestine to Syria, Iraq, Jordan and throughout the Arab and Muslim worlds and to all those who celebrated the Resistance operation in the Shebaa Farms," he added.

Moreover, the Resistance Leader dedicated his special thanks to the Resistance, men who were up to the responsibility of the Quneitra criminal attack.
Sayyed Nasrallah also commented on the recent terrorist attack that hit the Lebanese Army in Ras Baalbek by saying: "It is our duty, as we commemorate the resistance's martyrs, to stand in respect in front of the Lebanese Army's martyrs in Ras Baalbek, who fell while defending Lebanon and the Bekaa Valley in the face of the terrorist groups that prove every day that they are dedicated to the "Israeli" scheme.."

Unity of Blood to Face "Israel"


Moving to the "Israeli" attack in Syrian Quneitera, His Eminence hailed and saluted the Resistance martyrs. "The Quneitra martyrs represent a number of the Resistance's generations."

To the martyrs, Sayyed Nasrallah said: "We congratulate you for being blessed to fall as martyrs. We pray that Al-Mighty God grants us the same honor."
According to Sayyed Nasrallah: "The mix of Lebanese and Iranian blood on Syrian soil in Quneitra represent the unity of our battle and destiny. This is the secret of the resistance, and this reflects the affiliation of the whole school of Jihad and the families of martyr."

"Since 1948, our region has been suffering from a cancerous growth called the Zionist entity," he reiterated, noting that "in recent years, "Israel" has resorted to the same arrogant practices it had adopted decades ago."
Sayyed Nasrallah recalled that "Israel" carried out a bloody aggression against Gaza and it has violated the most basic of Palestinian rights.

"In Syria, he explained that "Israel" has been backing the extremist groups and shelling regime positions under various excuses. In Lebanon, it does not recognize resolution 1701 and has committed thousands of violations against the country's sovereignty."

Sayyed Nasrallah continued: ""Israel" believes that it can threaten all armies and governments in the region whenever it pleases and without being deterred. It is benefiting from the divisions in the region and the complete absence of the stances of the Arab countries, especially the so-called Arab League."

Slamming the Arab inaction, Hizbullah Secretary General said: "There is no such thing as an Arab League or an independent Arab stance when it comes to "Israel". Arab positions and arms are available when it comes to Yemen, Iraq, and Syria."

"Given this reality in the region, the Quneitra airstrike took place on January 18," Sayyed Nasrallah revealed some aspects of the "Israeli" attack. "An "Israeli" helicopter targeted two civilian vehicles transporting our seven Mujahedeen brothers in the area. Our brothers in Quneitra were martyred in a clear assassination, in a decision taken by the Zionist entity. Some reports mentioned that the head of the opposition in the Zionist entity was informed of the critical decision." 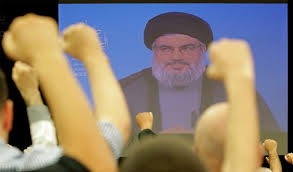 On this level, Sayyed Nasrallah said: ""Israel" has not yet claimed the responsibility for the assassination believing that Hizbullah is weak and would hide the news of airstrike and martyrs."

However, according to His Eminence, ""Israel" was surprised that Hizbullah announced the name of its martyrs within a short time of the strike..We are here in front of a clear and public assassination, similar to that targeted our teacher, Martyr Sayyed Abbas al-Mousawi, his wife and his child, and there is not a coincidence or a mistake in such an operation."

He further rejected all "Israeli" claims that the Resistance men lost their road or were preparing for an operation. "Thousands of al-Nusra Front members are present along the border with the Zionist entity in the occupied Golan Heights. Neither Netanyahu nor Yaalon are concerned by the presence of al-Nusra on the Zionist entity's border."

""Israel", however, felt threatened by six Hizbullah members and an Iranian general passing in civilian cars, without missiles, through Quneitra," he highlighted.

Sayyed Nasrallah also uncovered that "Our martyrs were at a point located 6 km from the border as two thousand al-Nusra militants separated between our martyrs and the "Israeli"."

"The Takfiri armed groups, especially those in the Golan Heights, are a natural ally of the "Israeli" army, even if they raised the Islamic flag."

"The facts say that there is an "Israeli" decision to target this group, we do not know when the decision was made, at the highest levels in the enemy's entity and was waiting for the hour for implementation, and that was on Sunday."

Moreover, His Eminence shed light that "in the assassination there exists a painful side and an emotional humanitarian dimension. Yes, we suffer, mourn, and cry and on one of the days I cried like any other father, away from media."

"Israel" on One foot

"On the day of assassination, "Israel" immediately anticipated a Hizbullah retaliation to the Quneitra assassination and therefore took all precautions."


"We did not hesitate in making the decision that "Israel" should be punished for its crime in Quneitra even if it meant going to an all-out war," he revealed, pointing out that the Resistance immediately began planning its retaliation.

According to Hizbullah Secretary General, "The first achievements of these martyrs is that from Sunday until Wednesday afraid "Israel" stood on a leg and half."

"We had no hesitation in taking the decision that "Israel" should be punished for its crime in Qunietra. We prepared ourselves for the worst case scenario when we took the decision of response."

His Eminence clarified that "the resistance carried out its Shebaa operation in broad daylight in spite of the fact that "Israel" was at its highest level of preparation."

Emphasizing some aspects of the victory reached by the Heroic Resistance operation, Sayyed Nasrallah mentioned: "In the result, they assassinated us in broad daylight at around 11:30 and we killed them in broad daylight, 11:25 to 11:45 The "Israelis" targeted 2 cars, we targeted more than two cars. They attacked us by missiles and we did the same. They were killed and we fell as martyrs. "Israel" did not claim responsibility for the Quneitra attack, but Hizbullah announced the responsibility for the Shebaa operation soon after it took place."
To the enemy, Sayyed Nasrallah sent a clear and strong message, "You tried us. Don't test us."

"I salute the heroic Resistance men, who carried out the Shebaa Farms operation."

To "Israel": You Tried, Don't Test

""Israel" must understand very well that this resistance is not and won't be deterred, but it is wise."

To the Zionist entity, His Eminence's message was direct: "The resistance no longer cares about rules of engagement and we do not recognize them in confronting the enemy. We have the right to confront the enemy at any time, place, or manner."

Sayyed Nasrallah also mentioned: "Wednesday was the most important message to "Israel" that do not mistake the calculations. I'm not talking about psychological warfare, but the mere truth, which we expressed in the battlefield."

He added that the resistance did not want war, however, it did not fear it, and imposed a new equation in the conflict against the Zionist enemy.

"The "Israelis" can't kill our people and then go to sleep ... their farmers can't stay in their fields and their soldiers can't stroll up and down the border as if they merely killed mosquitoes," His Eminece said, asserting that the Zionist entity would pay a price for all of its criminal actions even if that meant going to war with "Israel".


"We have learned that "Israel" wants to swallow the Shebaa Farms operation and he contented himself with what was done, but we understand that "Israel" wants to escape from the military confrontation and go after the men responsible for Wednesday's operation. Accordingly, we used to distinguish between the assassination and military confrontation. We used to respond to any military action. From now on, if any cadre or member of Hizbullah is assassinated, then we will blame it on "Israel" and reserve the right to respond to it whenever and however we choose," he said.

His Eminence also assured: "The "Israeli" army is unable to face the resistance and this what was proven in the field. This is "Israel", which we had defeated in 2006 and in Gaza."

"As we had already said, "Israel" is weaker than the spider's web and will not be other than this," he said, and noted that "the Resistance in Lebanon is in its full readiness and presence."

Sayyed Nasrallah concluded: "Since 1982, we continued to say that the resistance is the answer and that the martyrs are the source of victory."