Chairman of Iranian Parliament's National Security and Foreign Policy Committee Alaeddin Boroujerdi said on Friday that Tehran was keen on Lebanon's stability and stressed it was up to the Lebanese rival factions to resolve the presidential impasse. 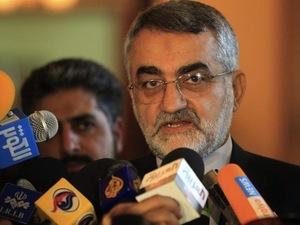 Boroujerdi met with Foreign Minister Jebran Bassil at Bustros Palace and declared, "Tehran gives particular importance to all that leads to the consolidation of security and stability not just in Lebanon but in the entire region".

The Iranian official stated that the presidential deadlock is a local issue and commented, "This is a Lebanese issue but we hope for a quick solution".
Soon after his talks with Prime Minister Tammam Salam at the Grand Serail, Boroujerdi said, "The latest political developments in the region help consolidate stability in Lebanon". He added, "The more ties were consolidated among countries in the region, the more there will be stability".

Boroujerdi also told reporters that Iran's policy is based on building the best of relations with the region's countries, including Saudi Arabia. He stated, "The Iranian FM recently visited Saudi Arabia to represent Tehran in the funeral of Saudi King Abdullah".

When asked about the "Israeli" accusations that Tehran stood behind Hizbullah's deadly attack on an "Israeli" military convoy on Wednesday, Boroujerdi commented by saying: "Hizbullah is a major component of the political society in Lebanon and has MPs and ministers in the Lebanese government".

In parallel, Boroujerdi hoped that his visit to Beirut would lead to the improvement of bilateral ties in all fields.